Here we present the Megalithic monuments that have been found in the island of Samothraki.

First, a few words about Samothraki from an expert:

“Remnants of the human presence on the island are scattered throughout. Emphasis is of course given on the ancient city and the Byzantine fortifications that are associated with periods of intense action on the island and offer a fairly complete picture of its history. Apart from these, however, in a number of other places there are also remains of human settlements and activities, but although they constitute, at a satisfactory degree, an almost uninterrupted human presence, they are often fragmentary.

The oldest figures come from Mikro Vouni, situated on the southwest beach, on the banks of the Polypoudi stream. The finds of the prehistoric tumulus found there, about 10 acres in size, date from the end of the 6th millennium BC to about 1,700 BC. The most important of these are seals and an inscription of Linear A that come from Minoan Crete and reveal trade relations between the two islands.

In the Iron Age, a bit later, several locations are dated throughout the island, with three more important being one at Vrychos, one at Agianemi, a little further south, and one at Gialomandra. In the first, a cyclopean fortification enclosure with irregular boulders and a width of 2.2 to 3.3 m is located. The whole facility was a settlement of the 11th century BC. which was founded there, exploiting, apparently, the natural fortification of the place. And this enclosure, like the modern one but smaller on the hill of Agianemi, seems to reflect the need to move the population for safety reasons inside the island, where the conditions were more favorable than the more advantageous beach. In Gialomandra, on the other hand, megalithic monuments (dolmen) were found near the road between Chora and Paliapolis.”

Next, we present all the official information we found about the monuments:

a) the dolmen of Gialomandra

A sketch showing the side view and the vertical section of the first Dolmen in Gallomandra, like it was in 1928. (Photograph: N.K. Moutsopoulos & I. Demetrokalis, “The dolmens of Gialomandra in Samothraki”, IMXA Symposium about “Historical, Archaeological and Traditional research on Thrace”, 1988, pgs. 17-37, fig. 9-10)

b) An extract from a text by the Archaeologist Aikaterine Balla follows:

“In the 11th century BC certain reasons, probably the attempts to avoid pirate raids, dictated the abandonment of the coastal areas and the movement of the populations within the island.

In the area of ​​Vrychos, on the northern slopes of the hill there were identified already since 1928 three megalithic monuments of the early Iron Age. The extensive fortress enclosure, the ruins of which lie on the narrow, relatively flat top of the hill, has “cyclopean” features. The wall is made of boulders of different sizes and irregular shape, which are “tied” with small stones loosely assembled and form the two strong exterior faces. Its width ranges from 2.20 m to 3.30 m”

c) We also obtained information on the monuments from a PhD thesis:

In the northwest part of Samothraki, at Vrychos Hill, a fortification facility has been fragmentarily investigated. The location is in the island ‘s hinterland at an altitude of 345-365 m, in the semi-mountainous area between the lower arable zone and the upper zone of the central mountain range.

The fortification enclosure of Vrychos occupies the narrow, relatively flat extension of the top of the hill and is structured in two parts, one north and one southern. The southern part is considerably smaller, with an area of ​​1500 square meters, compared to the north which covers a surface of 6000 square meters. The wall has a total length of 600m. and a width of 2-3m. It is built mainly with raw, and rarely with roughly worked, blocks of granite from the area, without the use of binder while the gaps between the joints were filled with small stones. In the higher southern part of the enclosure, the natural configuration of the rock is further exploited as it is incorporated into the fortification and is an integral part of it. At this point the enclosure takes the form of a retaining wall, consisting only of an outer front, with a thickness of 1.80 to 3 m. The thickness of the enclosure in the northern part is larger, from 2 to 3 m, reinforcement apparently dictated by the smoother terrain of this area. 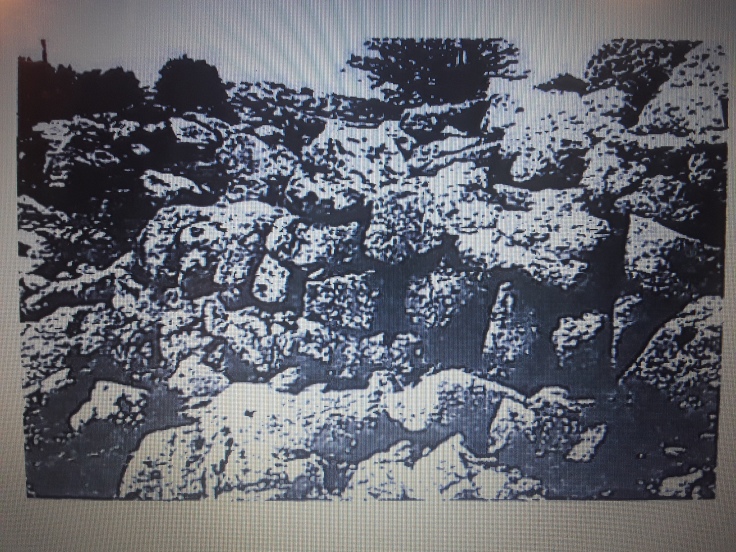 Excavation was focused on a limited extent only in the south part of the enclosure where the coating was relatively thicker. Research brought to light a part of the stone-built foundations of a possibly circular construction. From the dispersion of pottery, there is a possibility of habitation on the slopes of the hill, especially in areas where the slope of the soil is smoother. On the slopes of Vrychos Hill are also found four megalithic burial monuments (11th-6th centuries BC).

In the southern part of Samothraki, at Krimniotissa, at a distance of 700-1000m. from the sea, a fortification facility is located. From this position, the coastal area is controlled and especially the important bay of Pachia Ammos.

The southernmost end of a long-lived natural aisle is fortified by a wall from which a section of 20m is preserved. The wall that protected the hill from the NW side from where a stream flows now, incorporates the physical shape of the rock in three places. The wall is structured either with a single face of boulders, or forms two faces with medium and large stones as well as boulders, with the intermediate gaps filled with small stones and gravel. Its greater width is about 2 meters. while its height reaches 2.90m. A megalithic burial monument (11th-6th century BC) is found to the north.

Surprisingly, we have not managed to find not even one single photograph or video of the above monuments, except from the cyclopean wall photo – which we found in the PhD thesis.

In Palaiopolis, above the sanctuary of the great gods, one can find the following depicted Megalithic remains (the ‘Gate of the Sun’ as it is called): 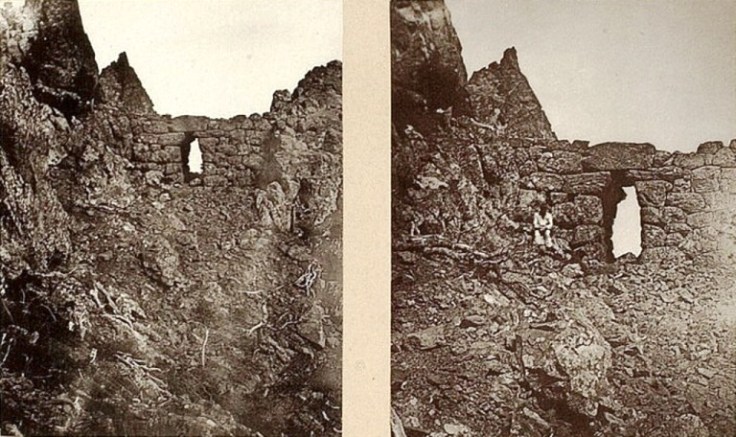 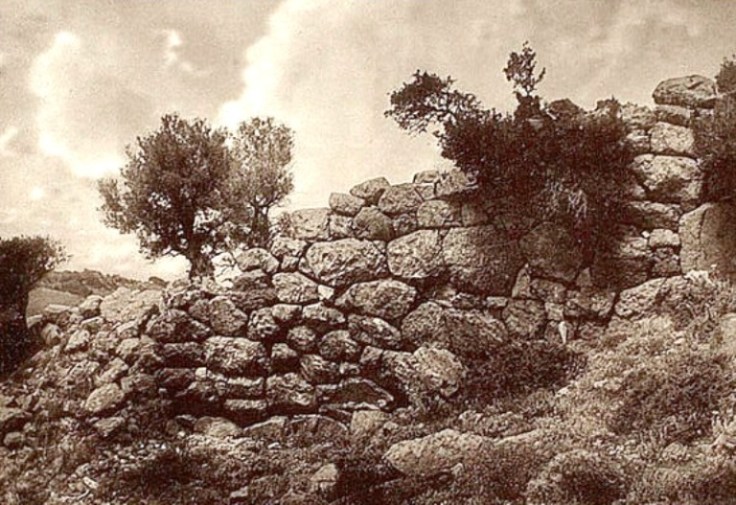 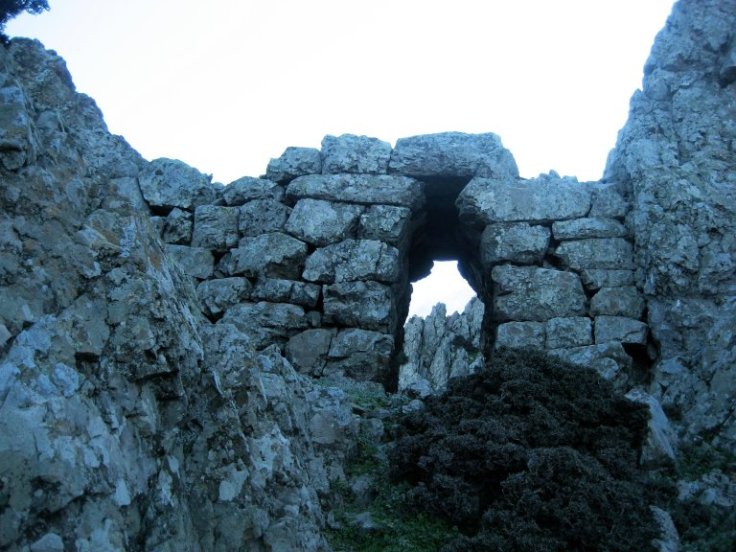 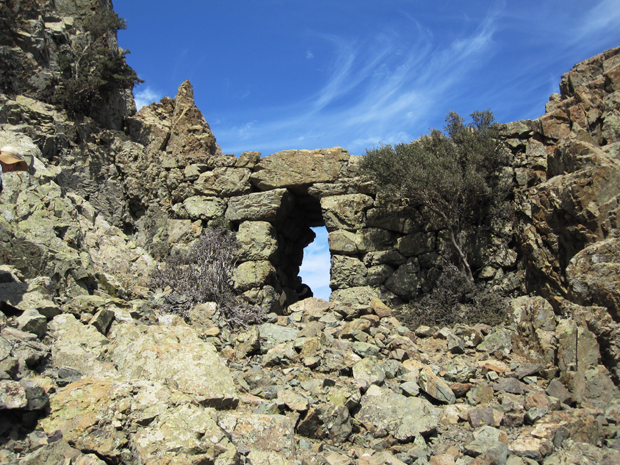 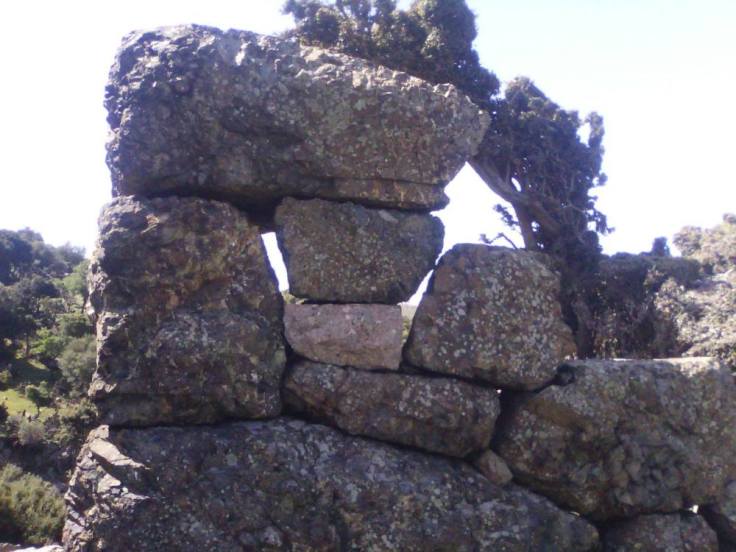 Information from a scientific study on this particular monument could not be found. And we mean formal and proper dating – and not ‘estimate’ – with the modern means and methods available. Generally, none of these monuments has been properly examined for its construction date; the dates we are offered are no more than ‘estimates’ which rely on the discovery of finds (surface or regional) near the monuments.

We believe that this is a completely anti-scientific habit and we shall give an example for our claim. Let’s say that after a 1,000 years from now, some Archeaologist finds near the Parthenon or the Great Pyramid something, whatever, from our era. Using the ‘estimates’ reasoning he should categorize the Parthenon and the Great Pyramid in the 21st century AD. Obviously, our example is a pure exaggeration but one must realize how wrong and misleading is this ‘estimates’ thing. There are a number of standing monuments in our time that had their usage changed over the centuries. When a building stands strong, whoever ‘owns’ it, uses it however they want. Parthenon is a great example of such a monument; it started as a temple of Athena, it was used as a church of the Virgin, then turned to a mosque, etc. 2500 years passed since the beginning! The finds near and around the (any) monument prove nothing about the construction date of it.

As for the supposed ‘historical information’ that is reproduced by a multitude of web pages about ancient Samothraki, the monuments we saw above, and especially the ‘Gate of the Sun’, we strongly reject them. Some people keep insisting on the fairy-tales of ‘Indo-Europeans’, ‘the descent of Greeks from the North’, that the Pelasgians and Thracians were not Greek tribes, etc. How can anyone seriously insist on matters like this, when a good study of Greek Mythology ( =very ancient history, according to Aristotle, among many others), the use of Logic and, of course, the more recent scientific finds, completely abolish these ‘theories’ and ‘doctrines’.

2 thoughts on “Megalithic monuments in the island of Samothraki, Greece”