Orthodox people appeared on the territory of modern China in XIII century. By mutual agreement of Peter I and Kangxi – the fourth emperor (May 4, 1654 – December 20, 1722) of Manchu dynasty — an official mission was sent to China in 1712.

Decrees by Peter I preceded it: On June 18, 1700 he already issued a decree providing a future for Orthodox mission in Beijing: for enlightening Chinese people and inhabitants of Siberia with faith, the tsar together with His Holiness Patriarch Adrian V ordered Metropolitan Varlaam of Kiev, that he appointed a novice “who will become Metropolitan in Tobolsk”. The future Metropolitan had to find assistants for himself.

Same orders were repeated by Peter in 1706 and in 1710, but only in 1711 Kangxi allowed a mission with trade caravans from Russia to be sent. There was a reason for it: that time Emperor Kangxi was seriously ill and set a condition – to send within the Mission a good doctor.

Father Hilarion — a Ukrainian and a graduate of the Kiev Theological Academy — was born in Chernigov. He served in Chernigov, and in Tobolsk from 1702. In 1709 he was promoted to the rank of Archimandrite and abbot of the Yakutsk Monastery of our Savior, as well as the manager in Kirensky and Ilimsky forts with the county.

The main part of legation together with members of the Mission departed on February 3, 1715 and arrived in Beijing at the beginning of 1716.

On June 14, 1728, the famous Treaty of Kyakhta was signed between Russia and China. It summed up more than the century-old relationship between the empires.

The fifth article of the Treaty defined the status and conditions of Mission’s presence in Beijing. China will not only permit the work of Mission, but also pledged to its upkeep at China’s expense. This was subsequently what saved the Mission, because there were times when no incomes from Synod came for its maintenance for several years.

Now in China there are four churches belonging to the Chinese Autonomous Orthodox Church. But unfortunately no service is conducted there because there are no Chinese priests in China. According to Chinese laws non-citizens are not allowed to engage in religious activities.

Celebrations to mark the round anniversary conducted jointly by the Institute of Sino-Christian studies, the Chinese University of Hong Kong and the local Orthodox Brotherhood of Saints Apostles Peter and Paul at the temple in Hong Kong led by rector Archpriest Dionisy Pozdnyaev. Representatives of different regions, countries and nationalities were among the guests and participants who attended the ceremony, great sinologists from Russia and Russianists from China came, as well as the Orthodox clergy of the Russian Orthodox Church and the Russian Orthodox Church Abroad.

Russian delegation was led by Bishop Ephrem (Prosyanok) of Bikin, vicar of Khabarovsk diocese and provost of Khabarovsk Seminary, with the blessing of His Holiness Kirill, Patriarch of Moscow and all Russia.

Honorable and especially anticipated guest was one of the oldest Chinese Orthodox clergy: 87-year-old Archpriest Michael Li (Australia and New Zealand Diocese of the Russian Orthodox Church Abroad). He was ordained by Bishop Victor (Svyatin) half a century ago in China. 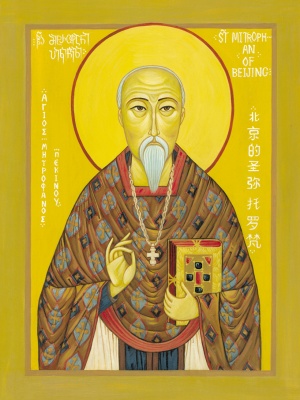 The official celebration took place two days – December 6 and 7. The day before the opening of celebrations, Bishop Ephrem together with the rector the parish of the Holy Apostles Peter and Paul in Hong Kong, Fr Dionysy Pozdnyaev and Department for External Church Relations staff member Dmitry Petrovsky met V.A. Kalinin, Russian Consul General in Hong Kong. During the meeting they raised problems of cultural, educational and spiritual care of our compatriots who are temporarily or continuous live in Hong Kong.

On the first day of celebration, a conference was held at the Institute of Sino-Christian Studies in Hong Kong. Before the start of the excursion around the Institute territory was conducted for the guests, they were shown at Tao Feng Shan a Lutheran church and chapel.

Presentations, talks and round-table discussions were devoted to various aspects of Orthodoxy in China: problems of expansion, translation problems of prayer, missionary and other Orthodox texts, problems of correct perception of the concepts and fundamentals of the belief by Chinese – people with a completely different system of philosophical, religious values and world outlook.

Almost none of the reports remain without vigorous and lively discussion.

Problems of mission in China

Fr Dionisy Pozdnyaev in his presentation on the Orthodox Church in the Chinese context told in details about the status and position of the Autonomous Orthodox Church of China.

As Father Dionisy said the purpose of the mission in Chinese community should be divided into two separate tasks: work in mainland China, which has its own characteristics and legal environment, and the support and spread of Orthodoxy in the Chinese world in other countries around the world, including Russia.

The main problems of the first task:

-Legislation of China, Chinese Orthodox Autonomous Church is legally unformed and therefore unrecognized by the authorities;

-Renewal and strengthening of ties between Russian Orthodox Church and Chinese Autonomous Orthodox Church, which were significantly weakened in the 1950s;

-Lack of Orthodox priests among the Chinese;

-The establishment of institutions of theological education and training of the clergy, as well as the question of the recognition of the Chinese Autonomous Orthodox Church by world Orthodoxy, which is absolutely impossible without substantial support from outside.

Solving these problems is seen in three main directions:

-Awareness of the mission in the Chinese world as the problem of the whole Church;

-Development and coordination of programs for church institutions, aimed at normalizing the situation of the Orthodox Church in China;

-Establishing mechanisms of regular financing of missionary projects concerning preaching of Orthodoxy in the Chinese world.

Father Dionisy emphasized that the state of the Orthodox Church in China at the moment is critical.

As for the complex of problems of the second task, performance of work among the Chinese communion around the world, the main problem is that there is no united integral program of its realization. There are no mechanisms for regular discussion and debate on issues of Orthodoxy in China.

Key mechanisms in charge of the mission among the Chinese are Chinese language proficiency, education and training of Chinese students, conducting laborious work of translating books into Chinese.

Throughout the day with a lunch break following reports and presentations were read:

-the president of the Orthodox Fellowship of All Chinese of China Nelson Mitrophan Chin “Ponomar Project: multilingual computing platform for order of service formation”,

-professor of the Institute of Asian and African Studies of Moscow State University M.V. Rumyantseva “The difficulties of translation of liturgical vocabulary and liturgical texts into Chinese”,

First day of celebration of 300 years anniversary of the Orthodox Mission in China ended with gala dinner on behalf of the Institute of Sino-Christian Studies in Hong Kong.