This post provides information on the excavation and discoveries of a Lower Paleolithic site found on Lesvos Island, Greece.

Abstract Rodafnidia is an Acheulian site on Lesbos Island, in the north-east Aegean Sea. This chapter presents the model that guided Paleolithic investigations on the island, the history of research, and the results of the 2012 expedition of systematic work in the field, which consisted of surface survey and excavation. The typology and technology of lithic artifacts from the surface and the uppermost Unit 1, as well as the first cluster of luminescence dates, firmly place the early component of the site in the Middle Pleistocene. The Acheulian industry derives from fluvio-lacustrine deposits at a locale with abundant fresh-water and lithic resources. Situated in the north-east Mediterranean Basin, an area where research on early hominin prehistory is intensifying, Rodafnidia holds the potential to contribute to Eurasian Lower Paleolithic archaeology and fill the gap in our understanding of early hominin presence and activity where Asia meets Europe.

Introduction Rodafnidia, at Lisvori on Lesbos Island in the north-east Aegean Sea, is a new open-air site with a distinctive Lower Paleolithic component. It lies in a volcanic setting, near the local thermal springs.

The site has produced compelling evidence for the presence of groups who used Acheulian tools on Lesbos (Galanidou 2013; Galanidou et al. 2013).

The Key Geographic Features of Lesbos Guiding the Project Around Lisvori, the island’s Cenozoic volcanic and sedimentary history is mainly manifested by volcanic rocks, volcaniclastic deposits including large ignimbrite bodies and tuffs, siliceous and marly limestones, and geothermal springs. Quaternary deposits are not widespread on Lesbos. However, they are fairly abundant in the south and east part of the island, consisting mainly of clastic ﬂuvial and alluvial deposits.

Glacial periods with accompanying low sea levels were the times for terrestrial animals to disperse onto what are today the islands of the east Aegean Sea. These faunal dispersals likely also encompassed hominin population movements, and Rodafnidia at Lisvori offers archaeological evidence to support this hypothesis, adding a human component to the rich paleontology of Lesbos. Interglacial periods with accompanying high sea levels were key periods that cut Lesbos off from the Asian mainland, producing the insular picture that one sees today (Sakellariou and Galanidou 2016). Such events of land fragmentation occurred several times during the Pleistocene, isolating animal and hominin populations from the large expanses of Anatolia and limiting them to the islands mentioned earlier. 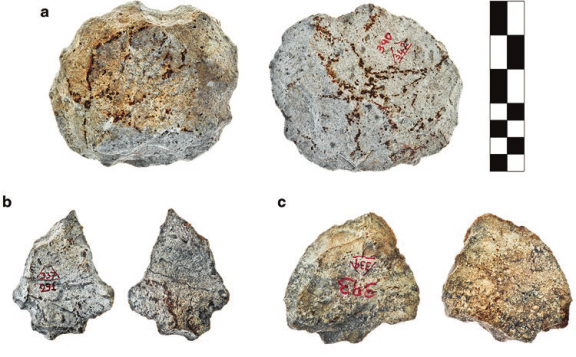 The Site, Its Discovery, and Objectives of Research From the results of the initial investigation it was determined that the distribution of knapped stone artifacts was extensive, ceramic ﬁnds were almost completely absent, and a component of the lithic assemblage was Lower Paleolithic in character, including several Large Cutting Tools (LCTs).

Having ascertained that Rodafnidia had signiﬁcant potential for systematically exploring Middle Pleistocene hominin presence at the junction between Anatolia and the Aegean Archipelago, the University of Crete obtained a permit in 2011 to undertake a 5-year (2012–2016) program of on-site and off-site research in order to:

b) establish a chronological framework for the archaeological record based on relative and absolute dating; and

Put together, this work sheds new light on the history of hominin movements and dispersals between Africa and Eurasia, and on the early occupation of Europe, covering the current lacuna of early sites in south-east Europe and the west Anatolian coast. 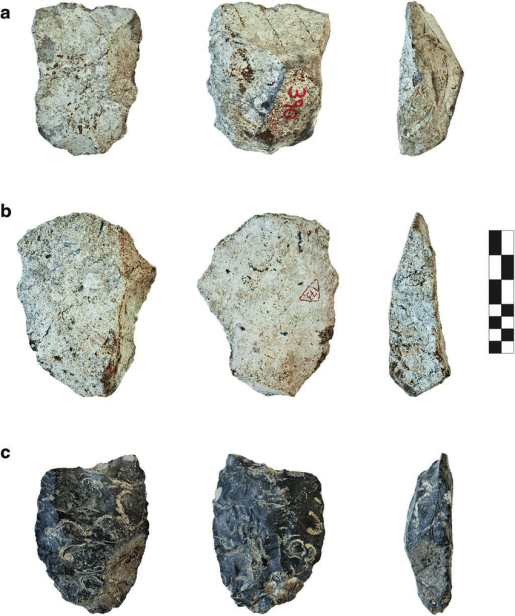 In summary, based upon the surface survey collections and excavations, a working hypothesis has emerged: that the present surface material may have originated from the sub-surface geological features. The presence of a buried channel, or possibly network of channels, across the knoll is suggested by the nature of the geological deposits with a spatial variation in the stratigraphy towards the Kalloni Gulf shore. 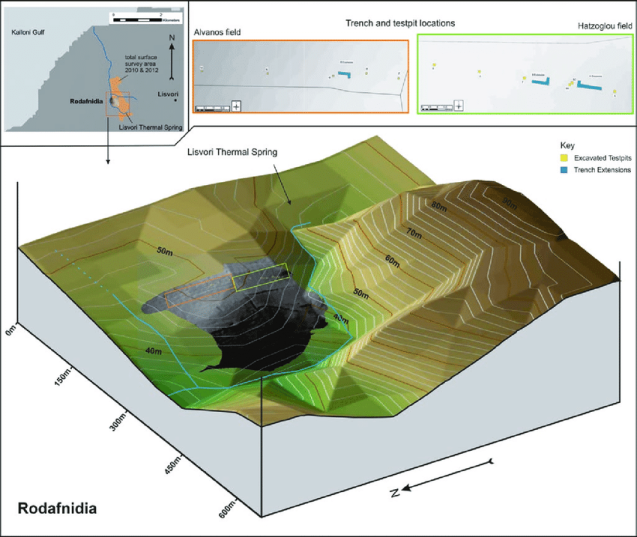 The Lithic Finds The vast majority of Rodafnidia lithic artifacts recovered in 2012 were produced on chert of a wide range of colors. The most common hues are light brown and beige, while dark red-brown is occasionally present. Rarely, black, white, or translucent samples occur. The majority of these cherts are fossiliferous; macro and microfossils are included. Many of them present wood tissue and could be characterised as fossilised remains of plants. Others present faunal (mainly gas-tropod) macrofossils; these are endocasts of the original gastropod shells and provide determinations only to the genus level.

The presence of handaxes and cleavers indicates a Lower Paleolithic component to the Rodafnidia assemblage. Initial observations on the lithic finds collected during the 2010 surface survey suggested a broad similarity between artifacts from Rodafnidia and those from Kaletepe Deresi 3 in Cappadocia, central Anatolia (Slimak et al. 2008), Gesher Benot Ya’aqov in north Israel (Goren-Inbar and Saragusti 1996) and even from certain African assemblages, for example at Olduvai Gorge and elsewhere (Leakey and Roe 1994; Sharon 2007). In light of this, a variation of the methodology applied at the South African Acheulian sites of the Cave of Hearths and Canteen Koppie (McNabb et al. 2004; McNabb and Sinclair 2009; McNabb and Beaumont 2012) was used to conduct a preliminary study of the artifacts. The major technogroups identiﬁed in Rodafnidia lithics are as follows: (1) Large Cutting Tools, (2) Prepared Core Technology (PCT), (3) Non-PCT Flake Cores, (4) Flakes and Detached Pieces, and (5) Retouched Flakes. 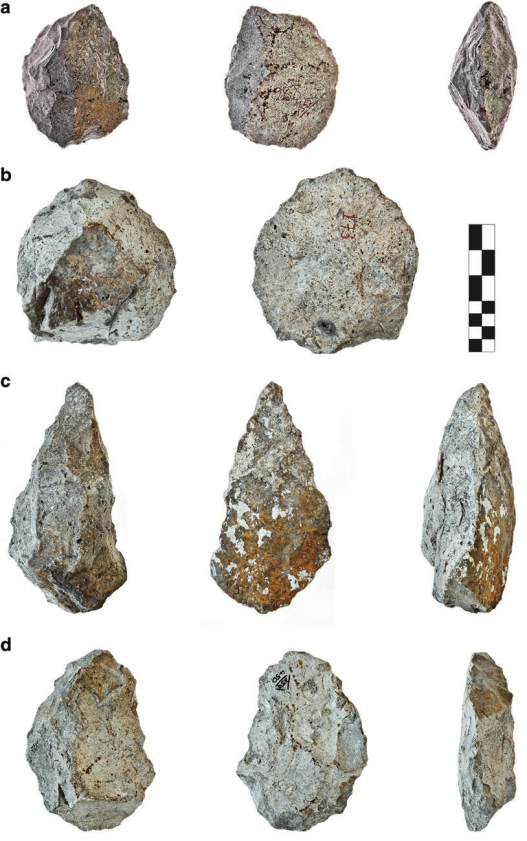 The Large Cutting Tools Technogroup Cleavers represent one of the most interesting aspects of the Rodafnidia Acheulian lithic assemblage. In that a number of cleavers are made on pre-prepared flake blanks, they are closer in concept to the technologically deﬁned Gesher Benot Ya’aqov (GBY) cleavers (Goren-Inbar and Saragusti 1996), than to other non-technologically defined assemblages elsewhere in the Near East.

The Prepared Core Technology Technogroup The two forms of classic Levallois present at Rodafnidia are as follows:

• Radial/centripetal. In practice the cores need not always be circular in their plan form. One example of a radial core in a worn state was found on the surface during field walking.

The Non-PCT Flake Cores Technogroup A single example of a chopping tool is present in the Rodafnidia database, made of a coarse-grained lava and found on the surface during field walking. A number of other cores resemble chopping tools, but their morphology is not sufficiently diagnostic for a confident interpretation. There were two typological discoids, both made by alternate flaking. There is one example of a single platform core, which would class typologically as a core scraper; as well as a spheroid made on lava.

The Retouched Flake Technogroup The Retouched and Modiﬁed Flake technogroup is divided into two broad sub-groups. The first are the flaked flakes. These are a common Lower Paleolithic tool type in which a flake of any size is flaked again by one or more removals. They are not cores, since the intent appears to be the modification of the edge (Ashton et al. 1991). Our database records 12 examples, all having the razor-sharp edges produced by this technique. 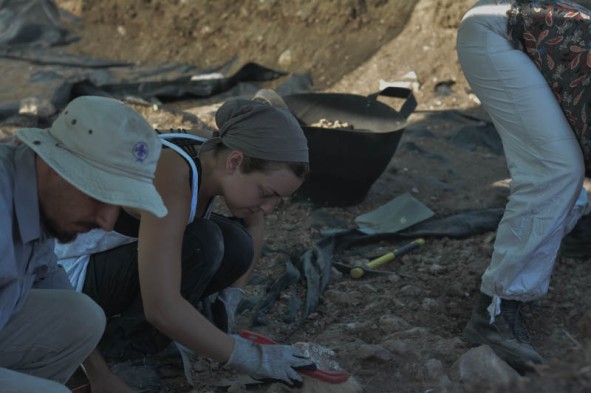 Summary of Lithic Artifact Analysis The artifacts recovered from controlled excavations (Unit 1) and from systematic field walking around the excavated fields (Unit 0) clearly demonstrate the presence of the Acheulian at Rodafnidia. It is possible that Middle Paleolithic groups associated with Levallois technology were also present there.

Discussion Rodafnidia is unique for the richness of an Acheulian lithic assemblage, which has to date no counterpart within the Lower Paleolithic of the Aegean Turkey or Greece (Galanidou 2013; Galanidou et al. 2013). The site therefore stands out as an exciting target for enriching the Lower Paleolithic record of the north-east Mediterranean and for obtaining dates for Acheulian activity. The importance of this site and thence of our project lies in

(i) the time and duration of the hominin and human presence, with pIRSL results suggesting that the upper part of the excavated sequence dates to the Middle Pleistocene.

(ii) The size of the entire site—the Acheulian site may be extensive: explaining the archaeological assemblage distribution forms a central focus for future research. And

(iii) the geography of the site which has a critical element to it: both on a local scale, in a ﬂuvio-lacustrine environment of the Kalloni basin right by geothermal springs, and on a regional scale, with its central geographical position on the border of two continents and the heart of Eurasia.

Introduction This paper introduces a new inter-disciplinary and international research project focused on the Palaeolithic site of Rodafnidia on the Greek island of Lesvos, located in the north-eastern Aegean Sea. Rodafnidia, near the village of Lisvori, is less than a kilometre away from the south-western shore of the large Kalloni Gulf. It is a prolific open-air site spanning the Lower and Middle Palaeolithic. What makes this site unique is the richness of its Acheulean lithic assemblage which, so far, makes it unparalleled in Greece (Galanidou 2004).

A glacial sea-level drop of only 50m would be enough to expose the eastern strait and connect the island with the Asian mainland, allowing hominin and terrestrial animal migration. Several fossiliferous sites have been found in Early Pleistocene deposits on the south coast of the island with over 15 mammal taxa including the giant macaque (Paradolichopithecus arvernensis), which is characterised as continental (Lyras & van der Geer 2007) and reflects a proximity to Anatolia. The site of Rodafnidia introduces the human perspective into the rich palaeontological record of Lesvos and adds a new point to the Palaeolithic map of the north-eastern Mediterranean. 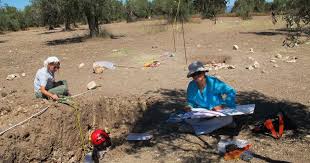 The site: surface survey and excavation methodology In sum, the artefacts recovered from controlled excavations and from field-walking clearly demonstrate the presence of Early Stone Age Acheulean hunters in this locality and possibly Middle Stone Age hominins associated with PCT (Levallois) technology. Within trench extension B it was observed that diagnostic Early Stone Age artefacts were present within the channel fills and a major research question for subsequent seasons will be to clarify the spatial relationship of the various stages of occupation indicated by the Lower Palaeolithic LCTs and the Middle Palaeolithic prepared cores.

Conclusion Rodafnidia stands out as an exceptional and exciting island site, a target for enriching the Palaeolithic record of the north-eastern Mediterranean (e.g. Kuhn 2010) and for obtaining dates of Acheulean activity. The importance of this site, and our project, lies in:

i. The time and length of hominin presence. This covers the Lower and the Middle Palaeolithic; its onset should be placedprovisionally in the Middle Pleistocene.

ii. The size of the site. The Acheulean site may be extensive and the preliminary results presented here suggest that, in comparison to other Lower Palaeolithic sites of Greece and the broader Anatolian region, where large Lower Palaeolithic sites are relatively rare, future research at Rodafnidia has much more to tell us about the Middle Pleistocene settlement of the north-easternMediterranean.

iii. The geography of the site. Rodafnidia’s position locally (in a fluvio-lacustrine environment of the Kalloni basin in a landscape dominated by volcanic rocks) and regionally (a prominent position on the border of two continents) makes it a unique target for research addressing the chronology, timing, direction and pattern of Middle Pleistocene hominin dispersals out of Africa and out of Asia into Europe, and vice versa.

2 thoughts on “Rodafnidia, Lesvos, Greece; Excavation and discoveries from a Lower Paleolithic site”