In this post we present selected parts of the very interesting paper titled “Early art in the Urals: new research on the wooden sculpture from Shigir“, by Mikhail Zhilin et al.

Abstract The carved wooden object uncovered from the Shigir peat bog in the Sverdlovsk region towards the end of the nineteenth century remains one of the oldest, known examples of monumental anthropomorphic sculpture from anywhere in the world. Recent application of new analytical techniques has led to the discovery of new imagery on its surface, and has pushed the date of the piece back to the earliest Holocene. The results of these recent analyses are placed here in the context of local and extra-local traditions of comparable prehistoric art. This discussion highlights the unique nature of the find and its significance for appreciating the complex symbolic world of Early Holocene hunter-gatherers. 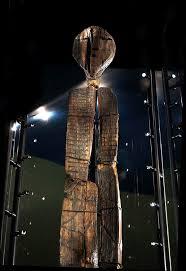 Introduction On 24 January 1894, a wooden sculpture was found during gold mining in the Shigir peat bog about 100km north of Yekaterinburg, in the Middle Urals. Today the area is ﬂooded and no longer accessible. Ten wooden fragments were found about 4m below ground level, and were first identiﬁed by Dmitri Ivanovich Lobanov as a sculpture approximately 2.8m in height. Later, in 1914, Vladimir Yakovlevich Tolmachev reconstructed a much larger sculpture using all of the recovered fragments. Unfortunately, some of those fragments have since been lost, but all the surviving pieces are on display in Sverdlovsk Regional Museum in Yekaterinburg.

The unusual character of the sculpture made it difficult to assign a date from its typology, and indeed it remained undated for decades. In 1997, two large wooden samples were taken from the middle and the bottom part of the figure for conventional radiocarbon dating. Three measurements assigned it to the Boreal Mesolithic period c. 7900–7600 cal BC, making it the oldest wooden monumental sculpture in the world (Savchenko 1999; Lillie et al. 2005; Chairkina 2010).

In 2014, a new investigation was undertaken to provide: 1) a new and more detailed documentation of the figure by means of photographs and drawings; 2) to allow a morphological inspection of  the wood, including the traces of working; 3) a systematic AMS dating program to deliver a more reliable date for the sculpture; and 4) to re-investigate the tree-ring sequence. Investigations and sampling  were performed in Yekaterinburg in June 2014. At the same time, a few decorated bone and antler objects from relevant sites were carefully sampled for AMS dating.

Description The body of the sculpture is covered by a deeply engraved ornamental pattern dominated by zig-zag lines. The flat surfaces also show carved faces, which belong to separate images.

In 2014, during use-wear analysis of the ﬁgure, yet another new face was discovered by Svetlana Savchenko and Mikhail Zhilin in the upper part of the back. In conclusion, eight figural depictions can now be identified, including the faces from the lost fragment attested by Tolmachev’s drawing: the topmost figure with a round carved head, three flat faces on the front plus four flat faces on the back of the body. All of the faces appear distinctly individual.

Morphological and technological inspection of the wood  The sculpture is made from a larch (Larix) tree. The trunk was split into two approximate halves, and a long plank was cut for the production of the anthropomorphic figure. During  early growth, the branches of a larch tree are orientated upright, becoming horizontal or lower with age. In the case of the Shigir plank, the branches of the tree grew upright and their positions enable us to identify that the head of the sculpture was located at the upper end of the tree. The main part of the sculpture is relatively flat and is decorated on both sides.

The tip of the base of the figure is crushed flat through pressure. This is probably due to the sculpture having stood upright for some time after manufacture, with its weight pressing upon the tip of its base. This first caused cracks to appear, until later the sculpture collapsed. The well-preserved surface with very slight traces of abrasion suggests that it floated in water for only a limited period (of a maximum of about one year) before it was finally buried in the underlying sediment.

The head is three-dimensional, with narrow tree rings clearly visible on the top. These rings correspond closely with the narrow rings observed at the very bottom of the sculpture, which were selected for sampling. This suggests that all fragments of the sculpture originally belonged to the same tree trunk. The upper part of the head shows lesions where wood fragments were chipped away. The nose is well sculpted but somewhat compressed, and to the left of it (frontal view) there is a deep, old crack. Double lines were carved below the nose and two incisions above it, with three lines on both sides of the head. The eyebrows gently slope down to the nose, and the eyes are cut into the surface. In both the left and right eyes, the pupil seems to be marked by greater depth, while the left eye is also marked by a knot in the wood where a branch was attached. Together, these features give the head a lifelike appearance. On the right cheek, cut marks, made probably by an adze, are visible, and the chin has clearly been tapered.

The tree rings are visible on different fragments of the body, confirming that all of these belong to the same trunk. The zig-zag decoration on the outer surface was probably  executed in the area of the outermost tree rings (Waldkante). Tree rings can be identified on the surface of the figure and in various carved cuts. All cuts upon the body were made with sharp implements, leaving no compressed wooden tissue from the carving process, suggesting that the sculpture was made of green wood.

The surface of the figure shows repeated evidence of working. The characteristic traces were probably caused by a polished stone adze and two or three different types of polished stone chisel. The adze marks are visible on the bottom part of the sculpture in the shape of long broad scars with even flat surfaces, and without the striations and grooves that would be left by an unpolished adze. Traces left by the chisels are also flat and sharp, and are visible, for example, on the cheeks of the idol and in some of the decorative lines. Differences in the size of the cut marks indicate the use of two or three different chisels. Such sharp traces also support the conclusion that the carving was made in green wood.

The results of these seven new AMS dates conﬁrm the Stone Age attribution, but the difference of up to c. 3000 years requires explanation. The sculpture has been repeatedly restored since it was found. Macroscopic inspection confirmed the use of wax for the conservation, repair and reconstruction of damage incurred during the late nineteenth/early twentieth century. In 1997 the wooden sculpture was treated by conservator Olga Anatolyevna Tuberozova of the Sverdlovsk Regional Museum. Cavities caused by sampling for the initial series of radiocarbon dates were filled with finely ground wood pigment mixed with 10 per cent Butyl acrylate dissolved in acetone and white spirit. The outer surface layer of the figure was stabilised with Butyl acrylate dissolved in acetone and white spirit; the concentration was progressively increased from 3 per cent to 10 per cent. The effects of this treatment would be most marked on the outer surface. Despite careful sample pretreatment, it is possible that the consolidants were not completely removed.

In the late 1990s, an earlier attempt at dating the Shigir figure by the conventional radiocarbon technique was undertaken. Sample material was obtained from cuts to the bottom and middle of the object prior to Butyl acrylate treatment. Three conventional dates were obtained that correspond well with each other, dating the sculpture to c. 7900–7600 cal BC (c. 8700 BP; Boreal period). The homogeneous results of the three earlier dates can be explained by the large samples necessary for conventional radiocarbon dating. Wood from the inner and the outer parts of the tree were probably mixed, giving a mean value for the sample material.

The new results are more reliable and date the Shigir sculpture to an earlier period. Samples 2 and 6 come from the innermost part of the tree, representing its early growth. It was felled around 160 years later. The radiocarbon dates suggest a date of c. 10200 BP for the carving of the sculpture, close to the transition from the Younger Dryas to the Preboreal (c. 9600 cal BC). A strong wiggle in the calibration curve at the transition to the Holocene makes attempts at more accurate dating in this time period almost impossible.