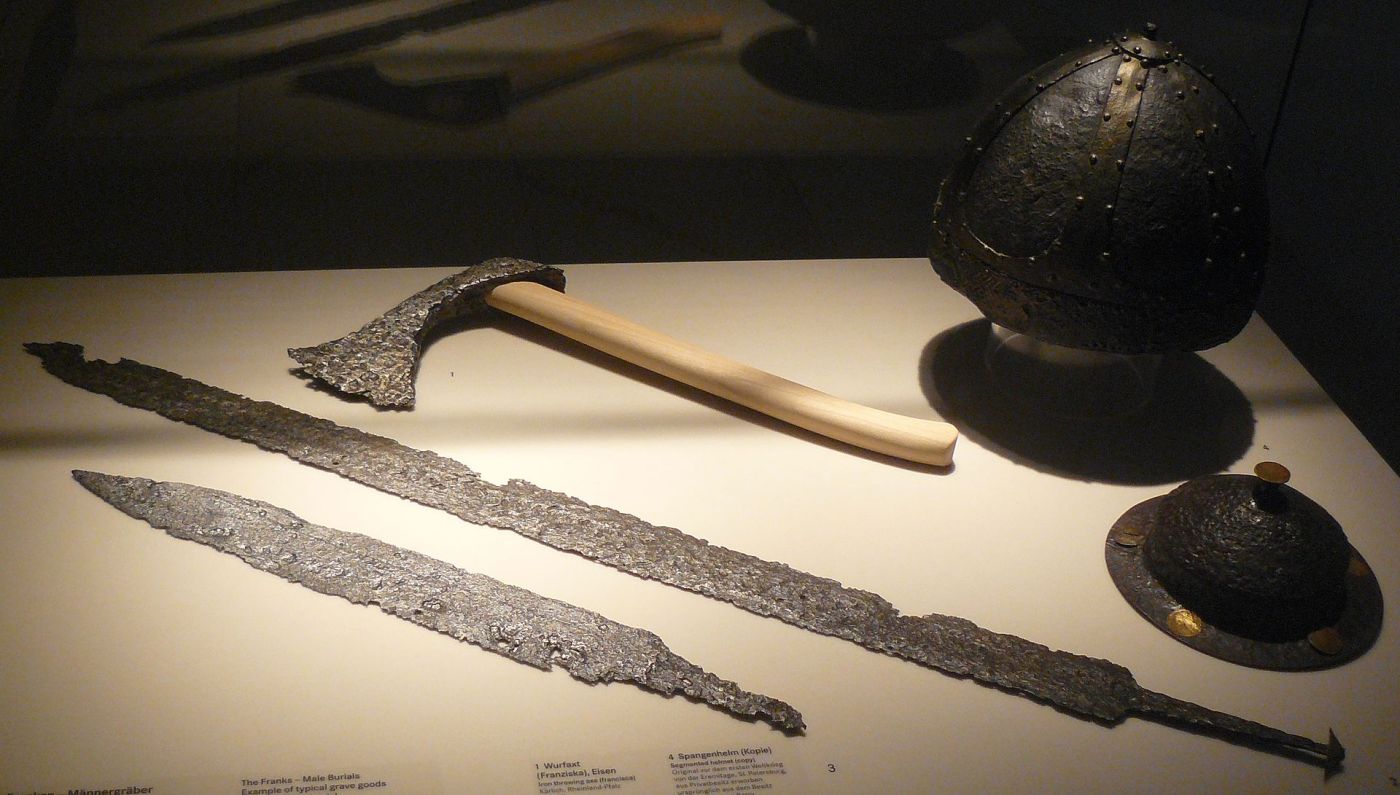 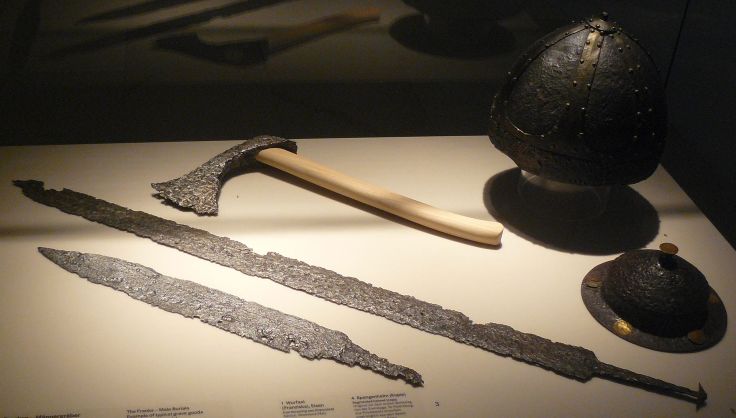 In the decades around 600, significant social change had taken place, centring upon a change in the nature of the aristocracy, which increased its local power in a period of royal minorities. Ripuarian Law, unlike sixth-century Salic Law, mentions free men in the service of others, and that a free man might have what it terms satellites (a term which remains one of the most common terms for a Frankish aristocrat’s followers), further suggesting the increased importance of ties of dependence between aristocrats and lesser freemen, independent of royal service. Aristocratic family identities were stressed and terms such as ‘noble’ (absent in sixth-century sources for the north of Gaul) used to describe these people. By the early eighth century in Neustria (north-western France) even the term ‘the Franks’ could be used to mean only a group of noble lineages. It is clear that the northern Gallic aristocracy was capable of dealing with the kings from a position of much more secure local pre-eminence than had hitherto been the case.

Part and parcel of these changes was the end of old-style taxation. Immunities from royal exactions appear to have increased in number, although these rarely exempted the grantee from military service. At least one extant document, however, expressly states that the king’s officers could not exact the haribannus (at this date a fine for non-performance of military service) within the estates of the beneficiary, presumably implying that the king’s men could not raise troops there either. In other cases, the fact that royal officials could not enter the immunity possibly implied that the estate owner was left to raise troops himself or herself (or, in the case of institutions, itself). In one instance a local dux grants land, specifying that his officials may not enter the estate to collect the haribannus. This might suggest that the dux, Liutfrid, had the right to extract this fine. If so, this would be very interesting, further implying the devolution of the right to raise troops, at least in peripheral areas like Alsace. However, it is also – perhaps equally – possible that the scribe simply borrowed a phrase from a formula referring to royal dues and applied it willy-nilly to an aristocratic donation, regardless of actual rights.

These changes had a bearing on military service. The last reference to a civitas levy seems to be the account of the treachery of the men of Mainz, who began the Frankish army’s flight in battle against the Thuringians in 639. The same story also refers to a contingent from Saintes campaigning hundreds of miles to the east of their homeland, but a passage in Fredegar’s Chronicle for 631 points the way to future developments.  Here we come across the first reference to scarae – bands of chosen warriors. The implication is that military service was now more socially selective, rather than being (theoretically at least) levied upon the whole population of free Franks. This is hardly surprising given the gradual adoption of Frankish identity by almost the whole free population of northern Gaul, noted above. This process may be reflected by the fact that weapon burial seems to become more common in the seventh century. A certain redefinition of social identities, particularly among the élite, was also necessary. It has been argued that, as Frankish identity became universal, the military responsibilities exacted upon the free population were adjusted accordingly. The emergence of a more powerful local aristocracy in the decades around 600 seems to have brought with it the reduction of other members of the free population to dependent (as noted) or even semi-free or unfree status. This might have reduced the numbers of Franks but one imagines that although all Franks continued to be theoretically liable to military service this social group was now too large even if one only counted the heads of families. Military service came to be moderated by wealth, in turn manifested by landholding, as those with real local power used this to secure their place in the army.

However, the power of the Merovingian monarchy after 614 should by no means be underestimated. A document of 694 makes it clear that the obligation to perform military service for the king was still exacted upon landowners. When Theuderic III waged war against the Austrasians in 677 a man called Ibbo refused to go, and was fined a swingeing 600 solidi, to pay which he sold his portion of an estate in the Beauvaisis to the Abbot of St-Denis. Clearly the imposition of military service was still taken seriously. Ripuarian Law fines all those who do not perform the services due to the king when called upon to do so, imposing the sum of 60 solidi on recalcitrants (this sum was later that imposed as the haribannus, when that term meant fine for non-attendance at the muster). The law implies that services could be exacted upon all and sundry; the unfree, including ‘Romans’, who were now subordinate to Ripuarian Franks, have their fine paid by their lord. However, the law makes clear that this is a fine for all types of service: ‘if anyone has been lawfully conscripted by order into the king’s service, or into the army, or into any remaining service’. It seems likely that service in the army was restricted to free men, especially given that a complete call-up of every able-bodied adult male was impractical and probably undesirable – the military worth of the poor semi-free being at best dubious. This clause cannot support the idea of a more general call-up. Haribannus could mean two things: a tax for the support of the army raised from those who were not expected to serve in a military context, and a fine for those who were specifically summoned to attend, but who refused. The late Merovingian sources are unambiguous in talking of haribannus as a fine, but this does not rule out the existence of an ‘army tax’ in this early period. It is probably more likely, however, that between c.650 and c.800 the term broadened in usage from meaning a fine to being used for a due as well.

On the whole, it is difficult to see the use of the old administrative units – civitates and pagi – in the raising of later seventh-century armies. Such levies were perhaps now more selective, although the troops were still called out on the basis of the general obligation of military service. This duty, it would seem, was now laid upon all landowners, rather than upon ‘Franks’. The latter identity was now too widespread. As Ibbo’s case shows, these were the wealthy landowners, too. Possibly, as in sixth-century Aquitaine, there was a difference between landowners and tenants, with the latter contributing to the cost of the subsistence of the army as an army tax. Even in the absence of evidence, an ‘army tax’ would be plausible, in a sense maintaining, but simultaneously redefining, the old distinction between military service and the less prestigious payment of dues. That military service was held to be the more dignified alternative is supported by the Saxons’ successful renegotiation of their dues to the Merovingian kings; instead of paying an annual tribute in cows, they would defend the Franks’ frontier against the Slavs.

Especially given the nature of seventh-century Frankish warfare, it appears that as the seventh century wore on armies were increasingly raised through calling up aristocrats and their dependants, down what one might loosely term a ‘vertical’ chain of lordship and dependence. However, we must see such ties of dependence as forming loose social networks, networks which may have involved gifts of land in exchange for support, and the swearing of oaths of loyalty, but which did not involve formally, let alone legally, established systems of the tenure of land in return for service. Such networks were personal and often informal, and rewards may more often have been in movable goods or even more intangible things such as local backing, support in disputes or intervention in legal cases. As has been seen, an ever messier and more ill-defined situation in the sixth century made it increasingly difficult for post-Roman kings to establish clear-cut relations between landholding and service; it does not seem that aristocrats had as yet created any more clearly defined system. Nevertheless, these factions still fought for control of the royal court for that gave an important degree of legitimacy to the armies which were raised, and to the campaigns that they waged.

The developments of the seventh century did not exclude the continuing importance of age in determining military service. Throughout Gaul, young men still served as pueri in royal and aristocratic households, and received education and training in so doing. Such service created other networks of bonds and ties between the young man’s family and that of his lord, but these career paths may increasingly have been restricted to members of the emerging nobility and their followers. Thus the political strategy of creating links through these ‘apprenticeships’ seems to have become limited to a much narrower peer group.

How armies were raised in Aquitaine is difficult to establish. As far as can be seen, the general mechanisms appear to be the same as for the northern regions. The increasingly  independent dukes of Aquitaine may have been able to raise old style city-based levies but this is never specified. What seems clear is the increasing use of troops from the Basque regions. By the middle quarters of the eighth century Frankish writers even referred to Aquitaine as Vasconia. The reasons for this apellation are difficult to determine for sure. A possibility is that the Aquitanian dukes may actually have focused a political identity in opposition to the northern Franks on the Vascones, on the basis of the Basques’ military importance. This would be a similar process to that which had happened earlier in other regions. As it was, the Frankish conquest nipped the process in the bud and from 780 an Aquitanian regional identity was promoted. 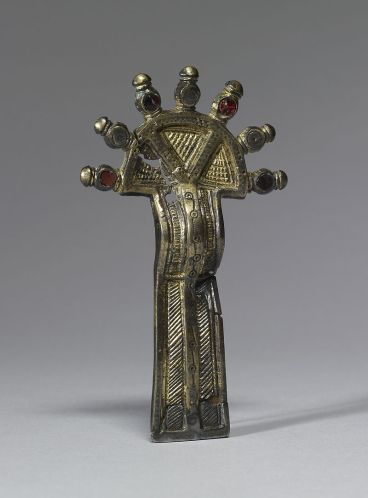