In this post we present and analyze excerpts from Homer’s Iliad which refer to Aphrodite.

English: “Strange goddess, why art thou minded to beguile me thus? Verily thou wilt lead me yet further on to one of the well-peopled cities of Phrygia or lovely Maeonia, if there too there be some one of mortal men who is dear to thee, seeing that now Menelaus hath conquered goodly Alexander, and is minded to lead hateful me to his home. It is for this cause that thou art now come hither with guileful thought. Go thou, and sit by his side, and depart from the way of the gods, neither let thy feet any more bear thee back to Olympus; but ever be thou troubled for him, and guard him, until he make thee his wife, or haply his slave. But thither will I not go — it were a shameful thing — to array that man’s couch; all the women of Troy will blame me hereafter; and I have measureless griefs at heart.”

Then stirred to wrath fair Aphrodite spake to her: “Provoke me not, rash woman, lest I wax wroth and desert thee, and hate thee, even as now I love thee wondrously; and lest I devise grievous hatred between both, Trojans alike and Danaans; then wouldst thou perish of an evil fate.”

More accurate English translation: “Demoniac, why do you desire to deceive me with these? To which well-inhabited distant cities will you guide me, of Phrygia or lovely Maeonia, if there too there be some one of mortal men who is dear to thee? Since Menelaus has beaten δῖος* Alexander and wants to lead me, the hateful, back home, because of him you came here now δολοφρονέουσα**? Go sit beside him, and leave the road of the gods, neither return to Olympus with your feet, but always strive/toil for him and guard him, until he makes you either ἄλοχον*** or even a slave. But I’m not going there -it would be a shameful thing- to take care of/nurse his bed; and all the Troads (the women of Troy) will reprove me back there; I have measureless griefs at heart”

Resentful then spoke to her δῖα* Aphrodite: “Do not stir me to anger/provoke me you miserable/wretched woman, and in my anger I desert you, and hate you as much as I exceedingly loved you until now, and machinate disastrous rivalries between the two, Trojans and Danaans, and you perish with a bad death”

*δῖος/δῖα is very often translated as “heavenly, divine, noble”, but often in Homer, it also receives the meaning of “outstanding, distinguished, distinct, prominent”, i.e. the word denotes ‘importance’. Clearly, the word here is used with the latter meaning.

NovoScriptorium: In this excerpt Homer attacks the Passion of Lust and Carnal Worship. To do this, he uses the idol of Aphrodite (which represents anything linked to the aphrodisia) and Helen, as the assailant.

The use of the words ‘demoniac’ and ‘δολοφρονέουσα‘ leaves no doubt as to the opinion Homer wants to express about the uncontrolled use of the aphrodisia. Their wrong usage is identified almost as the ‘absolute evilness‘; they can lead Man to a ‘demonic’ state; they can lead Man to the pathetic condition of internal slavery; to the humiliation of being enslaved to a Passion that henceforth defines his existence (“become a partner of a mortal’s bed or even a slave to a mortal”); they can make Man ‘δολοφρονέων‘, with all the consequences that shall unavoidably follow this; they can take Man out of the Divine Road and make him lose his connection to the Divine World (“leave the road of the gods and return not to Olympus”). The wrong use of the aphrodisia is accused of being the absolute ‘deceit’.

Let us recall at this place our previous analysis on what ‘Olympus‘ represents. Then, if by ‘Olympus‘ the ‘shining place of the deceased‘ is meant (and, of course, we must always have in mind that the ‘eternal gods dwell there’, i.e. ‘Olympus’ is considered to be a divine and eternal place), then, obviously, Homer here suggests that the wrong usage of the aphrodisia can ‘close‘ the road to ‘Olympus‘ for Man, i.e. the road to Eternal Apathy, Tranquillity and Harmony of living close to/together with the Divine.

The word ἄλοχος also has the meaning of ‘wife’. Therefore, depending on their usage and evaluation, two are the final ends where the aphrodisia can lead (while being alive): a) Family, and b) enslavement to the Passion of Lust.

Through Aphrodite’s answer to Helen, Homer exposes here the quick, sudden and violent changes in temper/mood that lustful lovers may show/display, when one of the two parts is no longer as ‘faithful’ as the empassionate other half ‘demands’; “stir me to anger“, “in my anger I desert you“, “hate you as much as I exceedingly loved you until now“, “machinate disastrous rivalries“, “you perish with a bad death“!!! These are truly ‘demonic’ words!!! And they indeed describe the condition of, the enslaved/surrendered to this destructive Passion, Man.

English: He the while had gone in pursuit of Cypris with his pitiless bronze, discerning that she was a weakling goddess

More accurate English translation: he was then hunting Cypris with merciless bronze, knowing how ἄναλκις** godess she was

*Κύπρις = another ancient name for Aphrodite, referring to her connection with the island of Cyprus

NovoScriptorium: What Homer indirectly tells us here is that the involvement with the aphrodisia make Man ‘weak‘: “ἄναλκι” =  without strength, impotent, feeble

English: Keep thee away, daughter of Zeus, from war and fighting. Sufficeth it not that thou beguilest weakling women?

More accurate English translation: Leave, daughter of Zeus, from war and battle; isn’t it enough for you to deceive ἀνάλκιδας* women?

NovoScriptorium: Homer emphasizes that women are deceived easier (than men?) by the aphrodisia due to them being (by Nature?) “without strength, impotent, feeble”. Indirectly, it is suggested that to avoid being deceived by the aphrodisia, Man (male or female) must become ‘strong, potent’. The resistance to the bad influence of the aphrodisia is apparently considered as ἀνδρεία ( = manliness, manly spirit, as an opposite to δειλία/cowardice/timidity). Taking into account the first excerpt we analyzed above, we receive a few more interesting conclusions:

It needs ἀνδρεία and constant struggle (inside and outside) to:

What we have examined so far make us believe that Homer must have suggested somewhere in his writings the appropriate usage of the aphrodisia. It wouldn’t be reasonable only to reject without proposing. Indeed, we have found such an excerpt:

English: So spake she, but the father of men and gods smiled, and calling to him golden Aphrodite, said: “Not unto thee, my child, are given works of war; nay, follow thou after the lovely works of marriage”

More accurate English translation: So spake she, and the father of men and gods smiled, and called golden Aphrodite and told her: “My child, to you are not given the works of war, but you should go after/attend to the full of love/desire works of marriage”

NovoScriptorium: Not at all coincidentally, Homer places Zeus, “the father of men and gods” to provide the answer we seek. The appropriate usage of the aphrodisia is then considered to be only inside Marriage. It appears not to be just ‘Homer’s opinion’, but, rather, a deeply rooted -in both Society and Time- Theological thesis. We have discussed elsewhere that “Zeus” was but a conventional name of the Greek Theologists/Philosophers used to describe the Actual/True Being (or, simply, ‘God’). Therefore, what Homer presents here can be undoubtedly considered as what was then  believed as ‘Divine Will‘ on the issue. The aphrodisia are ‘blessed’ (Homer names Aphrodite ‘golden‘ in this case – ‘gold’ was one of the factors indicative of one’s well-being, as described in the Iliad) when we enjoy them inside Marriage, while they can be completely destructive when experienced outside Marriage. The wrong usage of the aphrodisia may have severe effects for both this life and the eternal one. 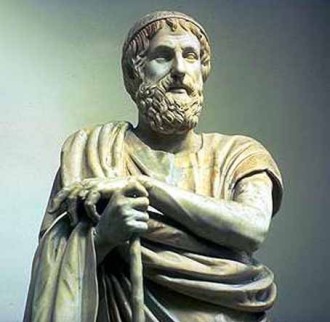