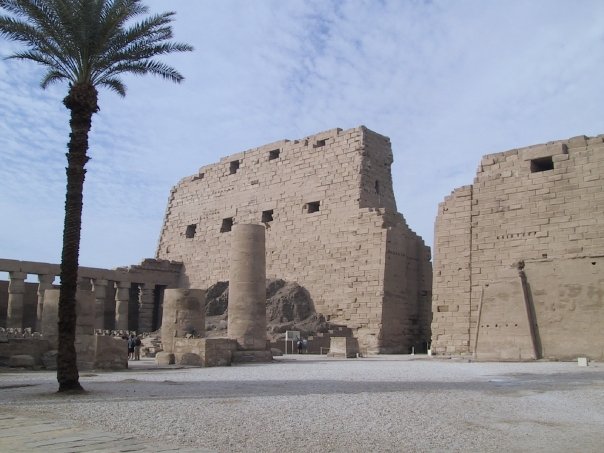 This post is mostly a photographic presentation of monuments from Karnak, Egypt.

The Karnak Temple Complex commonly known as Karnak, comprises a vast mix of decayed temples, chapels, pylons, and other buildings near Luxor, in Egypt. Construction at the complex began during the reign of Senusret I in the Middle Kingdom (around 2000–1700 BC) and continued into the Ptolemaic period (305–30 BC), although most of the extant buildings date from the New Kingdom. The area around Karnak was the ancient Egyptian Ipet-isut (“The Most Selected of Places”) and the main place of worship of the Eighteenth Dynasty Theban Triad with the god Amun as its head. It is part of the monumental city of Thebes.

The key difference between Karnak and most of the other temples and sites in Egypt is the length of time over which it was developed and used. Construction of temples started in the Middle Kingdom and continued into Ptolemaic times. Approximately thirty pharaohs contributed to the buildings, enabling it to reach a size, complexity, and diversity not seen elsewhere. Few of the individual features of Karnak are unique, but the size and number of features are overwhelming. The deities represented range from some of the earliest worshiped to those worshiped much later in the history of the Ancient Egyptian culture. Although destroyed, it also contained an early temple built by Amenhotep IV (Akhenaten), the pharaoh who later would celebrate a near monotheistic religion he established that prompted him to move his court and religious center away from Thebes.

The history of the Karnak complex is largely the history of Thebes and its changing role in the culture. Religious centers varied by region, and when a new capital of the unified culture was established, the religious centers in that area gained prominence. The city of Thebes does not appear to have been of great significance before the Eleventh Dynasty and previous temple building there would have been relatively small, with shrines being dedicated to the early deities of Thebes, the Earth goddess Mut and Montu. Early building was destroyed by invaders. The earliest known artifact found in the area of the temple is a small, eight-sided column from the Eleventh Dynasty, which mentions Amun-Re. Amun (sometimes called Amen) was long the local tutelary deity of Thebes. He was identified with the ram and the goose. The Egyptian meaning of Amun is “hidden” or the “hidden god”.

Major construction work in the Precinct of Amun-Re took place during the Eighteenth Dynasty, when Thebes became the capital of the unified Ancient Egypt. Almost every pharaoh of that dynasty added something to the temple site. Thutmose I erected an enclosure wall connecting the Fourth and Fifth pylons, which comprise the earliest part of the temple still standing in situ. Hatshepsut had monuments constructed and also restored the original Precinct of Mut, that had been ravaged by the foreign rulers during the Hyksos occupation. She had twin obelisks, at the time the tallest in the world, erected at the entrance to the temple. One still stands, as the tallest surviving ancient obelisk on Earth; the other has broken in two and toppled. Another of her projects at the site, Karnak’s Red Chapel or Chapelle Rouge, was intended as a barque shrine and originally may have stood between her two obelisks. She later ordered the construction of two more obelisks to celebrate her sixteenth year as pharaoh; one of the obelisks broke during construction, and thus, a third was constructed to replace it. The broken obelisk was left at its quarrying site in Aswan, where it still remains. Known as the unfinished obelisk, it provides evidence of how obelisks were quarried.

Construction of the Great Hypostyle Hall also may have begun during the Eighteenth Dynasty (although most new building was undertaken under Seti I and Ramesses II in the Nineteenth). Merneptah, also of the Nineteenth Dynasty, commemorated his victories over the Sea Peoples on the walls of the Cachette Court, the start of the processional route to the Luxor Temple. The last major change to the Precinct of Amun-Re’s layout was the addition of the First Pylon and the massive enclosure walls that surround the whole precinct, both constructed by Nectanebo I of the Thirtieth Dynasty.

3 thoughts on “Monuments from Karnak, Egypt”