“Religion”* as an ideological system

When we say that “Orthodoxy is not a religion* in the usual sense of the word”, we are clearly implying that the term “religion” is not used in the Bible.

When we speak of “religion”, we mean an organized, world-theory system. In other words, we associate it with a group of people who have a specific IDEOLOGY, which they promote. And it is precisely this element that we reject in Orthodoxy. Because Orthodoxy IS NOT an ideological system. It IS NOT a philosophy, OR a theoretical fabrication. Orthodoxy is a PRACTICAL psychotherapeutic method.

Furthermore, Orthodoxy IS NOT a man-made fabrication, or an organization by people. It is a God-human institution, and the Body of Christ. 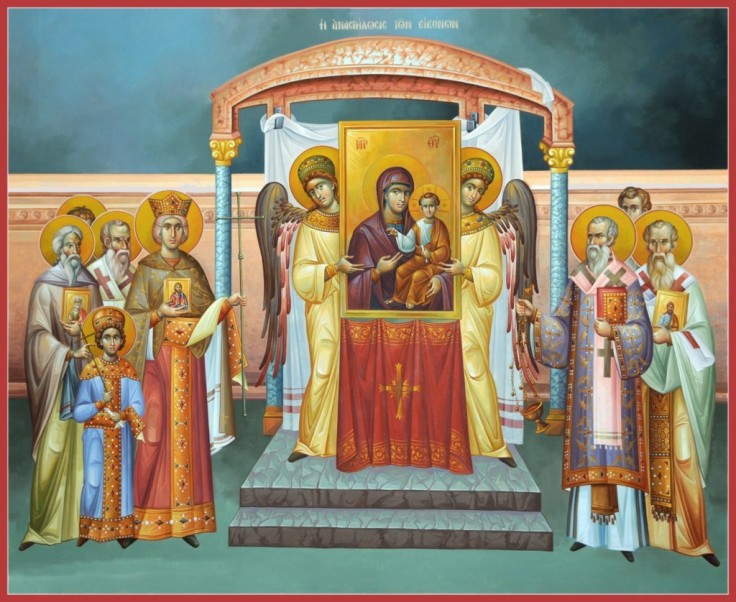 “Thriskia”* in the sense of “worship”

“Religion” (=”Thriskia”, as found in the ancient Greek text) in the New Testament denotes: “the sum of a person’s acts of faith” (aka “worship”) , and not “the group”, which may or may not be real, or, which can supposedly be compared to other “groups” of people. Let’s take a look at an example from within the Holy Bible:

26 If anyone among you thinks he is religious*, and does not bridle his tongue but deceives his own heart, this one’s religion is useless. 27 Pure and undefiled religion before God and the Father is this: to visit orphans and widows in their trouble, and to keep oneself unspotted from the world. (James 1: 26-27)

It is obvious to every logical person, that James here is referring to PERSONS “worship”, and not to “religion” in the sense of a group. This is made evident in verse 26, where we read “anyone among you” – in other words, “anyone WITHIN THE CHURCH”. James uses words like “you”, “he”, “his”, “one’s”…

ALL other verses in the New Testament that use the word “religion” are similar to the above. Let’s look at another one:

5…that according to the strictest sect of our religion I lived as a Pharisee. (Acts 26: 5) Here, the Apostle Paul -with the words “I lived”- clarifies that he is referring to a way of life, to a “practicing of his religion*” of the Pharisees, and not to the group of Pharisees per se.

Similarly, in Colossians 2:18, (NKJV) he speaks of the “worship of angels” (“θρησκεία* των αγγέλων”). According to the inference here, he is referring to the way of worshipping angels that was customary at that time, and not to any specific group that worshipped angels. Because the inference speaks of “religious practices” and not of ideological groups. We see here, that the word “Thriskia” is correctly translated as “worship”, and not as “Religion”.

This is also clearly evident in Colossians 2:23, where it mentions “self-imposed religion” (εθελοθρησκεία*) ; in other words, it is telling us of “the method of worship that the individual person prefers, and not the way that God wants”.

Thus, because Orthodox Christians “PRACTICE their faith”, we also frequently use, in modern Greek the term “Thriskia”* in this sense, but not in the sense of an “ideological system” that is used nowadays for the word “religion”*.

The consequences of the Scriptural meaning

If we take into account the Scriptural meaning of the word “Thriskia”*, we come to perceive something extremely important, which various other “religions” are unable to perceive (in the ideological sense of the word). They tend to transfuse today’s meaning of the word into the New Testament era, and thus come to believe that the Holy Bible is referring to “ideological systems”. They speak of a “true religion” – and they even quote Scriptural passages to show us the “characteristics” that a true faith supposedly has – in order to conclude that a religion with such characteristics is assuredly a true religion, therefore, by using this “façade” that they flaunt, they present themselves as being the “true religion”.

But as we saw above, the Holy Bible DOES NOT SPEAK OF RELIGIONS, only THE MEANS OF EXPRESSING one’s faith, INDIVIDUALLY. When -for example- the Holy Bible speaks of the “fruits of the tree”, that tree IS NOT “religion”*; it is the faithful person. When it speaks of a “pure and undefiled religion”*, it is not referring to any ideological system; it is referring to a “pure and undefiled way of expressing one’s faith/worship”.

With these in mind, we not only comprehend the Holy Bible in a better manner; we are enabled to suitably confront the cacodoxies of a heretic/“religious fanatic”, and we can also better appreciate the superiority of the Orthodox Church as a “pure and undefiled religiousness” and not an “ideological system”.

The world has had its fill of ideological systems. What we need is a “practical psychotherapy”.

[*] In the ancient Greek text, we find the word Θρησκεία “Thriskia” which today should not be translated as “Religion” but as “Worship”. In modern Greek, the same word “Thriskia”, means also “religion”, thus, when translators translate from ancient Greek to English, they make this mistake.