Here we bring to our readers’ knowledge the very interesting paper “Hellenistic Information in China” by Yang, Juping. 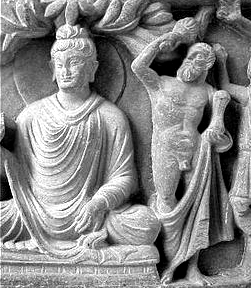 1§1 This paper is one of the series of research results for my program “Hellenistic Civilization and the Silk Road.”[1]

1§2 Hellenistic Civilization originated and developed in a new world established by Alexander the Great and his successors and was the result of mutual contacts, exchanges, and fusion between Greek and other eastern civilizations. Without doubt the Greek element played the leading and positive role in the formation of this new civilization. Greek-styled cities, coins, theaters, gymnasiums, Greek statues, inscriptions, myths, especially the story of Troy and the gods on Olympus, and even Greek ideas of philosophy and religion all more or less appeared or reappeared in this so-called Hellenistic World. (Plate 1) Even if the kingdoms of Greeks or Indo-Greeks had disappeared the influences of Hellenistic Civilization still existed and remained for a long time. Of course Hellenistic culture was only created and enjoyed by the upper-class societies of the Hellenistic cities. Those local people who lived in the remote and extensive countryside and mountains might have still kept their indigenous cultural tradition.

1§3 The emergence of the Silk Road from China to the Mediterranean was linked with the legendary trip of a Chinese envoy, Zhang Qian (張騫), in the Western Regions (Xiyu, 西域[2]) outside of the domain of China by that time. He was sent by the Emperor Han Wudi (漢武帝) to search for the Dayuezhi people (大月氏[3]) in order to unite them against a common enemy, Xiongnu (匈奴). He departed from the capital of Han China, Chang An (長安) in 139 BC, and returned in 126 BC. Unfortunately he could not fulfill his mission because the Dayuezhi had lost interest in revenge on the Xiongnu. However, he entered into Central Asia as far as Bactria and first brought back information on the areas and countries he visited or heard of. The related records in the “DayuanLiezhuan” (“大宛列傳,” “Collective Biographies of Dayuan”) of Shiji (史記, The Records of the Grand Scribe) by Sima Qian（司馬遷) were just copied from his report to the Emperor. Because most of these lands were or had been controlled by Hellenistic kingdoms, whom he met and what he knew in large part must have been the legacies of Hellenistic Civilization. From then on, the political and commercial relations between China and the Western Regions began to be established, and the famous Silk Road was finally opened, which largely covered or passed through the previous Hellenistic world.[4] So with the extending and continuation of the Silk Road, Hellenistic cultural remains were naturally brought into China by those travelers on the road such as envoys, merchants, and monks, and they probably left some clues and marks in the historical documents and extant cultural relics in China.

1§4 It is based on this presupposition that I began my research in this field. I think in these records and relics, Hellenistic information has been mirrored mainly in six aspects: (1) cities founded or rebuilt by Alexander and his successors; (2) coins once current in the Hellenistic world and imitated or transformed by other later rulers or dynasties; (3) common language (Koine) and writing; (4) the spread and change of Ghandaran art; (5) the Sino-Kharoasthi coins; (6) other works of art discovered in China. Generally, the former three aspects were hidden or expressed in the Chinese historical documents, and the other three could be discerned in the Buddhist temples and museums.

(You can read the complete work here: http://www.chs-fellows.org/2014/10/03/hellenistic-information-in-china/)