The Huns force the Goths into the Empire. Battle of Adrianople, 378

Previous to the year 375 the attempts of the Germans to penetrate into the Empire appear to have been due to their love of adventure, their hope of enjoying some of the advantages of their civilized neighbors, or the need of new lands for their increasing numbers. And the Romans, by means of their armies, their walls, and their guards, had up to this time succeeded in preventing the barbarians from violently occupying their
territory.

But suddenly a new force appeared which thrust the Germans out upon the weakened Empire. The Huns, a Mongolian folk from central Asia, swept down upon the Goths, who were a German tribe settled upon the Danube, and forced a part of them to seek shelter across the river, within the boundaries of the Empire. Here they soon fell out with the imperial officials, and a great battle was fought at Adrianople in 378 in which the Goths defeated and slew the emperor, Valens. The Germans had now not only broken through the boundaries of the Empire, but they had also learned that they could defeat the Roman legions. The battle of Adrianople may, therefore, be said to mark the beginning of the conquest of the western part of the Empire by the Germans. For some years, however, after the battle of Adrianople the various bands of West Goths–or Visigoths, as they are often called–were induced to accept the terms offered by the emperor’s officials and some of the Goths agreed to serve as soldiers in the Roman armies.

Before long one of the German chieftains, Alaric, became dissatisfied with the treatment that he received. He collected an army, of which the nucleus consisted of West Goths, and set out for Italy. Rome fell into his hands in 410 and was plundered by his followers. Alaric appears to have been deeply impressed by the sight of the civilization about him. He did not destroy the city, hardly even did serious damage to it, and he gave especial orders to his soldiers not to injure the churches or take their property. (*)

Alaric died before he could find a satisfactory spot for his people to settle upon permanently. After his death the West Goths wandered into Gaul, and then into Spain, which had already been occupied by other barbarian tribes,–the Vandals and Suevi. These had crossed the Rhine into Gaul four years before Alaric took Rome; for three years they devastated the country and then proceeded across the Pyrenees. When the West Goths reached Spain they quickly concluded peace with the Roman government. They then set to work to fight the Vandals, with such success that the emperor granted them a considerable district (419) in southern Gaul, where they established a West Gothic kingdom. Ten years after, the Vandals moved on into Africa, where they founded a kingdom and extended their control over the western Mediterranean. Their place in Spain was taken by the West Goths who, under their king, Euric (466-484), conquered a great part of the peninsula, so that their kingdom extended from the Loire to the Straits of Gibraltar.

General dismemberment of the Empire in fifth century

It is quite unnecessary to follow the confused history of the movements of the innumerable bands of restless barbarians who wandered about Europe during the fifth century. Scarcely any part of western Europe was left unmolested; even Britain was conquered by German tribes, the Angles and Saxons.

Attila and the Huns

To add to the universal confusion caused by the influx of the German tribes, the Huns, the Mongolian people who had first pushed the West Goths into the Empire, now began to fill western Europe with terror. Under their chief, Attila,–“the scourge of God,” as the trembling Romans called him,–the savage Huns invaded Gaul. But the Roman inhabitants and the Germans joined against the invaders and defeated them in the battle of Châlons, in 451. After this rebuff Attila turned to Italy. But the impending danger was averted. Attila was induced by an embassy, headed by Pope Leo the Great, to give up his plan of marching upon Rome. Within a year he died and with him perished the power of the Huns, who never troubled Europe again. Their threatened invasion of Italy produced one permanent result however; for it was then that fugitives from the cities of northeastern Italy fled to the sandy islets just off the Adriatic shore and founded the town which was to grow into the beautiful and powerful city of Venice. 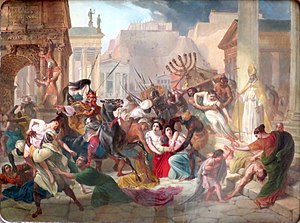 The year 476 has commonly been taken as the date of the “fall” of the Western Empire and of the beginning of the Middle Ages. What happened in that year was this. Since Theodosius the Great, in 395, had provided that his two sons should divide the administration of the Empire between them, most of the emperors of the West had proved weak and indolent rulers. The barbarians wandered hither and thither pretty much at their pleasure, and the German troops in the service of the Empire amused themselves setting up and throwing down puppet emperors. In 476 the German mercenaries in the Roman army demanded that a third part of Italy be given to them. On the refusal of this demand, Odoacer, their leader, banished the last of the western emperors (whose name was, by the irony of fate, Romulus Augustus the Little) to a villa near Naples. Then Odoacer sent the insignia of empire to the eastern emperor with the request that he be permitted to rule Italy as the emperor’s delegate, thus putting an end to the line of the western emperors.

It was not, however, given to Odoacer to establish an enduring German kingdom on Italian soil, for he was conquered by the great Theodoric, the king of the East Goths (or Ostrogoths). Theodoric had spent ten years of his early youth in Constantinople and had thus become familiar with Roman life. Since his return to his people he had been alternately a dangerous enemy and an embarrassing friend to the eastern emperor. The East Goths, under his leadership, had harassed and devastated various parts of the Eastern Empire, and had once threatened the capital itself. The emperor had repeatedly conciliated him by conferring upon him various honors and titles and by making large grants of money and land to his people. It must have been a great relief to the government when Theodoric determined to lead his people to Italy against Odoacer. “If I fail,” Theodoric said to the emperor, “you will be relieved of an expensive and troublesome friend; if, with the divine permission, I succeed, I shall govern in your name and to your glory, the Roman Senate and that part of the Empire delivered from slavery by my victorious arms.”

The struggle between Theodoric and Odoacer lasted for several years, but Odoacer was finally shut up in Ravenna and surrendered, only to be treacherously slain a few days later by Theodoric’s own hand (493).

The East Goths in Italy

The attitude of the East Goths toward the people already in possession of the land and toward the Roman culture is significant. Theodoric put the name of the eastern emperor on the coins that he issued and did everything in his power to insure the emperor’s approval of the new German kingdom. Nevertheless, although he desired that the emperor should sanction his usurpation, Theodoric had no idea of being really subordinate to Constantinople.

The invaders appropriated one third of the land for themselves, but this was done with discretion and no disorder appears to have resulted. Theodoric maintained the Roman laws and institutions, which he greatly admired. The old offices and titles were retained, and Goth and Roman lived under the same Roman law. Order was restored and learning encouraged. In Ravenna, which Theodoric chose for his capital, beautiful buildings that date from his reign still exist.

The East Goths were Arian heretics

On his death in 526, Theodoric left behind him an admirably organized state, but it had one conspicuous weakness. The Goths, although Christians, were unorthodox according to the standard of the Italian Christians. They had been converted by eastern missionaries, who taught them the Arian heresy earlier prevalent at Constantinople. This doctrine, which derived its name from Arius, a presbyter of Alexandria (d. 336), had been condemned by the Council of Nicæa. The followers of Arius did not have the same conception of Christ’s nature and of the relations of the three members of the Trinity as that sanctioned at Rome. The East Goths were, therefore, not only barbarians,–which might have been forgiven them,–but were guilty, in the eyes of the orthodox Italians, of the unpardonable offense of heresy. Theodoric himself was exceptionally tolerant for his times. His conviction that “we cannot command in matters of religion because no one can be compelled to believe against his will,” showed a spirit alien to the traditions of the Roman Empire and the Roman Church, which represented the orthodox belief.

(Source: “An Introduction to the History of Western Europe” by James Harvery Robinson)

(*) This is quite weird, as the same Alaric and his Goths destroyed and plundered the greatest monuments and cities of Greece during the same era. There must be a reason for this which remains rather unclear. We do not believe that it had to do with some kind of  ‘sensitivity’ from his part or ‘respect to Civilization’.