Around 6,500 years ago, an advanced new culture surfaced in what is today Israel. Spectacular pottery, exquisite tools and enigmatic works of art appeared, seemingly out of nowhere. The culture would flourish for about 600 years during the late Copper Age, then disappear as inexplicably as it arose.

(Photo: Secondary burial vessels with human features, over a meter in height and dating to about 6,500 years ago, found in Peki’in Cave)

Now archaeologists believe they have deduced its origins: migrants from across the Middle East and Eurasia, who were actually warmly welcomed by local farmers.

At least one of these outsider peoples seems to have included blue-eyed, fair-skinned immigrants, according to a paper published Monday in the journal Nature Communications.

These conclusions are based on the analysis of DNA extracted from the bones of these nearly-forgotten people, found in a burial cave uncovered in the mid 1990s in Peki’in, a village in the Western Galilee.

Comparing their DNA to other samples from previous and later periods, and to samples from different regions, showed that the ancient ‘Peki’inese’ were an admixture between local populations and two additional groups: one from Anatolia or northern Mesopotamia, and one from Iran, the Nature paper says.

Eye-color and skin tone aren’t controlled by single genes: they are genetically complex. But it can be said that gene variants associated with blue eye-color in Europeans, and light skin, appeared among these ancient immigrants, suggesting that baby blues were possibly even common among them.

In other words, the genome analysis doesn’t prove that blue-eyed migrants flocked in, but it strongly indicates as much.

If so, the newcomers would have struck an unusual figure among the Levantine farmers of the Copper Age (a period also known as the Chalcolithic), as blue eyes and light skin in the Middle East were even more uncommon back then than they are today.

Despite their differences, the three groups appear to have mingled peacefully, says Israel Hershkovitz, a physical anthropologist from Tel Aviv University and co-author of the study.

“These small groups of migrants were welcomed, and influenced the local culture to create something new that didn’t exist anywhere else, either here or in the north,” says Hershkovitz.

Buried twice in the Chalcolithic

In 1995, construction workers accidentally cut an opening into a natural cave in Peki’in (also spelled Peqi’in), and called in the archaeologists, who were astounded by what they found inside. 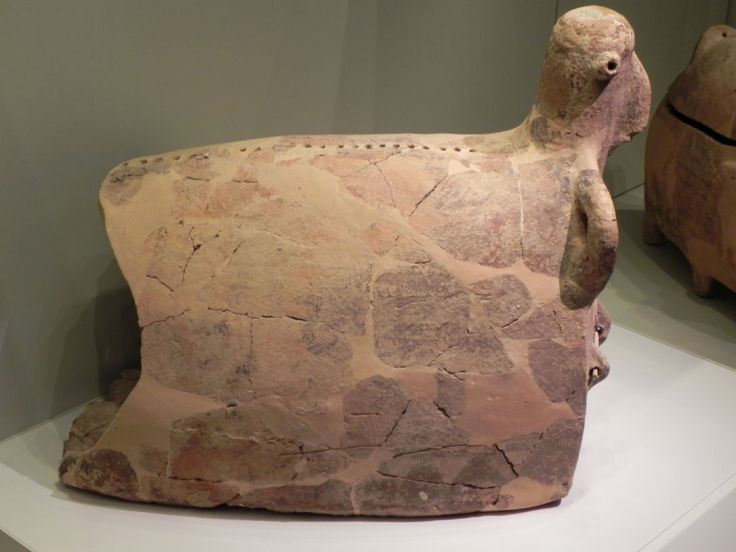 At least 600 people, including men women and children, had been interred in the cave, which was fairly small, just 17 by 8 meters. Their remains lined the floors and walls, some strewn around the cave, others collected in vases or beautiful pottery ossuaries that had been decorated with paint and haunting representations of human faces or animals.

Radiocarbon tests dated the bones to the late Chalcolithic, between 4,500 and 3,900 B.C.E., making this the largest burial from the period ever found in the Levant.

Among the dead were countless artifacts including ritual chalices, jewelry, flint tools and other items.

Looters had disturbed and smashed some of the remains, possibly in search for metal items, of which very few were found by archaeologists. But the cave had become naturally sealed after that and the bones and artifacts were covered in thick layers of limestone that preserved them like a time capsule.

The limestone layers also put a date on the thefts: they too happened thousands of years ago, at the end of the Copper Age.

Like other, smaller sites connected to this culture found across Israel, the Peki’in finds displayed some similarities with other Middle Eastern peoples of the period, but also some unique features.

Chief among these was the use of secondary burial: the body is left to decompose, after which the bones are collected and reinterred in a vase, box or other container.

While the practice has been documented across the world at different times, it is quite rare to find it in the Middle East during the Chalcolithic, says Dina Shalem, an archaeologist for Kinneret College in the Galilee and the Israel Antiquities Authority, who participated in the original dig of the cave as well as the new DNA study.

“You can see the same kind of vessels, the same kind of art in other areas like in Jordanian sites and so on, but secondary burial has only been found in Israeli sites so far,” she tells Haaretz.

The use of ossuaries, rectangular boxes made of pottery or stone to store the bones, is also very unusual, and is only documented in Israel in two very distant and unrelated eras: in the late Chalcolithic – and in Jewish burials of the Second Temple period, more than 4,000 years later.

While some scholars, including Shalem, already suspected that some of the artistic traditions of the Chalcolithic Galileans had come from somewhere to the north of Israel, there was no hard proof.

“Every time we see a cultural change, the question arises: did they make it up themselves; did they copy the idea from somewhere else or did new people come and bring it?” says Hershkovitz. “Until today there were no tools that could answer this question, and that’s where the DNA comes in.”

Marks of love, not war

Extracting DNA from ancient bones buried in Middle East was no small accomplishment, as the region’s hot climate tends to destroy the fragile molecule over time, explains David Reich, a geneticist at Harvard medical school and one of the world’s top experts in researching the genetics of ancient people.

In their investigation, scientists were helped by the cool, stable conditions in the sealed Peki’in cave as well as the fortuitous 2015 discovery that the petrous bone (part of the human inner ear) contains up to 100 times more DNA than other bones, says Reich.

Sampling mainly from this ear-bone, the researchers reconstructed the genome of 22 individuals from Peki’in, one of the largest sets of ancient genetic data from the region.

By comparing that data to bits and pieces of Neolithic and Chalcolithic DNA that had been collected previously across the Near East, the researchers concluded that the Peki’in people could trace 57 percent of their ancestry to local Neolithic groups, while 26 percent of their genome matched that of Anatolian Neolithic populations and 17 percent originated in the Iranian Chalcolithic. 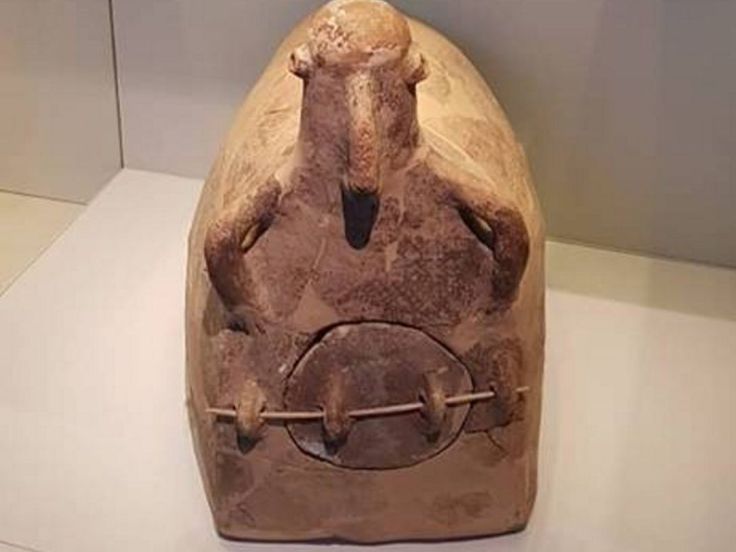 Based on the results of the study, Shalem says it is possible that this three-way admixture may explain the development and use of secondary burial. Ethnographic studies indicate that this custom tends to be performed publicly, during seasonal ceremonies, and often serves to unify a community, she says.

The cave in Peki’in could have served as a cemetery for several villages in the Galilee. The villagers may have gathered there periodically for religious ceremonies that could have helped create a sense of unity between locals and newcomers, the archaeologist says.

But how do we know the admixture was the result of peaceful coexistence rather than war, conquest and enslavement by one group over the others? While the DNA doesn’t answer that question directly, there are various elements that point to a marriage of equals, notes Hila May, a second Tel Aviv University anthropologist involved in the study.

For one thing: The outsiders were a minority but evidently had an outsize impact on the local culture, so it is unlikely they were slaves.

Also, the immigrants interbred with the locals and shared the same burial place, which suggests they were not conquerors or an exploitative foreign elite.

Finally, the anthropologists found no obvious signs of war or violence on the bones themselves. Though the researchers caution that a specific study on the pathologies and causes of death in Peki’in has not been done yet, when a war has taken place, the bodies tend to tell the tale.

The DNA analysis also offers clues to the ultimate fate of this population. Samples from Lebanon and Jordan dated to the early Bronze Age, the period immediately after the late Chalcolithic, show very little contribution from the DNA of the Peki’in people.

In other words, at some point around 3,900 B.C.E., this group of Chalcolithic Galileans went almost completely extinct.

This is consistent with what archaeologists see across the Levant during the transition between the Copper and Bronze Age: large-scale abandonment of settlements, reduced production of symbolic artifacts and sudden cultural changes, including the disappearance of secondary burial (until the Jews would revive it thousands of years later).

“It’s clear that at the end of the Chalcolithic there was some kind of drama happening in our region,” says Hershkovitz. The radical genetic transformations point to the arrival of new populations that replaced the previous culture in the area, he says.

Though they are long gone, the people of Peki’in stand as a testament to a much broader and crucial phenomenon that involved all of humanity at this early stage of civilization.

(Photo: Ossuaries and other artifacts embedded in the flowstone over nearly 6000 years in the sealed Peki’in cave)

During the Neolithic, when agriculture was first developing, human groups tended to be isolated and genetically diverse from each other, the study published in Nature Communications notes. Previous studies have shown that at the time, populations from Anatolia, Iran and the Levant displayed roughly the same level of genetic differentiation that Europeans and East Asians have today.

But by the time the Bronze Age rolls in, we see much less variation, already very close to what we have in the present, when genetic diversity within members of a same group is larger than across different human groups. So for example, notes Hershkovitz, today we find, on average, greater genetic diversity among two Caucasians than between Caucasians and blacks – which is why most scientists consider the concept of human races to be biologically baseless.

This all means that a global process of human admixture started sometime between the Neolithic and the Bronze Age – that is, during the Chalcolithic period – and the data from Peki’in offers us a clear window into those events.

The use of metals, which began in the Copper Age, may have played a major part in starting these transformations, as it forced human groups to travel farther and extend their trade routes to source rare and precious ores, says Reich, the Harvard geneticist.

“This was a period of profound population mixture and movement, and what we see in Peki’in is a microcosm of those movements,” he tells Haaretz. “They might have not survived to contribute much to later generations – but others certainly did.”