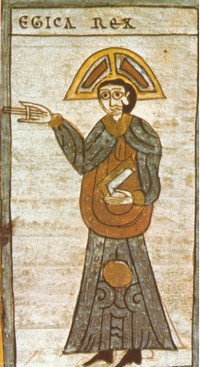 On November 9, 694, C.E., the Seventeenth Council of Toledo convened, in the eponymous capital of Visigoth Spain, and passed a wide-ranging series of restrictions on the Jews of the kingdom. The rules and prohibitions were a continuation of an ongoing effort to lessen the influence of Jews and their religion on society, but ratcheted the pressure on the Jews up a notch by adding a new, political rationale for the measures.

The Visigoth kingdom of Hispania lasted from the fifth century to 712, when an army of Arabs and Berbers defeated King Roderic at the battle of Guadalete.

Currying favor with the church fathers

Initially, these German tribes subscribed to a form of Christianity defined by its “Arian” theology, which distinguishes between Jesus Christ the son of God and the figure of God himself. This is as opposed to belief in the unified nature of the Trinity – the Father, the Son, and the Holy Ghost – as adopted by all mainstream forms of Christianity at the Nicene Council in 325 C.E.

In 589, Visigoth King Reccared embraced the trinitarian Nicene Creed, and declared Arian doctrine to be heresy. From here on, the Visigoth monarchs cooperated with the Church Fathers to strengthen the faith and limit the influence of Jewish beliefs.

One principal source of information about the kingdom is the detailed records kept of the Councils of Toledo, which were synods convened by the king that dealt with matters of both spirit and state. The first was held in 400, and the 18th, final council was held in 702.

The restrictions on Jews had intensified and lessened depending on the hostility of the particular king who convened a particular council. At times, all Jews were commanded to convert; at other times, they were not permitted to hold slaves or to give testimony in civil courts. Intermarriage was also prohibited. These measures were observed and disregarded to different degrees over time and in different locales.

In Egica, the monarch who called the 17th Council of Toledo, the Jews of “Hispania” (as the Visigoth realm in Iberia was called) encountered a king who was determined to finally rid his domain of Jews. He imposed a set of especially severe anti-Jewish decrees.

Egica (c. 610 – c. 702) ruled from 687 until his death. When he opened the 17th Council of Toledo, he began by revealing that he had learned of a conspiracy between the Jews of his kingdom and their brethren across the narrow straits dividing Spain from North Africa, who were then under Muslim control. According to the intelligence that had come into his hands, the Jews of both continents were preparing to make common cause with the Muslim armies that were poised to conquer Iberia.

This Jews’ readiness to enter into such a traitorous alliance demanded harsh measures against them. Thus the 17th Council of Toledo declared that all Jews, other than those residing in Narbonensis (that part of Hispania to the northeast, in modern-day France), should be made slaves, and given into possession of Christian masters in different parts of the kingdom. Those masters would now be responsible for insuring that they no longer observed any Jewish customs.

Their property was also to be confiscated by the crown. Any Jewish-born children under age seven would be taken from their parents and raised as Christians.

Aside from the records of the Councils of Toledo, which were frequent, historical material on the Visigoth period in Spain is hard to come by. But historians suggest that the measures ordered by Egica were indeed in part implemented, certainly in Toledo, the capital. 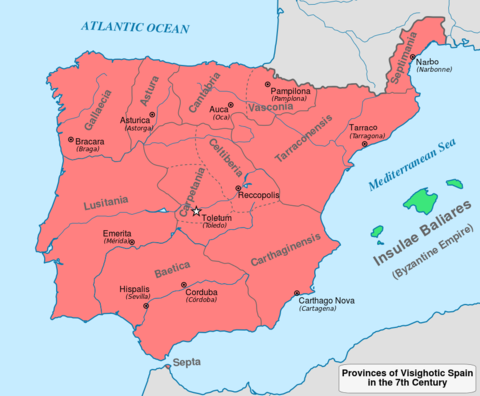 But it was also clear by now that the Visigoth empire was on its last legs, and in fact it was only 18 years later that it collapsed altogether, with its lands conquered by Muslim invaders.