Here we present and analyze an excerpt from the ‘Lithics’ of Orpheus (Orphei Lithica).

In English: «But mortals do not have the desire for prudence; and they despise you, oh respected knowledge (1). When they hear from afar about Virtue, the mother of Heroes, they run away; they do the same when they hear about labour/hard work, our assistant; about labour, our assistant in life; and they feel great horror. Their houses do not have happiness as their Master/Lord, neither even one of them knows how to respect the, ever living, gods. They have persecuted good wisdom (2) from their cities and their fields, thus committing hubris against Eriounios (3). And so the work done by the former demi-gods was lost. And now he is annoying/arduous and hated by all; and the peoples will give him the name of magician/magus. And this divine man lies in the dust, suffering a sad death, having lost his head by sword. But them, identical to beasts, uneducated and ignorant, due to shortage of divine (4) spirit, neither with the heavenly/exquisite assistance of Phaesimbrotos (5) did they escape from evilness, neither they know any excellent (6) work that could be possibly admired for long. But they have a black cloud around their brains which prevents them from walking inside the flowery and multi-wreath field of Virtue»

(1) ‘δαημοσύνη‘ does not accurately mean ‘knowledge’. It derives from the word ‘δαίμων-δαήμων’ which translates to ‘the one who knows many deeds perfectly’ or ‘the wise’

(2) ‘εσθλήν σοφίην‘ – the word ‘σοφία‘ means: intelligence, skilfulness, experience in a form of work/art, prudence, the opposite of ignorance, knowledge of sciences, learning, education, philosophy.

(3) ‘Εριούνιος‘ (Eriounios) was a name attributed to Hermes. Literally, it means ‘the one who has much benefited’

(4) ‘δαιμονίοιο νοήματος‘ – here we observe an example of the identification of the words ‘god/divine’ and ‘daemon’ (θεός/θεϊκός – δαίμων/δαιμόνιος). It must be clear to the reader that Wisdom, Knowledge, Education, etc,  go around the words ‘θεός – σοφία – δαίμων’, that are very often used alternatively to declare the same things, and with the same ‘hidden’ meanings.

(5) ‘Φαεσίμβροτος‘ (Phaesimbrotos) – the word usually identifies with ‘the Sun’. Literally though, it means ‘he who brings light to the mortals’. And we know very well that the ‘Light’ is not only meant physically, but spiritually, too.

(6) ‘θέακελον έργον‘ – the literal meaning of the word ‘θεάκελος‘ appears to be ‘identical to god, same as god’. So, the meaning here changes from ‘excellent work’ to ‘deeds/works that would resemble those of god’.

The importance of Motive

When mortals do not have a desire for prudence, they despise knowledge (Real Knowledge is about learning the Truth of things and not just a collection of stilted and showy information). And as we have shown above, they simultaneously despise wisdom and the Divine. ‘Having a desire’ indicates the value of motive here. If his motive is not towards Good, then Man can only despise whatever is truly Good and lead his steps on the path of Evilness. Theologically speaking, the factor ‘motive’ is considered very crucial and decisive before the Divine (God). It is believed that God judges Men firstly and mainly of their motives and secondarily for their actions. The same belief is apparent in ancient Greek Philosophical texts.

Those people cannot even stand to hear about Virtue. Of course, they are unwilling and incapable of any virtuous deeds, too. Orpheus identifies Virtue as ‘the mother of Heroes’. And who were the Heroes? People that stood above the multitude for their Good and Great deeds. People who taught higher ideals (and/or offered great services) to the many, among those Freedom. Anyone can realize now how important is Virtue in Man’s life. When Man stands against Virtue, then he can only expect the worse for him and the Society he lives in. Men are unable to perform great deeds or act heroically when Virtue is absent from their Societies. But higher ideals and great deeds make Man differ from animals. Hence, if Virtue fades, beastliness arises.

The rejection of ‘Easy living’ – The Passion of Pleasure

Orpheus continues describing this archetype of Man by stating that the people of this kind also can’t stand even hear about labour/hard work. Actually, they are horrified in the idea of it! But Orpheus identifies labour as an ‘assistant‘ in the life of  Man. Hence, it is clear that he dissaproves of laziness and the orientation of ‘easy living‘. Labour is indirectly sanctified here, as it is obviously connected to Virtue, Goodness, Wisdom and, hence, the Divine. And then, he immediately becomes clear about all these; no home can ever find happiness in the absence of the Divine. Because ‘όλβος‘, which means ‘happiness’ but ‘wealth/abundance’, too, indeed emanates, is determined, from the Divine. ‘Easy living’ is actually the life of bodily comforts, i.e. a life surrendered to ‘Ηδονή‘ (Pleasure), one of the core Passions that destroy Man’s soul and life.

The timeless persecution of the Holy & Wise

And he continues by saying that those bad people persecute ‘εσθλήν σοφίην‘ from everywhere! Obviously, this includes persecution of all Men of Virtue and Wisdom. He accuses the persecutors of hubris against ‘Εριούνιος’ (*).We believe this is an epithet attributed to the True/Actual Being here in this text and not really to Hermes in particular. There is now a historical statement which refers to a former -golden- age, that of the ‘demi-gods’, who established Societies based on Virtue, Labour, Wisdom, Piety, Prudence. And he mourns that all of this collapsed due to the stance of the morally degenerated majority of people. He concludes this bit by telling us that the person who will stand and teach the ‘appropriate’, will not only be hated by all, but he will be defamed, too. In such a way that they will reverse the realities and meanings, i.e. Good for Evil and Evil for Good. And thus the virtuous, wise and pious man will be called…a magician!!! The multitude will be in such a degenerate condition that it will decide to kill the holy man; execute him by sword; behead him. (This vividly reminds us of the Martyrdom of countless of Christians)

Logic, Education and Piety vs Atheism and Pride

Orpheus equates Men to beasts when they are ‘uneducated and ignorant‘ and, even more interestingly, when they lack ‘divine spirit‘. We instantly conclude that Education and Piety -with all this includes- are considered the very bases of Orpheus’ ‘ideal society’. When people are found in such a beastly condition, not only they cannot really produce something useful and timeless, but they ‘cannot’ even be helped by the Divine (‘Φαεσίμβροτος‘ – Phaesimbrotos (*) here). What Orpheus really tells us here is that there is somehow a ‘borderline’ that, when crossed by humans, help from above is ‘not allowed’ (Homer had the same view on the matter). It is rather obvious, when combining all the information from this text, that this has to do with the Will of Man, which choses -because of enormous Pride– a path ‘against the Will of the Divine‘, that is, the path of Wisdom, Prudence, and the like that we have already described here and in other previous relative articles in our ‘Philosophy‘ section. People of this pitiful condition have ‘a black cloud around their brains’, he says. And this prevents them from walking ‘in the field/region of Virtue and reap its fruits’. The same expression is often used by Homer, ‘black/dark brains’, in order to describe the same thing. What we are told here is that if Man is deprived of the Divine tool of Logic -the optimum functioning of Man’s brain- in combination with laziness towards bodily, mental and spiritual labour, then Man’s reasoning/acting becomes a complete confusion. And, of course, all these happen when Man is additionally found in an ‘atheistic‘ condition -or ‘against the Divine‘ condition.

Other conclusions and important notes

Finalizing our short analysis, what we have here is another -very- ancient Greek text referring to the same values and ideals of Piety, Wisdom, Prudence, etc. It is important, first, to note that Orpheus lived long before Homer. We notice a complete ‘coincidence’ of opinions/views of thinkers from the times of Orpheus and Homer until the classical era. The relative difference is that the older writers teach the same things with the use of Mythology -indeed allegorically- while the latter ones very rarely refer to Mythology and allegory and instead prefer to analyze with the help of their contemporary images.

Another interesting thing is the apparent ‘continuity‘ of the core of Greek Philosophical thinking since Mythological times. We have already presented in previous articles what is True Philosophy -according to the ancient Greeks themselves- and why it should be distinguished from ‘Σοφιστεία‘ (Sophistry) or ‘Διανόηση‘ (Thought). An excellent Thinker is not necessarily a Philosopher, while a Sophist violates basic rules of Philosophy.

Concluding, we exhort our reader to perform a comparison of all the above with the condition of Man and his Societies in our times. We are convinced that Humanity is not very far apart from the ‘beastly condition’ described above. Is there enough time to change things? Is there any Will to do so? It remains to be seen. 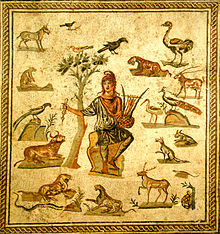 (*) ‘Εριούνιος‘ and ‘Φαεσίμβροτος‘ constitute two idioms of the True/Actual Being. It is necessary to state here that Orpheus was considered one of the first -if not the first– Theologians of ancient Greeks.

One thought on “Orphic theological and social views”