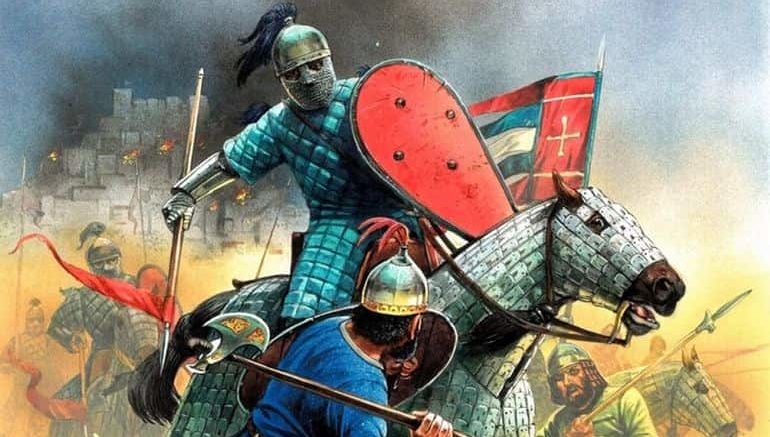 The Roman fortress-town of Dara or Justiniana Nova had been in Persian hands since the early 570s. It lies 18 km west of Nusaybin/Nisibis on the Turkish side of the today’s Turkish-Syrian border. 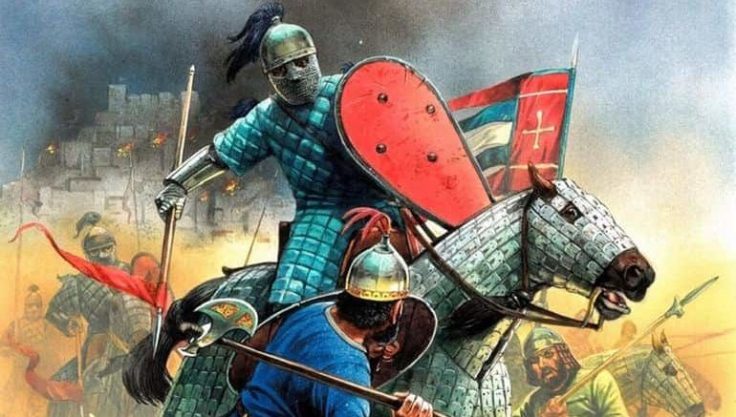 The battle is described by John Haldon as an illustration of what a well-led Byzantine army could do, against the odds, for they beat a larger Persian army in (he proposes) around half an hour. Agathias states that the role of Byzantine dismounted cavalry was vital; indeed the army on this occasion seems to have involved no infantry.

The armies that clashed at Solachon, west of Dara, seem both to have consisted wholly of cavalry. The smaller Byzantine army of Philippicus (brother in law of the emperor) – a few of his troops were Hun ‘mercenaries’ (salaried professionals) – comprised units of mixed lancers and horse-archers, together with a force of allied Arab troops under their tribal chieftains. The larger Persian army under Kardarigan was similarly composed of units of lancers and horsearchers. Both sides may also have included heavily armoured cataphract units (the Persians had long used horse-armour, and Byzantine horse armour is mentioned in Maurice’s Strategikon, dating to shortly after this time).

(*) Presumably a rendering of the Gothic or Lombard name Alifreda

Rejecting proposals for peace negotiations, Philippicus advanced south from Amida as far as Bibas (Tel Besh) on the Arzamon (Zergan) River. Having crossed the river, the imperial army encamped in the plain below Mardin (Gk Mardes), on the Turkish side of today’s Syrian-Turkish border.

The Persian army under Kardarigan—a title that translates as ‘the Black Falcon’—came forward from Dara. With them they had a substantial camel-train bearing water-skins, as there was little or no water between the major watercourses. Arab irregulars serving on the Byzantine side captured some Persian scouts. So Philippicus knew of Kardarigan’s approach.

Hoping to surprise his Christian enemies at rest on the Sabbath, Kardarigan came forward on a Sunday. He very unwisely ordered his troops to dump their water-bags before combat began, expecting that this would encourage them to fight well, knowing that plentiful water lay ahead in the Arzamon River, 15 km behind the Byzantine line.

The Persians found the Byzantines already formed up on rising ground on the plain of Solachon, looking down a slight incline up which the Persians would have to advance. Philippicus’s left flank was well covered by the broken and hilly ground at the foot of a mountain.

The Byzantines were deployed in three large divisions. Heraclius senior, father of the future emperor of the same name, commanded the central division. As Haldon maps it, there was a small unit of Huns under Apsich placed forward, in front of the Byzantine left wing; when the battle opened, Apsich’s men moved off to become the extreme left wing. Philippicus himself was stationed at the rear in charge of a small reserve; the inclined ground meant that he could see over the main line and thus observe the course of the battle. (There was no second line as such, as there would be in later centuries.)

The Persians too formed into three large divisions, with Kardarigan commanding the central division. He ordered a general advance and the Persians pushed ahead straight toward the Byzantine line, firing arrows as they rode. The Byzantines returned the arrow-barrage and made a counter-charge that brought both armies to a halt – except on the Byzantine right. There the heavy cavalry in Vitalius’s division succeeded in smashing into the Persian left division and broke its formation. The Persian left was pushed back and around behind the Persian central division.

Seeing some of Vitalius’s men begin to disengage towards the Persian baggage-train, seeking plunder, Philippicus sent a herald to call them back under threat of punishment.

Meanwhile, in the centre, the Persians were able to rally, their former left becoming part of an augmented central division. They began to force back Heraclius’s central division. To prevent his centre collapsing, Philippicus now ordered Heraclius to dismount his men. The central division formed a wall of shields with spears projected forward, hedgehog-like. This was followed by an order to fire at the Persians’ horses, a tactic that turned the tide of battle in the favour of the Byzantines.

With the Persian centre now halted and in trouble, the Byzantine left under Elifreda was able to mount a successful counter-charge and pushed back the Persian right under Mebod. Soon the Persian right broke up, and, when the now rallied Byzantine right came back into the battle, a general rout ensued.

The surviving Persians all fled towards Dara, except for a small remnant of about 1,500 men under Kardarigan; they fell back to a nearby ridge or hillock and resisted fiercely. After three or four days of harassment, the Byzantines—who did not realise the Persian commander in chief was in charge of the survivors on the ridge—simply left them to die of thirst. In the event, Kardarigan was able to escape alive but with only a few hundred companions.

During Summer, Philippicus resumed campaigning in Arzanene (the region of Armenia that adjoins Lake Van on the west) and besieged Chlomaron (Arzan, modern Erzerum).