The oral history of the Heiltsuk Nation, an Aboriginal group based on the Central Coast of British Columbia, tells of a coastal strip of land that did not freeze during the ice age, making it a place of refuge for early inhabitants of the territory. As Roshini Nair reports for the CBC, a recent archaeological discovery attests to an ancient human presence in the area associated with the tradition. While digging on British Columbia’s Triquet Island, archaeologists unearthed a settlement that dates to the period of the last ice age. 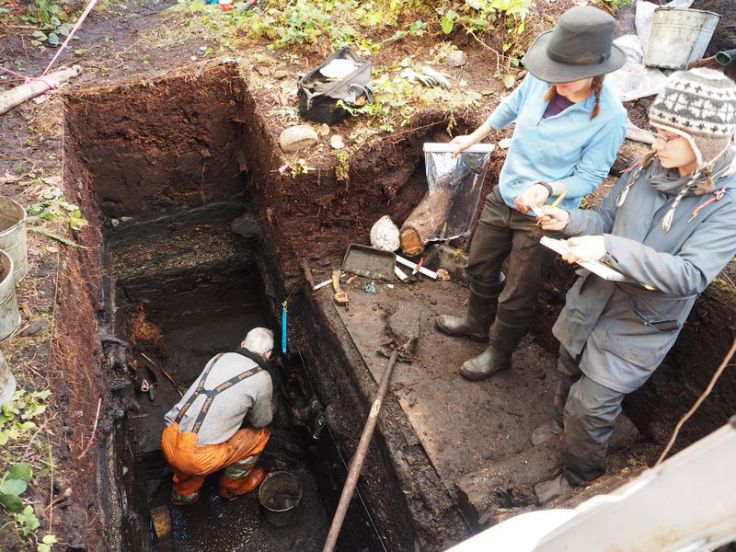 The archaeological team, supported by the Hakai Institute, sifted through meters of soil and peat before hitting upon the charred remains of an ancient hearth. Researchers painstakingly peeled away charcoal flakes, which were then carbon dated. In November, tests revealed that the hearth was some 14,000 years old, indicating that the area in which it was found is one of the oldest human settlements ever discovered in North America. Or as Randy Shore of the Vancouver Sun contextualizes, the village is “three times as old as the Great Pyramid at Giza.”

Alisha Gauvreau, a PhD student at the University of Victoria and a researcher with the Hakai Institute, presented the team’s findings at the annual meeting of the Society for American Archeology this week. She tells Shore that archaeologists also found a number of artifacts in the area: fish hooks, a hand drill for igniting fires, a wooden device for launching projectiles and a cache of stone tools near the hearth.

“It appears we had people sitting in one area making stone tools beside evidence of a fire pit,” Gauvreau says. “The material that we have recovered … has really helped us weave a narrative for the occupation of this site.”

These findings may have significant implications for our understanding of ancient human migration patterns. As Jason Daley reports for Smithsonian.com, the traditional story of human arrival to the Americas posits that some 13,000 years ago, stone-age people moved across a land bridge that connected modern-day Siberia to Alaska. But recent studies suggest that route did not contain enough resources for the earliest migrants to successfully make the crossing. Instead, some researchers say, humans entered North America along the coast.

In a radio interview with the CBC, Gauvreau says that the ancient settlement on Triquet Island “really adds additional evidence” to this theory. “[A]rchaeologists had long thought that … the coast would been completely uninhabitable and impassible when that is very clearly not the case,” she explains.

The discovery is also important to the Heiltsuk Nation, lending credence to oral traditions that place their ancestors in the region during the days of the ice age. “[I]t reaffirms a lot of the history that our people have been talking about for thousands of years,” William Housty, a member of Heiltsuk Nation, tells Nair. He added that the validation by “Western science and archeology” can help the Heiltsuk people as they negotiate with the Canadian government over title rights to their traditional territory.

An ancient village older than the pyramids has been unearthed by a University of Victoria student, and a B.C. First Nation says it backs up tribe stories passed down for generations.

Alisha Gauvreau, an anthropology PhD student at UVic, has been excavating a rocky spit on Triquet Island, some 500 kilometres northwest of Victoria.

Scientists say the artifacts exhumed on the remote island are painting a picture of how our civilization began.

“I remember when we get the dates back and we just kind of sat there going, holy moly, this is old,” said Gauvreau.“What this is doing is just changing our idea of the way in which North America was first peopled.”

What the team found is incredible: Tools for lighting fires, fish hooks and spears, all dating back 14,000 years.

The discovery has led experts to believe a large human migration may have occurred on B.C.’s unfrozen coastline.

What’s more remarkable, according to one B.C. First Nation, is that the scientific discovery appears to corroborate the tribe’s oral history.

“It’s very special to not only me, but our entire tribe,” said Heiltsuk Nation’s William Housty.

Housty said Heiltsuk First Nation elders have passed down stories of ancient coastal villages for ages, and those cultural stories are now cemented in fact.

“To think about how these stories survived all of that, only to be supported by this archeological evidence is just amazing,” he said.

The B.C. village is the oldest to be discovered in North America, but crews’ work isn’t over yet.

Scientists will dig on other remote B.C. islands to keep tracking the ancient footprint of man as far as it goes.

One thought on “14,000-year-old village unearthed in Canada”