Here we present selected parts of the published paper “Were Greek temples oriented towards aurorae?“, by Ioannis Liritzis & Helen Vassiliou.

“The orientation of buildings in the ancient world has been attributed to celestial bodies and sunrise at one of the four solar stands (two equinoxes and two solstices) by renowned scholars from the 19th to the early 20th century (Penrose 1892, Nissen 1906–10, Dinsmoor 1939). More recent researchers have continued this work (Shaw 1977, Henriksson and Blomberg 1996, Papathanassiou and Hoskin 1996, Aveni and Ammerman 2001, Liritzis and Vassiliou 2002, 2003). Although astronomical targets may have been only one among several factors that determined the orientation of such ancient buildings, arguments drawn from ancient literature support contemporary research that points to intentional orientation towards a celestial phenomenon.

Here we examine the possibility of the correlation between the orientation of two important ancient Greek temples dedicated to the god Apollo, and the aurora borealis. Both buildings have a north-south orientation, a rare alignment of temples in general and specifically of Apollo in classical Greece, where most of them have broadly an east-west orientation.

Only the two temples dealt with in this work have a north-south orientation, followed by Thera and Metaponte, the others have an eastern (E-NE and E-SE) alignment. The N-S orientation is exceptional, although the Mother Goddess Temple at Samothrake (c. 300 BC), also has a northerly orientation (348°).

Here we provide evidence for the association between the temples’ northern orientation and aurorae based on: Apollo’s attributes representing light and his annual return from the northern lands of the “hyperboreans”; historical accounts; geomagnetic pole position derived from archaeomagnetic work, that aurorae could have been seen in Greece; and correlation of low-latitude occurrence of aurorae during spring with Ursa Major.

The temple of Epicurean Apollo (built c. 450-420 BC) is situated at an altitude of 1131 m on a narrow terrace of Mt Kotilion in the small state of Phigaleia at Bassae (Arcadia, western Peloponnese). It is a Doric, peripteral, hexastyle temple, shown in the figure below; most of the columns and the architrave are still in place because of the inaccessibility of the temple (lost until AD 1765). It is the first nearly complete temple still surviving and combines, for the first time, the three architectural styles Doric, Ionian and Corinthian. Its principal facade faces north, but there is also an eastern door (to admit the sunrise at right angles to the axis). The ancient traveller Pausanias (second century AD) visited the temple and admired it, and he reports that it was built as a thanksgiving to Apollo for deliverance from a plague in 430 BC. 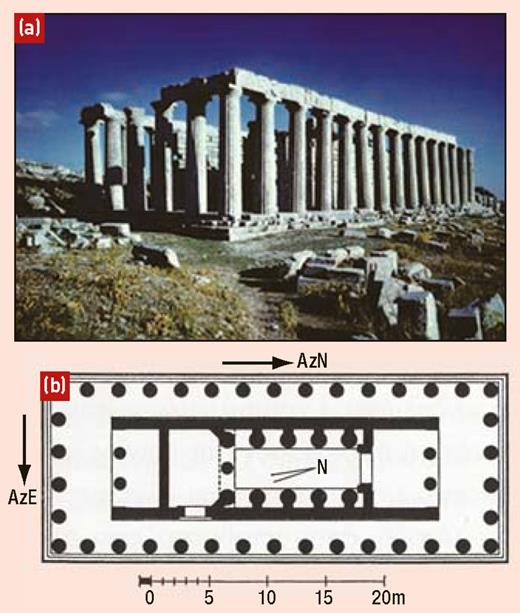 The northern orientation of the temple (table 2) may be connected to Ursa Major, which was known by the ancient Greeks as Helike or Helice, but may also be connected with the aurora borealis (Liritzis and Vassiliou 2003). The northern orientation may be connected to the epithet “hyperborean” given to Apollo for his shift, every winter, to northern (hyperborean) lands and his return to Delphi during the spring. This aspect could be strengthened by the scene on sculptured metopes in the front porch of the building, where he is greeted by Zeus, the local nymphs and Arkas (the hero of Arcadia), implying Apollo’s return from the land of Hyperboreans (Decharme 1884, Stewart 1990).

The occurrence of the northern lights coinciding with the cessation of the plague of 430 BC may have been taken as a sign of Apollo’s deliverance from this plague, probably leading local people to orient the temple towards these lights in thanksgiving. Supportive contextual evidence for aurorae given in some ancient Greek literature (Liritzis and Vassiliou 2002, Stothers 1979a, 1979b) is coupled with supportive contemporary research on aurorae and archaeomagnetic data (Keimatsu 1968, Liritzis 1988, 1990, Liritzis and Petropoulos 1987), all of which make it clear that the aurorae could be seen at these latitudes.

The Temple of Apollo Thermios, built c. 630–610 BC (figure below), situated on the Greek mainland and surrounded by mountains, is one of the earliest peripteral buildings of Doric style, with axial colonnade, five columns at the ends and 15 columns at the sides. It is located at the northern end of the Sanctuary of Apollo Thermios, built over the remains of an apsidal building — the Megaron B. The entrance is from the south. The dating and functioning of the megaron remains uncertain, but it is considered to be of the geometric period (c. 1000 BC to 680 BC). A row of columns down the centre divided the building lengthwise; some column-drums remain in place. The walls may have been made of sun-dried brick. The entablature was of decorated wood; the frieze and acroteria of painted terracotta (Dinsmoor 1975, Lawrence 1983, Kokkorou-Alevra 1991, Mastrapas 1994, Papapostolou 1994).

At both temples, orientation measurements were made with a magnetic compass/clinometer (Meridian, MG-3101). The latitude and elevation were measured by a portable GPS (Garmin GPS III). The magnetic declination correction was determined from maps of the Military Geographical Service (Athens) for 2000 and the World Magnetic Model from the British Geological Survey, NERC (kindly provided by D Barraclough).

The astronomical declination of a horizon point and the corresponding day of the year of sunrise, where appropriate, were calculated using specially developed software (STARDEC and SUNDAY, based upon formulas from Hawkins and Rosenthal 1967, Thom 1967, Ruggles 1999 285, formulas A2.1, A5.1). Stellar attributions are based on the Smithsonian Institution’s star catalogue data from 10 000 BC (see Liritzis and Vassiliou 2002), identified using in-house programs.

Early accounts of phenomena that may be identified as auroral displays (aurorae are electrical discharge phenomena in low-density air) have been abstracted from reports of unusual celestial events in the classical literature. Aurorae were seen as precursors of terrestrial natural events and social incidents.

The ancient prodigies of “sky fire” and “night suns” (and, more uncertainly, of “blood rain” and “milk rain”) appear to be phenomena closely allied to each other, since they show virtually the same cyclical variation during the well-documented time interval 291-23 BC (Pliny the Elder in de Mairan 1733, Stothers 1979a,b).

Contextual arguments that support the contention that a given astronomical alignment of at least some Greek temples was in fact intentional, must be brought to bear. Indeed, an extensive catalogue of ancient aurorae, as well as quotations on temple orientation, is reported. Moreover, mathematical methods of analysing fragmentary time series of observations of aurorae and sunspot numbers have been used, at least since the fifth century BC, in various parts of the world with particular reference to Mediterranean and classical Greek literature.

Ancient reports for aurorae in Greece (e.g. in 479 BC Athens, 466 BC Athens, 372 BC all Greece, 348 BC all Greece, 343 BC near Corinth), include the following: Aristotle Meteorologika 371b–378a; Seneca Quaestiones Naturales Book I; Anaxagoras (fifth century BC) fragmentum 74 in Plutarch’s Moralia, Symposium VIII 3, 3 722; Pliny the Elder in AD 77 in Livy’s great annalistic history of Rome written between 27 BC and AD 17; while the word selas (meaning aurorae) is found in Homer’s Odyssey, in assimilation contexts.

Modern reviews on ancient auroral occurrences (since the sixth century BC) from classical literature include those by Schove (1951, 1955), Stothers (1979a, b), and seventh century BC in China (Willis and Stephenson 2000, Silvermann 1998, NASA website).

Nevertheless, perceptions of the sky are culture-specific, and the present mode of explanation is pertinent to the Greek tradition. It is doubtlessly true that aurorae were caused in the past, as now, by the interaction of the solar wind with the Earth’s upper atmosphere and magnetosphere. So the ancient auroral cycle can be directly equated with the ancient solar cycle, apart from a possible difference of phase. Although at northern geomagnetic latitudes the aurorae are frequent (several appearances per year), in low geomagnetic latitudes such as the northern Mediterranean rim regions, only an extremely rare aurora every few decades would have been easily seen, mainly when the geomagnetic pole inclined towards these regions. The geomagnetic poles move around geographical poles and the auroral bright oval formed round them moves accordingly. Great geomagnetic storms may cause aurorae in low latitudes, say as low as 35–39°N. In contemporary Greece aurorae have been reported by Greek and foreign scholars from the observatories in Athens and Corfu during the 1860s and the 1870s and in 1938 (Corfu), (Zoubos 1938).

If the ancient orientation of these two temples was towards the northern lights, this must coincide approximately with the northern geomagnetic pole. The coincidence cannot be exact, because they are non-dipole sources, the local magnetic field must be taken into account, and these lights appear along a zone not as a bright point.

It is a happy accident of history that ancient civilization in Europe developed around low geomagnetic latitudes. For, if modern aurorae are admitted as a provisional guide to ancient ones, a small (but not negligible) number of aurorae are expected to have been easily visible in any decade down through the centuries at the low latitudes of the Mediterranean countries. In fact, at more southerly geomagnetic latitudes, only an extremely rare aurora every few decades would have been easily noticeable.

Naturally, only people at geographical latitudes within and at the boundaries of the auroral oval around the shifted geomagnetic pole would have seen these events. Thus, a comparable sky status could be shown between the fifth century BC observation of aurorae in Greece and the account of AD 937 at Loyang China (34° 46′N, 112° 26′E) (Keimatsu 1968).

For Epicurean Apollo the orientation to the east drawn from an additional eastern entrance to the temple, with Az = 98° 36′, corresponds to the rising Sun in early to mid-March or early October. On the other hand the northern direction relates to α, β UMa. For Thermios Apollo the northern direction points to ν UMa. No side doors are found. Therefore it seems that the period of auroral occurrence at least in Phigaleia, occurs according to the seasonal position of the Sun (early October and mid-March).

Although other northern lights or zodiacal light may be suggested, the auroral incidence is most probable as only spectacular events associated with great magnetic storms could make a strong impression and attract the sort of notice that might lead to temple construction. Moreover, as mentioned above, several points lead to this inference, such as the epoch, association with stars, and the type of mid-latitude aurorae, as well as the inclination of the geomagnetic pole.

The northern orientation may be connected to the hyperborean epithet given to Apollo. The occurrence of these northern lights during a period of deliverance from the reported plague during 450–420 BC in Phigaleia might have lead local people to orient the temple towards these lights, as thanksgiving to their hyperborean god Apollo. It is worth mentioning that in both sites no topographical reasons forced the N-S orientation.

No reports refer to a cause of construction of the Thermios Apollo temple. However, taking into account the characteristic of fire in the epithet Thermios, it is possible to correlate with due caution the cult of Apollo at this place with the appearance of “fires” in the sky, and attribute to hyperborean Apollo is reasonable to relate for the same rationale to auroral lights.

The notion that the northern orientation of two temples of Apollo in Greece — Epicurean and Thermios — is related to aurorae borealis has a sound basis. Textual evidence, at least for Epicurean Apollo, refers to deliverance from a plague during the fifth century BC and local people built the temple as a thanksgiving to god Apollo. In addition the epithet “hyperborean” given to Apollo provides further support for the northerly orientation. The other Temple of Thermios Apollo (thermios meaning light, fire), of an earlier date, lacks textual evidence but may as well be related with the hyperborean Apollo, god of light and enlightenment. Aurorae are connected to omens during medieval time, but these impressive yet rare occurrences, as well as the god’s representation of light, are strong elements in the northern orientation of these two temples. Furthermore, archaeomagnetic directional measurements for the two construction dates support an inclined geomagnetic pole towards Mediterranean, and in turn an auroral occurrence.