The remains of a vast Bronze Age town dating to 3600 years ago has been discovered in Gaza, and has now been shown to be a rich trading hub. The prosperity of its Canaanite inhabitants is evident in discoveries of elaborate gold jewelry, vast amounts of imported pottery and an unprecedented number of scarabs.

Taken together, the findings indicate more 500 years of undisrupted trade between the seaside Canaanite town and other Mediterranean peoples, notably the ancient Cypriots. Among the clay sherds discovered were over 200 of white slip I type of pottery, a type of ware rarely found outside of Cyprus.

Tell el-Ajjul, which lies right on the Gazan coast, was first explored by Sir William M. Flanders Petrie from 1930-1934, who mistakenly thought it to be ancient Gaza. His excavations yielded vast amount of imported pottery, jewelry and gold objects, some of which are displayed at British Museum.

“I was aware of the Cypriot imports from Petrie’s excavations, but when I realised the actual amount of Cypriot imports, I came to the conclusion that Tell el-Ajjul was a trading centre with tight connections to Cyprus, sanctioned by the Egyptian overlord,” Prof. Peter Fischer of Gothenburg University and head of the excavation told Haaretz.

From Tell el-Ajjul, Cypriot products, especially pottery, copper and bronze, were distributed throughout the southern Levant, including Transjordan.

Fischer believes that the large amount of luxury items is the consequence of surplus from trade, especially considering that there are no other natural sources which would explain the wealth of Tell el-Ajjul, except for possibly selling products from farming, such as wine and olive oil.

Situated on one of the world’s oldest trading routes, connecting North Africa with the Levant, the Via Maris or King’s Highway has been the object of contention throughout history, and has been the stage of constant battles. A nonexhaustive list includes Gaza’s conquest conquered by the rulers of Egypt, assimilation into Philistia, crossing by the armies of Alexander the Great, a millennium years later by the horses of the Crusaders and long centuries after that, by the brigadiers of Napoleon Bonaparte.

Fischer believes Tell el-Ajjul may have been the main trading center in the region, with a monopoly over commerce with certain major Cypriot trade centers from the end of the Middle Bronze Age and major parts of the Late Bronze Age.

Discoveries of rich imports from the Syria, Egypt, the Jordan Valley and the Mycenaean sphere attest to Tell el- Ajjul’s importance as a a vital trading center during this period, which lasted from around 1650 to after 1300 BCE. 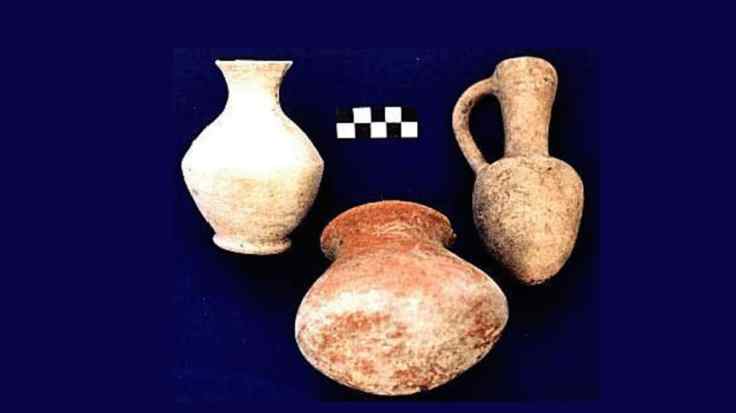 Refuge for the Hyksos?

Who exactly ruled this important trade junction during Middle to Late Bronze Age is a mystery.

During the Middle Bronze age rulers over Tell el- Ajjul may have been sovereign kings or governors, dispatched from the Hyksos capital of Avaris in the Eastern Delta of the Nile. But by the time the Hyksos Dynasty was overturned, around 1500 BCE, Egyptian governors from the 18th and 19th dynasty seem to have taken over the town.

Fischer believes Tell el-Ajjul is identical with Sharuhen, where according to Egyptian sources the Hyksos fled after being expelled from Egypt by Pharaoh Ahmose I.

“Tell el-Ajjul was at the beginning of the Late Bronze Age/New Kingdom under siege, and was eventually conquered by Ahmose, the first pharaoh of the 18th Dynasty. I also believe that Tell el-Ajjul experienced a certain sovereignty under the rule of the Egyptians, because both parts gained from the trade organized from Tell el-Ajjul,” Fischer says. “Most of the more than 1300 scarabs from Tell el-Ajjul were locally produced and represent trading goods which one can find everywhere in the Levant, including Transjordan. However, there are also genuine Egyptian scarabs at Tell el Ajjul.”

Although Tell el-Ajjul may have changed hands, business continued as usual under whoever was in charge. There is evidence of undisrupted trade with Cyprus, the Levant as well as Egypt. It clearly was not in the interest of the rulers to disrupt trade through the town, which continued throughout the Late Bronze Age.

Large amounts of colorful tableware was imported from Cyprus, which together with Mycenae, was the main manufacturer of luxury pottery in the Eastern Aegean at the time.

This may explain the all-but-nonexistence of locally produced tableware at Tell el-Ajjul: the population seemed to preferred to dine with style. They seem to have exchanged Canaanite jars carrying oil, incense and wine for the imported pottery.

As for the age of Tel el-Ajjul, relative dating by layers and styles of pottery, was perfected early in the twentieth century by Petrie. But solid evidence can be found in the large quantities of pumice, a “frothy” rock that is created and ejected during volcanic eruptions, that the Swedish-Palestinian excavations found.

Analysis has shown the pumice at Tel el-Ajjul originated in the catastrophic eruption on Santorini Island (then called Thera). Based on radiocarbon dating of an olive tree from the volcanic layers at Thera itself, the volcano erupted just before 1600 BCE. The pumice at Tell el-Ajjul would have landed there at that time, Fischer says.

Meanwhile, excavation at Tel el-Ajjul stopped in 2011 because of the Egyptian restrictions at Rafah and Israeli restrictions at Erez. Fischer mourns that the entire tell is at risk of total destruction, not because of ISIS-like attacks on history but because of modern construction on and around it. Look at Google Earth, he says – “There are new houses everywhere on the tell. In consequence, I am very pessimistic that Tell el-Ajjul can be saved for future generations. Believe me, I have tried.”