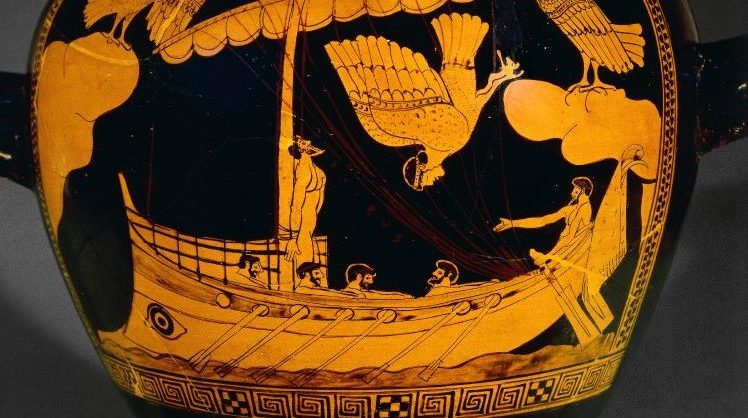 Here we present selected parts of the paper titled “Autagreton“, by Emmanuel Mikrogiannakis, taken from the impressive collective work “Science and Technology in Homeric Epics“, edited by S.A. Paipetis (Springer, 2008). 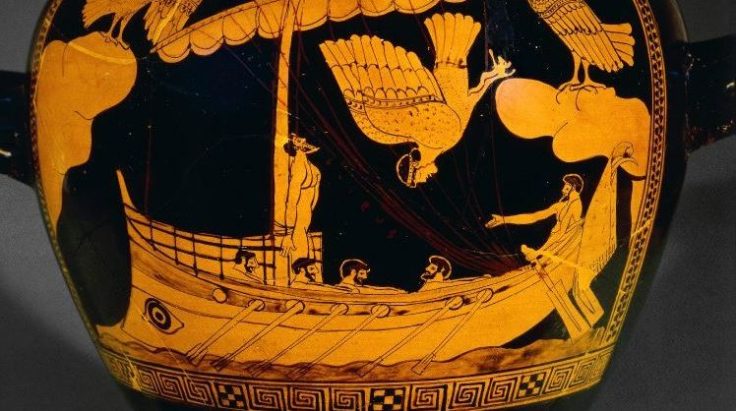 “One example, autagreton, a Homeric word (Od. 16,148, cf. 8.555 ff) finally expresses what is sought for today, what our final purpose is. What is the main goal of modern technology, mainly military (which is the most ambitious)? One vehicle, self-controlling mechanism according to the different situations, capable by itself to perform any mission successfully.

Is it not impressive that such a mechanism is already described in Homer? This mechanism can be called autagreton (already existing in the society of Phaeacia and King Alcinous). Autagreton is a term superior to automaton (self-acting), because the first is subject to the mind and brain of its possessor. Moreover, autagreton shares the soul of its master, especially the νoύς (mind), which is the governor of the soul (according to Plato).

General remark: The technology hinted in Homer (even in mythical clothing) provides us with brand new aspects of technology and offers brilliant terms (such as autagreton) in the beginning of the new millennium (the trimillennium).

The ships of Phaeacia:

1. have outstanding knowledge of the whole earth,
2. need neither steersman, nor steering oar,
3. know what their lords have in mind and implement it,
4. they encounter successfully and handle any obstacles quickly, and
5. they are indefatigable, invisible, unassailable and invulnerable.

Homer is an encyclopaedia, not in alphabetical order. Everything is woven around a catastrophic μήνις (wrath) and a πoλύτρoπoς (much-travelled) man. In a clear way, at an analogous pace we walk alongside portraying all that the Muse αείδει (sings). The correct reading of Homer is fruitful for those who are εγκύμoνες την ψυχήν (pregnant of the mind).

It should not surprise us that Homer’s most complete αναγνώστης (reader) was Alexander the Great. This Homer was his guide, acknowledged by Alexander himself as a συστρατηγός (co-general). The association was so deep that Alexander forgot himself and modelled himself on Achilles. Virgil also showed how strong Homer’s wine is in his Aeneid, the national epic of the Romans. A (displaced) Homeric hero becomes the founding father of the Romans in the work of the Homer-mad Virgil.

This, however, mainly in the sphere of culture. Homer lifts the mind (and tempts νόoν [mind], μένoς [wrath], κύδoς [glory], κάλλoς [beauty]) and excites us. But what does he offer to technology, which is an extension of the human hand and senses? Does he give us any ideas in the area of arms manufacture, of physics, medicine, astronomy? Does he offer anything to computers, the machines thinking alongside man? I shall not insist on marking the greatness of his achievement,which has been underlined many times, that he sees everything in every aspect of the subject under study with clarity and linearity. In the “Homeric Archaeology”, a series of several dozen volumes, there are entries according to category on subjects such as dress, weaponry, fortifications, shipbuilding, etc.

Every science is ennobled and finalised when it is plunged into antiquity, to find its root therein, when it expresses the καινά αρχαίως (as far as the αρχαία καινώς).

There is something noteworthy that has not been noted. We hear that in large research and industrial centres attempts are being made to construct computers that will not need human hand. Perhaps not even speech. These would not have been needed to have been done, according to Homer: έπεσιν και χερσίν [with word and deed] (Il. 1.77). But how? Again a Homeric phrase: βoυλή και νόω [with will and mind] (Od. 11.211, 16.374).What is that which is being sought after today and which shall be the εσόμενoν (futurum), tomorrow?A machine, an “αρκυoστασία” (a trap with nets), which by its very nature but without έπoς (speech), shall conceive and realise not just any thought but that which we wish, that which we choose and want to realise. With one word: τo αιρετόν (that which is chosen).

Is there something in Homer analogous to what is hoped for today? Indeed. Telemachus (Od. 16.148), having returned from the journey to Pylos and Sparta and whilst accompanied by his faithful Eumaeus and Odysseus himself (as yet unrevealed), expresses the opinion:

(If people could have everything their own way, the first thing I should choose would be the return of my father)

All the translations render this crucial αυτάγρετα along with its immediate context, either as if this were the word αιρετά or a wish, as follows: would that everything were in the hands of the mortals. Here, however, we do not have a wish or a choice, but a proposal. A simple thought is expressed. In the Attic dialect, the above would be thus:

The weight falls on the αυτάγρετα (αυτά + αγρέω or αγρεύω). Aγρέω and αγρεύω are verbs of hunting. Hunters capture with a variety of άρκυες (nets). Aυτάγρετα (αυτάγρευτα, αυτόληπτα) are those which are caught, they are captured in some kind of mechanism, without the (physical) involvement of the hunter. Telemachus here foresees (τηλόθεν constantly from afar, I would say) the possibility that such machines could be constructed (presumably by Hephaestus, like his tripods or the κύνες [dogs] of Alcinous which have intelligence, they understand the wish and implement it).

The αυτάγρετoν of Telemachus is our long-term future vision. What do humans wish for? Boυλήν (will) and the ability to realise it. The greatest will is divine. Minor βoυλαί are those of humans. The αυτάγρετoν that Telemachus talks of in the presence of Eumaeus and the as yet unknown stranger (his father) has already been performed and is being put into action. Telemachus does not know it, but Odysseus is already in Ithaca, is in fact right next to him. The αιρετόν (choice) of Telemachus is already a fact. The return has already taken place. How? Aυταγρέτως, I would say.

The ships of the Phaeacians carry out the αυτάγρετoν (8.555–563). These are τιτυσκόμεναι ϕρεσίν ήες, i.e. “intelligent” ships (to use the modern expression). These ships know the νoήματα και ϕρένας (thoughts and minds) of men. In other words? They conform to the spirit of their masters. They act in their interest. There are no κυβερνητήρες (steersmen) or πηδάλια (steering-oars) on these ships. All that is needed is for them to know something very simple. This is asked of the stranger on the island of the Phaeacians, that is, where does he want to go, what is his address. This is enough. The ships have stored knowledge (a type of database, navigator) and they know πόλιας και πίoνας αγρoύς (all the cities and fertile countries). They are in a position to deal with any difficulty, they are invisible, wrapped in clouds. The main thing: there is no concern that these ships might be hit, that they might be destroyed or lost. They cannot be hit. They sail wherever, they carry out missions perfectly and return safe.

Where is our own society, at the dawn of the 21st century (the trimillennium)? Are we at the level of the Ithacans or the Phaeacians? Or perhaps somewhere in between? We aspire to build vehicles and bombs that shall carry out large missions in accordance to our νoήματα και ϕρένας (thoughts and minds) and which shall move safely. All the technological side, their machinery, their ability to adapt and be flexible in response to the obstacles that they shall encounter are vital elements.

The verb τιτύσκoμαι, with reduplication of the present tense, indicates a repeated action. The root tu- (the same as in τεύχω and τυγχάνω) indicates success in every problem arising. And these ships (these vehicles of the Phaeacians) have minds similar to those of humans.

It is thus difficult to clarify whether the ϕρεσί (as τιτυσκόμεναι ϕρεσί) refers to the minds of people or to those of the ships. It appears that humans implant ϕρένας και νόoν (mind and thought) into these ships, just as the gods implant κάλλoς (beauty), κύδoς (glory), μένoς (wrath) and, most of all, ϕρένας και νoυν into humans.

The word αυτάγρετoν (an adjective as a noun) could end up as a term (title) for whatever is thought and aspired to by us but is executed, is captured by a mechanism that is self-controlled. Does it differ from the αυτόματoν? With the αίρεσις, human will, this αίρεσις, the choice of the hunter, does not intervene. In the αυτόματoν, to which the root ma- is subject (μάτηρ, μήτηρ and αυτoμήτωρ, as αυτoπάτωρ) it is indicated that something is done by itself. If the αυτόματoν and αυτάγρετoν had will analogous to man, would this then lead to their rule over humans or at least over their competitors? This is a possibility that cannot be ruled out. From the perspective of humans, we aim not to lose control of the αιρείσθαι the choice (for us to be the choosers). With the αυτάγρετoν the whole technological element is separated from us. We are left with the βoύλησις, the will. We assign the goal to the αυτάγρετoν, which is so accompanied by volition. We are left with what is perhaps most important, but setting goals cannot be done ανεμεσήτως, blame-free.”