Here we present an excerpt from Polybius’ book ‘The Histories‘ (The Loeb Classical Library). Polybius offers us here valuable thoughts on the importance of studying the Roman History and History in general. 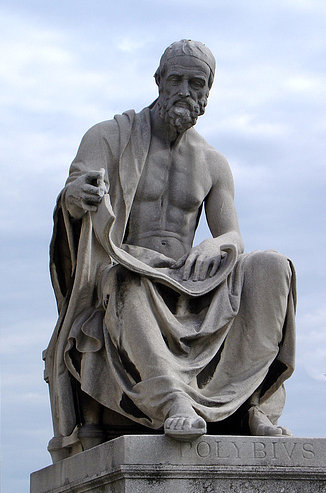 “Had previous chroniclers neglected to speak in praise of History in general, it might perhaps have been necessary for me to recommend everyone to choose for study and welcome such treatises as the present, since men have no more ready corrective of conduct than knowledge of the past. But all historians, one may say without exception, and in no half-hearted manner, but making this the beginning and end of their labour, have impressed on us that the soundest education and training for a life of active politics is the study of History, and that the surest and indeed the only method of learning how to bear bravely the vicissitudes of fortune, is to recall the calamities of others. Evidently therefore no one, and least of all myself, would think it his duty at this day to repeat what has been so well and so often said. For the very element of unexpectedness in the events I have chosen as my theme will be sufficient to challenge and incite everyone, young and old alike, to peruse my systematic history. For who is so worthless or indolent as not to wish to know by what means and under what system of polity the Romans in less than fifty-three years have succeeded in subjecting nearly the whole inhabited world to their sole government a thing unique in history? Or who again is there so passionately devoted to other spectacles or studies as to regard anything as of greater moment than the acquisition of this knowledge?

How striking and grand is the spectacle presented by the period with which I purpose to deal, will be most clearly apparent if we set beside and compare with the Roman dominion the most famous empires of the past, those which have formed the chief theme of historians. Those worthy of being thus set beside it and compared are these. The Persians for a certain period possessed a great rule and dominion, but so often as they ventured to overstep the boundaries of Asia they imperilled not only the security of this empire, but their own existence. The Lacedaemonians, after having for many years disputed the hegemony of Greece, at length attained it but to hold it uncontested for scarce twelve years. The Macedonian rule in Europe extended but from the Adriatic region to the Danube, which would appear a quite insignificant portion of the continent. Subsequently, by overthrowing the Persian empire they became supreme in Asia also. But though their empire was now regarded as the greatest geographically and politically that had ever existed, they left the larger part of the inhabited world as yet outside it. For they never even made a single attempt to dispute possession of Sicily, Sardinia, or Libya, and the most warlike nations of Western Europe were, to speak the simple truth, unknown to them. But the Romans have subjected to their rule not portions, but nearly the whole of the world [and possess an empire which is not only immeasurably greater than any which preceded it, but need not fear rivalry in the future], In the course of this work it will become more clearly intelligible [by what steps this power was acquired], and it will also be seen how many and how great advantages accrue to the student from the systematic treatment of history.”