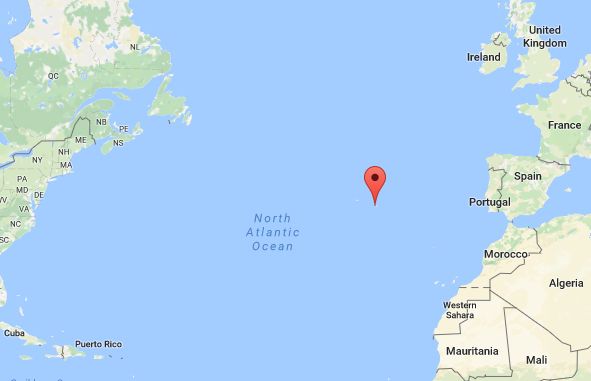 Here we present selected parts from two publications on the Megalithic monuments of the Azores.

Clearly, discussions concerning who first navigated to the Azores are surrounded by much controversy. These discussions must also be undertaken with a willingness to face the evidence, including new evidence that arises and may challenge, or help interpreting, previous historiography. Here we will provide another piece of evidence, which supports the hypothesis that the Azores, or at least Terceira island, were indeed inhabited long before the Portuguese arrived. This piece of evidence was found near the Grota do Medo (Posto Santo), discovered by Rodrigues (2013), a grove, which contains many elements that possess striking similarities with several as-pects from ancient cultures, including man-made rock basins, arrangements of large stones which resemble megalithic constructions, and inscriptions in stones which resemble ancient petroglyphs engraves (Rodrigues, 2015).

A man made bowl (small container excavated in the rock, associated with channels) was found at an outcrop at Terceira Island, Azores, Portugal on a trachytic rock. A solid wall made of silica layers with a total thickness of 3 cm, 6 cm height and 36 cm width was found blocking the front of this bowl. The presence of amorphous silica in soils and altered rocks is very common on volcanic islands, such as the Azores, and can also appear on trachytic rocks (see Rodríguez-Clemente & Tardy, 1986). It was important to assure that the study bowl from where the sample was taken was man-made. The bowl geometric form is not rounded, nor square: the flat front wall is 36 cm width, the distance from the front wall to the back wall is 52 cm and the distance between the lateral sides of the cup is 45 cm. This form could not be explained for any kind of erosion process, which means that it is indeed man made.”

“The author has surveyed a little known area of Terceira Island in the Azores, Portugal, and brought to light a wide-ranging work on structures and rock art with an uncertain chronology, the use of which is not reported in the Azores Islands’ historiography. By studying and classifying the Azorean construction’s and rock art, and making global parallels, the structures and rock art presented showed an unexpected evolving trend—resembling the European megalithic culture, but the large collection of writings about this specific subject, specially about the megalithic art from the Neolithic period, was fairly enigmatic (Brennan, 1983; O’Sullivan, 1988; Garcia et al., 1999).

Due to the uncertain chronology of the Terceira Island’s megalithic constructions, it can be assumed that a megalith is a large stone (as the Greek meaning of the word) that has been used to construct a structure or monument, either alone or together with other stones. But the term is also applied all-inclusively to the architecture of megalithic structures, to the sculptural and other designed features associated to them, and to rock art related to these structures (Johnson, 1908). It is hard, at the moment, to be more precise when using this word for the structures with large stones or for the rock art found in the Terceira Island, due to the absence of dated artifacts.

The construction of megalithic structures took place mainly in the Neolithic (though earlier Mesolithic examples were known) and continued until the Chalcolithic and Bronze Age (Contu, 2000). Assuming that even scientific knowledge is only conjectural, and that the result is a successful speculation, the construction of theoretical ideas is based on empirical data. Assuming that even a Neolithic’s or Bronze Age provenance from the “ruins” found at Terceira Island—Azores could fascinate researchers, at the moment it was a conjecture, because the island inhabitants, in the historical times, could have created similar constructions brought by other kinds of necessities or by the different environment that they found when they arrived to the Azores Islands, and could have used similar materials without an effective connection among the distinct European Neolithic’s places.

It is not completely impossible to establish some associations between a hypothetical ancient human occupation of the Terceira Island and the Western European megalithic culture.

Two structures, discovered at Grota do Medo site, are similar to Passage Tombs, or as in Spanish, tumbas de corredor, one of them located above the other, 10 m high from floor, where the entrance pointing in to the Southeast direction.

The megalithic structure, found at Terceira Island, is alike a passage-grave that runs back into the mound about 4 m. At the end of the corridor it is found a space comparable to a collapsed burial chamber larger circular one, with a 3 m in diameter.

Under the early mentioned megalithic structure was found another one that, once more, resembles another Passage Tomb structure, nevertheless bigger than the first one. The corridor has 7.5 m long with 1.5 m larger.

Stone walls, at left and right sides, with 1.5 m height, made of worked block stones, support big stones (with more than 2 tons) with an inclination of 57˚. At the ceiling, three big stones form a pyramided end shape, which are physically important for the structure’s equilibrium. The corridor ends in a kind of circular burial chamber, with 2.5 m larger and 1.5 m height. The opening orientation of this corridor is to the North.

It is not possible, at the moment, to answer the question: “The communities from the Atlantic façade arrived to the Azores in the Bronze Age ?”, because we have only similarities between megalithic structures amongst the two places and none pottery or artifacts dating from this period, but it must be noted that no archaeological digging or probing was made in the site.

In the Grota do Medo site at Terceira Island; it seems to be present a metaphorical association between water and stone, with some parallels to the Neolithic places of the Ireland. Dozens of bowls where found in this place, with a larger number of them at the capstones of the megalithic constructions or monolithic blocks near the cliffs. Despite the perceived bowls erosion, even now, when it rains, they stay full of water that runs down to the cliffs or to the entrance of the megalithic constructions.

More than twenty stones with carved bowls where found in Grota do Medo site. Most of these bowls are located in improper places for animal or human uses. Usually the bowls are carved on the top of the cliff.

The megalithic structure from Terceira Island, similar to an Irish wedge tomb with a hypothetical Scandinavian boat engrave is, at least, enigmatic. It is known that the majority of the Ireland wedge tombs date to the Early Bronze Age. Based on the evidence from Irish exhumed wedge tombs, recent research has confirmed that they appear quite abruptly, shortly after c. 2500 BC. The most debated cause of the unexpected appearance of wedge tombs at Ireland is that of migration (Schulting et al., 2008).

Four structures at Terceira Island that resemble the Irish Portal Tombs were also found, with an open east-facing entrance which leads into a rectangular or trapezoidal chamber. These chambers are roofed by a process that resembles corbelling. Surrounding the founded chambers was seeing low dry stone walls with orthostats at the extremities.

It is impossible at the moment explain how people built, on the island, a structure similar to a Portal Tomb at the top of the Espigão Hill. The monolith’s arrangement of this structure is not explained with any kind of geological phenomenon.

Grota do Medo cup-marks and cut-marks are present in hundreds of big stones, and sometimes combined like pointing to produce art.

The cup-marks found are simple, roughly hemispherical depressions from about 2 cm to 10 cm of diameter and from 1 cm to 3 cm depth on the surface of many monolithic blocks. Cup-marks often appear in group which can consist in more than one hundred marks on a single stone. Clear similarities were found with those ones created in Stone Circles in Scotland or in other megalithic places in Spain and Portugal, as mentioned above (see Bradley et al., 1995).

In Terceira Island, cup-marks are abundant and found near the large constructions or disperse on a number of disconnected cup-marked stones.

The megalithic builders employed the same method of splitting stones, at different locations all around the world, using cut-marks. This is not unusual, and it is probably the best method to split monolithic blocks, and it is still widely used today.

The shape of the cut-marks at Terceira Island and their volume has similarities with cut-marks from megalithic quarries in France, Ireland, Portugal and Malta.

No historical quarry was registered for Grota do Medo site. Numerous stones with cup-marks that seem to anthropomorphize or animalize the stones were found at Terceira Island. Usually the cut-marks appear to be the eyes of a person or an animal.”

6 thoughts on “Megalithic monuments of the Azores”