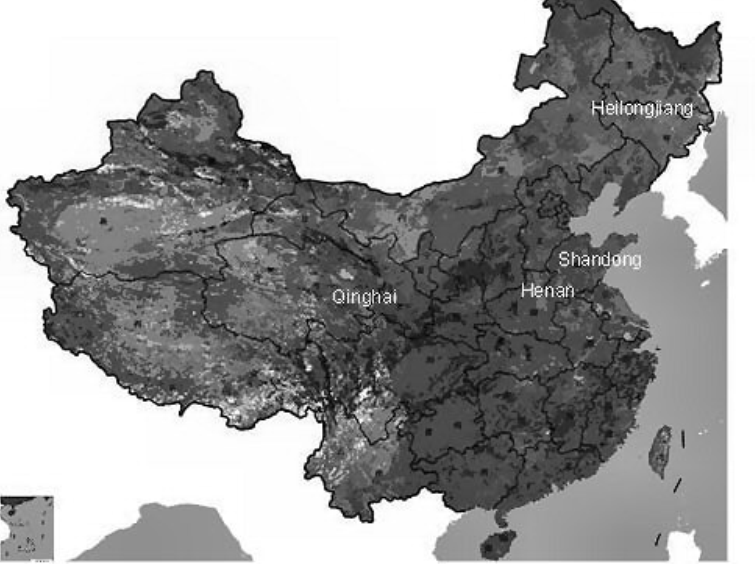 Here we present selected parts of the very interesting paper titled “The archeological evidence of trepanation in early China“, by Han Kangxin and Chen Xingcan.

“In the last few years, the second author has collected archaeological data on cranial perforation in prehistoric China. The majority of the perforated specimens were a result of combative injuries or the acquisition of bone fragments from pre-deceased persons for demonic and magical reasons. Nevertheless, some specimens might be attributable to trepanation (or trephination) for healing purposes (Chen and Fu 1996).

Given the surgical conditions at the time, it is not difficult to imagine the risk involved. It thus caught the attention of the general public and a fair number of records were made (Brothwell and Sandison 1967). The first step in the procedure was to remove the soft tissue at the surgical location, exposing the skull cap. Then a piece of calvarium was removed by scraping, incising or drilling with primitive surgical tools, without damage to the underlying blood-vessels, meninges and brain. 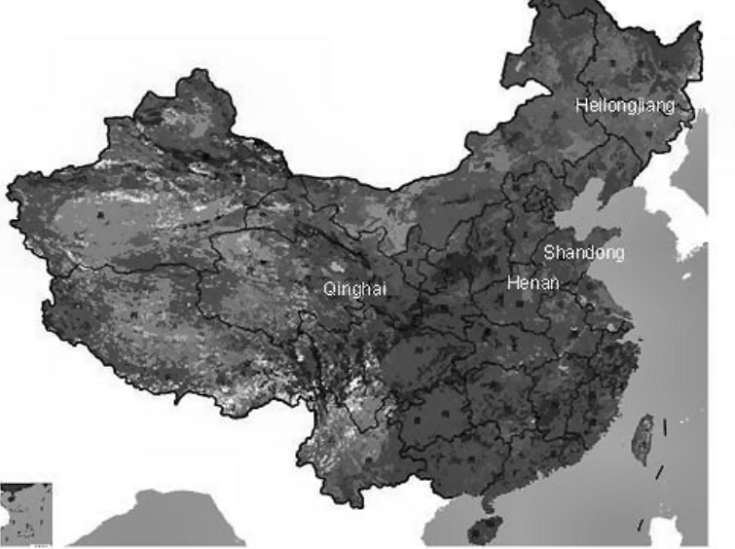 During our physical anthropological study of archaeological assemblages of human remains, the authors of this paper observed several clinically trepanned cranium specimens. They come from Neolithic, Bronze and Iron Ages sites in Shandong, Qinghai, Henan and Heilongjiang.

This is the earliest trepanned specimen so far discovered in prehistoric China. It is an adult male skull belonging to the Dawenkou culture, dated by radiocarbon to about 5000 B.P.

(…) The borders of the openings are relatively smooth and become increasingly thin toward the opening. They are an indication that the patient recovered from the surgery and lived for a long time before he died.

This adult male skull belongs to the Banshan-Machang culture, dated by radiocarbon to about 4000 B.P. 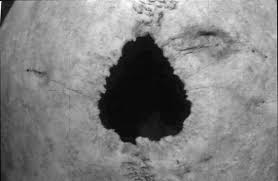 The growth of bone spurs on the borders of the opening and the blurred “halo-shaped” scraping surface indicate that the patient recovered from the surgery. The motive for the trepanation surgery was probably related to the fracture wounds of the individual. 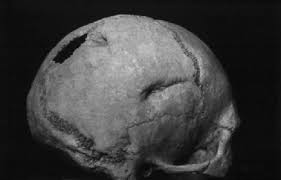 The specimen is a young adult male of the Han dynasty, dated to about 2000 B.P. 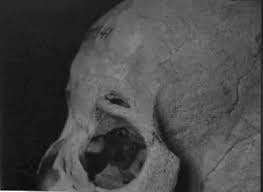 It is likely that the trepanation on the orbit was made to treat infection of the frontal antrum. The characteristics of the cutting surface and the smoothed borders of the trepanation suggest that the specimen survived the surgical operation and lived for a period of time afterwards. 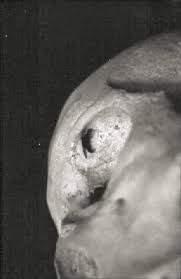 The specimen is a mid-age male specimen of the Kayue culture, radiocarbon dated to about 3000 B.P. 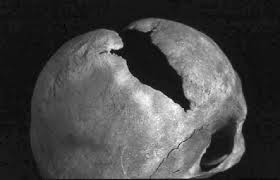 The borders of the opening are relatively smooth. The external plate becomes increasingly thin towards the trepanned opening, giving the plate a gentle slope. This thinning is likely to be a result of using a scraping tool. 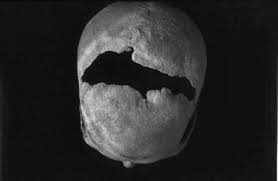 The smoothed surface of the sloping area, the secondary growth and thickening, and the bone spur regrowth on the borders of the opening all suggest that this person survived massive surgery. This is a remarkable successful example of prehistoric trepanation.

The bone spur regrowth at the front of the wound is stronger than that at the rear. It is particularly interesting that the scraping surface is particularly clear and lacks evidence of secondary growth of bone spurs at the rear right of the wound border. We speculate that more than one operation was performed on this individual, and that there was a time lapse between operations.

This specimen is that of a mature adult male dated to the early Iron Age, slightly older than 2000 B.P. 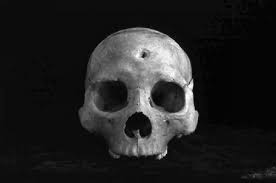 The scraping surface and the edges of the wound are relatively smooth, indicating that the individual survived the operation. 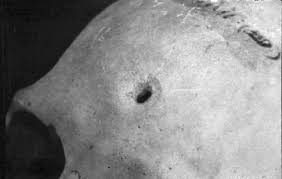 This adult male was a human sacrifice of the Bronze Age, slightly older than 3000 B.P.

The surface of the cutting is smooth and dull, and the interior edges of the opening lack evidence of bone chipping. The uniformity and regularity of this opening indicate that the perforation was the result of careful scraping.

There is a growth of very fine bone spurs at the front of the interior opening. It can be concluded that this perforation was a trepanation done when the person was alive.

The motives for carrying out such high risk surgery can be summarized as follows:

1. To obtain bone discs from people alive or dead for protection from demons;

3. Surgical procedure to treat headache, epilepsy, insanity and Down syndrome;

4. For longevity and fashion reasons

Several scholars argue that healing is indicated by the smoothing of borders, rounding of openings, healed spongy texture and the growth of bone spurs. All our specimens unequivocally meet these criteria. They are, thus, examples of successful operations. Given the possibility that no anaesthetics or sterilization were available in early times, these are amazing achievements.

The successful trepanned examples described in this paper also reveal that this primitive surgical operation had remarkable therapeutic effects. It is worth mentioning that the earliest example in our study is that of the Dawenkou individual from about 5000 B.P. The meticulous treatment revealed by this operation is spectacular.”