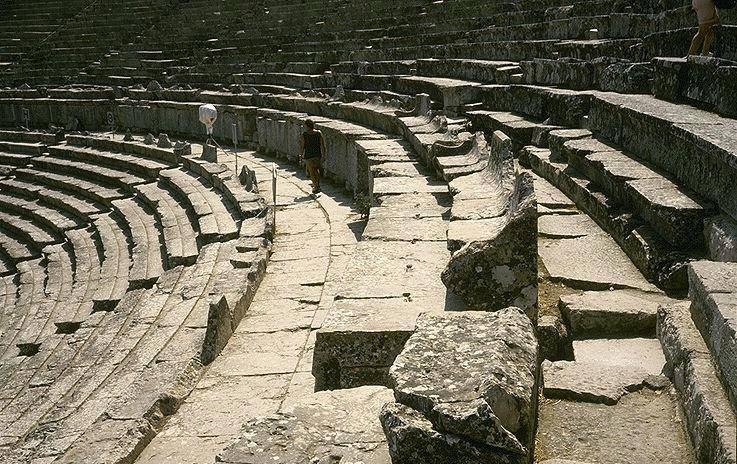 As the ancient Greeks were placing the last few stones on the magnificent theater at Epidaurus in the fourth century B.C., they couldn’t have known that they had unwittingly created a sophisticated acoustic filter.

But when audiences in the back row were able to hear music and voices with amazing clarity (well before any theater had the luxury of a sound system), the Greeks must have known that they had done something very right because they made many attempts to duplicate Epidaurus’ design, but never with the same success.

Researchers at the Georgia Institute of Technology have pinpointed the elusive factor that makes the ancient amphitheater an acoustic marvel. It’s not the slope, or the wind — it’s the seats. The rows of limestone seats at Epidaurus form an efficient acoustics filter that hushes low-frequency background noises like the murmur of a crowd and reflects the high-frequency noises of the performers on stage off the seats and back toward the seated audience member, carrying an actor’s voice all the way to the back rows of the theater.

While many experts speculated on the possible causes for Epidaurus’ acoustics, few guessed that the seats themselves were the secret of its acoustics success.

When Professor Nico Declercq (Georgia Institute of Technology) set out to solve the acoustic mystery, he too had the wrong idea about how Epidaurus carries performance sounds so well. He suspected that the corrugated, or ridged, material of the theater’s limestone structure was acting as a filter for sound waves at certain frequencies, but he didn’t anticipate how well it was controlling background noise.

“When I first tackled this problem, I thought that the effect of the splendid acoustics was due to surface waves climbing the theater with almost no damping,” Declercq said. “While the voices of the performers were being carried, I didn’t anticipate that the low frequencies of speech were also filtered out to some extent.”

But as Declercq’s team experimented with ultrasonic waves and numerical simulations of the theater’s acoustics, they discovered that frequencies up to 500 Hz were held back while frequencies above 500 Hz were allowed to ring out. The corrugated surface of the seats was creating an effect similar to the ridged acoustics padding on walls or insulation in a parking garage.

So, how did the audience hear the lower frequencies of an actor’s voice if they were being suppressed with other background low frequencies? There’s a simple answer, said Declercq. The human brain is capable of reconstructing the missing frequencies through a phenomenon called virtual pitch. Virtual pitch helps us appreciate the incomplete sound coming from small loudspeakers (in a laptop or a telephone), even though the low (bass) frequencies aren’t generated by a small speaker.

The Greeks’ misunderstanding about the role the limestone seats played in Epidaurus’ acoustics likely kept them from being able to duplicate the effect.

Abstract The Hellenistic theater of Epidaurus, on the Peloponnese in Greece, attracts thousands of visitors every year who are all amazed by the fact that sound coming from the middle of the theater reaches the outer seats, apparently without too much loss of intensity. The theater, renowned for its extraordinary acoustics, is one of the best conserved of its kind in the world. It was used for musical and poetical contests and theatrical performances. The presented numerical study reveals that the seat rows of the theater, unexpectedly play an essential role in the acoustics—at least when the theater is not fully filled with spectators. The seats, which constitute a corrugated surface, serve as an acoustic filter that passes sound coming from the stage at the expense of surrounding acoustic noise. Whether a coincidence or not, the theater of Epidaurus was built with optimized shape and dimensions. Understanding and application of corrugated surfaces as filters rather than merely as diffuse scatterers of sound, may become imperative in the future design of modern theaters.

In the classical world, the “asclepieion” at Epidaurus was the most celebrated and prosperous healing center; in its vicinity there was the amphitheater, designed by Polycleitus the Younger in the fourth century B.C. and famous for its beauty and symmetry. The original 34 seat rows were extended in Roman times by another 21 rows.

Marcus Vitruvius Pollio (first century B.C.) describes in his famous books “De Architectura” the state of the art in architecture and shows evidence that man was aware of the physical existence of sound waves. He writes, “Therefore the ancient architects following nature’s footsteps, traced the voice as it rose, and carried out the ascent of the theater seats. By the rules of mathematics and the method of music, they sought to make the voices from the stage rise more clearly and sweetly to the spectators’ ears. For just as organs which have bronze plates or horn sounding boards are brought to the clear sound of string instruments, so by the arrangement of theaters in accordance with the science of harmony, the ancients increased the power of the voice.”

This indicates that the construction of theaters was performed according to experimental knowledge and experience and that it was done such as to improve the transmission of sound from the center of the theater (the orchestra) toward the outer seats of the “cavea.” It has however always been believed, even in the same chapter written by Vitruvius, or the work by Izenour, that it was mainly the aspect of the slope of the theater, as a result of the constructed seats, rather than the seats themselves, that have been a key factor in the resulting acoustic properties.

The current study was triggered by the marvels of Epidaurus and by recent advances in the explanation of a variety of diffraction effects on corrugated surfaces. The theory of diffraction of sound is based on the concepts of the Rayleigh decomposition of the reflected and transmitted sound fields. The theory, earlier applied to describe a number of diffraction effects for normal incident ultrasound on corrugated surfaces, has been used successfully to understand the generation of ultrasonic surface waves in the framework of nondestructive testing. The theory was later expanded to include inhomogeneous waves and enabled a description and understanding of the backward
displacement of bounded ultrasonic beams obliquely incident on corrugated surfaces, a phenomenon which had been obscure for 3 decades. Even more, it was later exposed that predictions resulting from that theory were in perfect agreement with new experiments.

An expansion of the theory to pulsed spherical acoustic waves revealed special acoustic effects at Chichen Itza in Mexico. The advantage of the theory is its ability to make quantitative simulations as they appear in reality. From those simulations, it is then possible to detect and characterize patterns and characteristics of the diffracted sound field such as in the case of a short sound pulse incident on the staircase of the El Castillo pyramid in Chichen Itza.

For a study of acoustic effects at Epidaurus however, we are not interested in the response to a pulse. We are merely interested in how, for each frequency, sound behaves after interaction with the seats of the theater. Therefore the extensive diffraction theory, as used earlier, is the pre-eminent tool.

In what follows, we describe the geometry of the theater. Consequently we explain briefly how the numerical simulations are performed. Then we present and explain the numerical results. We end our paper with the most important conclusions.

Concluding Remarks It is shown that reflections on the foreground of the theater result in a better distribution of sound throughout the cavea so that all positions become acoustically similar to one another. The installation of seat rows on a smooth cavea generates diffraction effects that change the acoustic properties of the theater.

The intensity observed by the audience will be lower than in the case of a smooth cavea. This is not dramatic because the human ear is capable of adapting its sensitivity. It is more important that the damping effect is frequency dependent: the seat rows act like a filter. For frequencies beyond a certain threshold, second-order diffracted sound plays an important role and causes sound to be backscattered from the cavea to the audience making the audience receive sound from the front, but also backscattered sound from behind. This has a positive outcome on the reception of sound.

For frequencies below the threshold mostly noise, the effect of backscattering is less important and is to a great extent filtered out of the observed sound. The threshold frequency of the filtering effect is mainly determined by the periodicity of the seat rows in the cavea of the theater. For Epidaurus this threshold is around 500 Hz, which is usually the upper limit for wind noise.

(Source: “Acoustic diffraction effects at the Hellenistic amphitheater of Epidaurus: Seat rows responsible for the marvelous acoustics”, by Nico F. Declercq and Cindy S. A. Dekeyser)