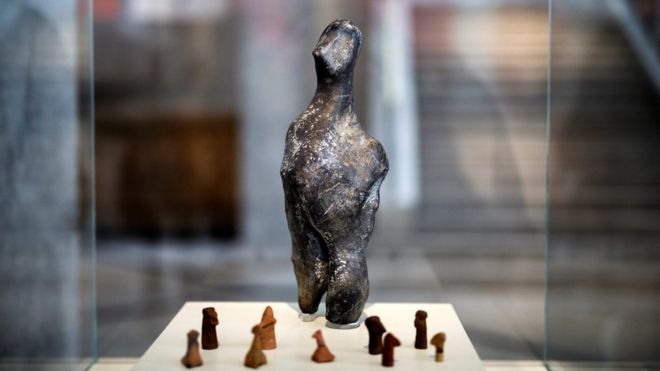 This post deals with a very interesting find from Neolithic Greece; a statuette carved from granite. 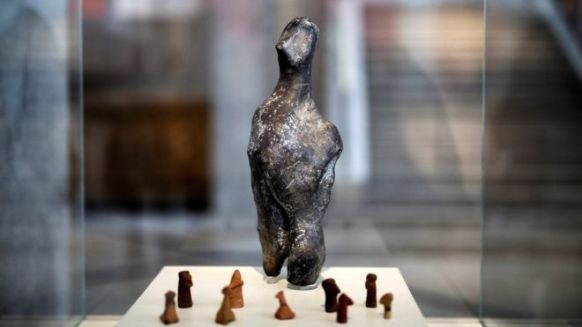 A statuette which Greek archaeologists are calling a “7,000-year-old enigma” has gone on show in the National Archaeological Museum in Athens.

The bird-like object was carved from granite – without the benefit of metal tools*, as it dates from the Final Neolithic period.

The 36cm (14in) statuette has a pointed nose, round belly and cylindrical legs.

But it has mystified archaeologists, who do not know exactly what it is or where it came from.

The museum says the figure is asexual, with no sign of breasts or genitals.

But it says it is difficult to say whether that is a result of the challenge of carving granite without metal tools*, or whether it was deliberate and could tell us something about the place of gender in Neolithic society.

A bird-like statuette dating back 7,000 years has mystified archaeologists in Greece who still do not know exactly what it is, or where it came from.

Carved out of granite, the 36 cm (14 inches) “enigma” statuette of the late Neolithic era has a pointed nose and long neck leading to a markedly round belly, flat back and cylindrical stumpy legs.

“It could depict a human-like figure with a bird-like face, or a bird-like entity which has nothing to do with man but with the ideology and symbolism of the Neolithic society,” Katya Manteli, an archaeologist with the museum, told Reuters.

Experts also cannot be sure of its provenance, as it belongs to a personal collection. They assume only that it is from the northern Greek regions of Thessaly or Macedonia.

Unlike most Neolithic figurines made of soft stone, it is carved out of hard rock even though metal tools were not available at the time*.

And while it is too short for a life-size depiction of the human figure, it is bigger than most Neolithic statues, which are rarely found over 35 cm tall.

“Regarding technique and size, it is among the rare and unique works of the Neolithic period in Greece,” Manteli said.

More puzzling still is the lack of clear indication of sex. Is it due to technical sculpting limitations? Or did the sculptor intend to create an asexual figure. Archaeologists believe the fact that the statuette is polished suggests the figure is in its final form, although they maintain that if the sculptor had the appropriate tools it would have taken a more specific form.

In the National Archaeological Museum with its magnificent monumental sculptures of historic times, the smaller than life-size statuette of the human figure (36 cm in height) can hardly measure up to them. Nevertheless, it clearly sums up the effort of the sculptor of the Final Neolithic period (4500-3300 BC) to carve in the round this rare work, out of such a hard rock as granite, without having at his disposal metal tools*.

Stone figurines, as a rule, are scarce, usually of small size and made of soft rocks. Furthermore, only a small percentage (5%) of Neolithic figurines falls into the category of largesized ones, namely over 35 cm in height. The bird-like figurine has a markedly rounded belly, while its back is flat. The legs, rendered as cylinders, are abruptly cut off, hampering the figure to stand stable. The dark grey surface is the end result of polishing, as indicated by the unworked facets of the pubic area, which display the original lighter colour of the stone.

*NovoScriptorium: Here we can admire the anti-scientific spirit prevailing in sections of current Science. Instead of labeling the finding as ‘a mystery’, it is far more reasonable to accept as a fact that metal tools (most likely in primitive forms) were being used during the Neolithic Age. As we see it, proper Science is obliged to revise its theories all the time, in accordance with the analogous new findings. Proper Science should not adopt a ‘dogmatic’ approach in any case. Any new find has the potential to overturn a standing theory partially or even completely. It is irrational, to say the least, to insist on up-to-now theories while facts prove them wrong – to any extent that this might happen.

What we have in this case is a statuette carved from granite. First, let’s see what is needed today in order to carve granite:

“Granite is the hardest carving stone. Instead of carving with a hammer and chisel, you must use a carbide-tipped tools, diamond saws and grinders. Granite can have a very fine grain or a very course one. It comes in a number of colors, can be highly polished and lasts outdoors. Many gravestones are carved from granite. You must wear a respirator when working with granite due to the silica content.” 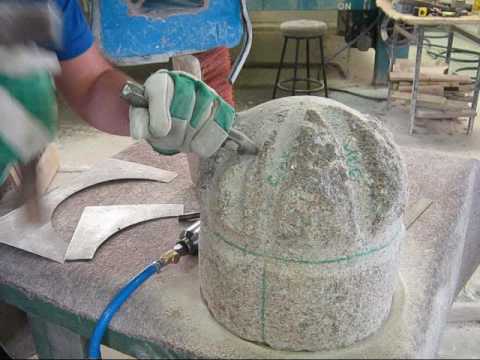 “Depending on the type of rock you are carving, you need some or all of the following tools: hammers (3 pound for removing large chunks, 2 pound for general carving, 1 pound for finer details); chisels (point for roughing out your carving, tooth for further refinement, flat and rondel for smoothing and to prepare the stone for finishing); pitching tool for removing large chunks of granite, tracing tool for more precision edges, rasps and rifflers smoothing; small grinder and sandpaper for shaping and polishing (course, medium and fine grit). For granite, you also need diamond saws, carbide-tipped pneumatic tools and an air compressor.”

Now, after this, can anyone seriously talk about ‘carving granite without metal tools’?

It is rather obvious; you do not carve granite with your hands or with wood, neither with stone.

Surprisingly, there appears to be no further official research on the find since the time of its exhibition (Feb-Mar 2017).