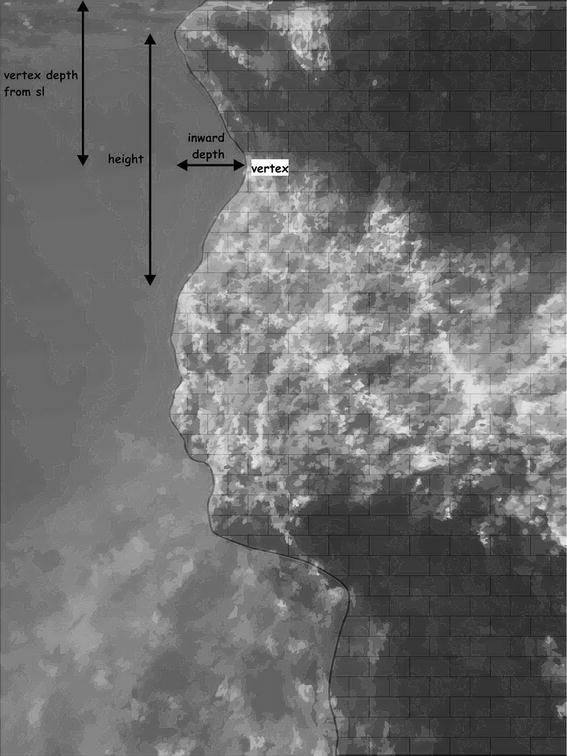 Abstract An underwater geomorphological survey along the coasts of six Cycladic islands (Sifnos, Antiparos, Paros, Naxos, Iraklia and Keros) revealed widespread evidence of seven submerged tidal notches. At least seven former shorelines were identified at depths between 280 ±20 and 30 ±5 cm below modern sea level. The vertical succession of several submerged notches suggests the occurrence of rapid subsidence events, potentially of seismic origin. Comparison with other sea-level indicators from Naxos and Delos islands indicates that these relative sea-level changes took place after 3300 BP and provides a rough estimate of the time of development of several submerged shorelines.The submergence of the uppermost notch at -30 ±5 cm is ascribed to effects of the recent global sea-level rise occurred during the last two centuries and, at least in part, to effects of recent earthquakes. Potential effects of the 1956 Amorgos earthquake with regard to coseismic and post-seismic vertical displacement have been recently investigated using a modellistic approach. According to the above, the lower shorelines should result from repetitive subsidence events and not from gradual subsidence. 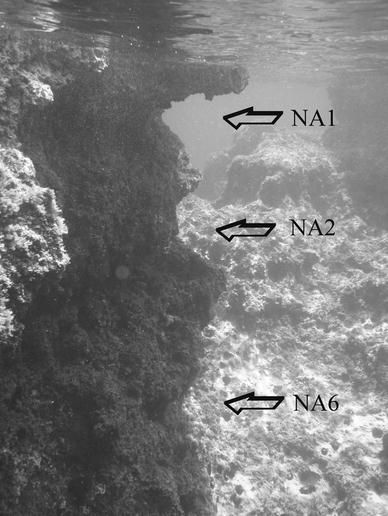 Introduction In the midlittoral zone (which corresponds to the tidal zone plus the average wave height range), which is very narrow in the Mediterranean, various parallel belts of endolithic microﬂora are more developed. Limpets and chitons eroding cyanobacteria are more abundant. They all contribute, by eating the belts of endolithic microorganisms, to the erosion of the underlying rock and enable the development (in sites sheltered from strong wave action) of a reclined U-shaped or V-shaped intertidal notch. This notch shows a vertex located near mean sea level (MSL), the base near the lowest tide level and the top near the highest tide level.

During the post-glacial relative sea-level rise, a tidal notch could generally not develop until at least the mid-Holocene (about 6–5 ka BP), when the sea-level rise slowed down. Notches also could not develop in areas of rapid tectonic movements exceeding the rates of bioerosion (generally between 0.2 and 1.0 mm/a) near sea level. Fossil tidal notches can be considered therefore as testifying of periods of relative sea-level stability and their study may provide information on relative vertical movements that affected Mediterranean carbonate coasts during the last millennia.

The vertical profile of a tidal notch is an excellent sea-level indicator, especially in tectonic areas. If the notch is submerged, the shape of the notch informs on the velocity of the relative subsidence. The inward depth of the profile provides information on the approximate duration during which MSL remained at the level of the notch vertex, under assumptions on the local bioerosion rate.

In the case of gradual subsidence, beyond certain subsidence rates, the notch cannot form; thus, when the rate of relative sea-level change is greater than the rate of bioerosion, a tidal notch does not form.

A tidal notch is preferentially formed in limestone, while gneisses, schists, amphibolites, terrestrial deposits and volcanic rocks are less affected by bioerosion. Most favorable conditions for notch formation occur where the cliff is vertical and smooth on its surface, while oblique cliff and irregularities in the rock surface could retard or even prevent the development of a clear notch profile. It has also been noted that tidal notches may occur at some locations, but not on the same rock at some nearby sites, indicating that hydrodynamics or changes in salinity, climate and sedimentation could have a strong inﬂuence on epilithic or endolithic flora and on grazing organisms.

The study area is situated in the central Cycladic islands (Aegean Sea, Greece). Its geology consists mainly of metamorphic rocks such as mica schists, marbles, gneisses, amphibolites, glaucophane schists and plutonic rocks. Our case study includes those Cycladic islands in which an important part of the coastal zone consists of carbonate rocks, and of course our field analysis was concentrated at sites described as carbonate rock in detailed geologic maps. Studied area was also selected in order to be close enough to Naxos island in order to make feasible the correlation with archaeological and stratigraphical data and radiocarbon dating.

The present work is aimed at showing an example of the potential usefulness, in continental shelf research, of submerged tidal notches, which are seldom used for the interpretation of vertical deformation, especially in tectonic and seismic areas.

Methods Tidal notches can form on carbonate coasts almost anywhere during periods of relative stable sea level, or during which relative sea-level changes occurred at a rate not exceeding the rate of bioerosion. Previous studies in various parts of the world, summarized by Pirazzoli, have estimated that intertidal bioerosion rates on calcareous shores may vary between 0.2 and 5 mm/a.These rates depend not only on the type of rock, but also from the local climate, hydrodynamical and biological environment and reach higher rates in tropical areas.

Detailed, accurate and systematic survey along the coastal zone of Sifnos, Antiparos, Paros, Naxos, Iraklia and Keros took place during spring and summer 2010. The coasts of the study area were systematically surveyed in detail, by boat, in order to access all sites and to establish lateral continuity of observations. Due to the complete absence of elevated shorelines and even to the surprising lack of clear marks of a tidal notch in the present midlittoral zone, even in rock formations that could be expected to be favorable for its development, our survey was extended underwater along the rock cliffs. During the survey, the local lithology of the Cyclades was taken into account. Forty-three divings were made along the study area in the Cyclades (thirteen in Naxos, four in Koufonissia-Keros, eight in Iraklia, eight in Paros, four in Antiparos and six in Sifnos).

Submerged tidal notches were identified. For each diving site, the time and the GPS coordinates were collected (with an average accuracy of ±5 cm), and in underwater, the observed features were measured in relation to sea level at the time of observation (with a precision that, due to waves, may be estimated to about ±10 cm) and photographed.

On each location, the accuracy was improved by multiple measurements. Comparisons were made with six hourly records of sea-level air pressure at Naxos, and with hourly tidal records at Sifnos (provided by the Hellenic Hydrographic Service), to confirm the validity of the interpretation. The present work is devoted to the distribution and size of the various submerged shorelines observed.

Discussion The data points show that until about 3300 years BP, a relatively stable sea level has been present in the region, represented by shoreline A at about -2.8 m. Starting at about 3300 years BP, the studied area has been submerged at an average rate of about 1 mm/a. Compared to the relative sea level during the preceding millennium, this submergence rate is definitely too larger than a fraction of mm/a predicted by isostatic modeling to be explained in terms of gradual glacio-hydro-isostatic factors. Moreover, features of submerged notches provide evidence that most submergence has occurred as the result of fast, discrete events rather than a gradual subsidence.

The intense seismic activity of the Aegean region may provide a possible alternative explanation of the observed subsidence events.

A general tectonic explanation can hardly be attempted from the few information available on historical seismicity in the area. It is generally assumed that most Cycladic islands are affected by a gradual subsidence that is ascribed to the thinning of the local earth crust and to isostatic processes that accompanied the post-glacial rise in sea-level. The absence of morphological coastal features indicative of uplift, such as marine terraces or benches, elevated beachrocks, marine notches, or raised Quaternary coastal deposits, are often interpreted as an absence of local uplift tectonism, at least during the Holocene.

Our study provides evidence that the Cycladic region has undergone a submergence during at least the last 2,000 years. Measurements have proven that the amplitude of submergence is too large to be explained only in terms of glacio-hydro-isostatic effects, so that also vertical crustal movements have contributed to the submergence. Moreover, the layout of observed notches indicate that observed submergence occurred as the cumulative result of discrete events rather than as a gradual, continuous phenomenon. For these reasons, our measurements strongly suggest that the Cycladic region has undergone, during the observation time window, a series of strong seismic events and/or short-time scale tectonic subsidence trends. 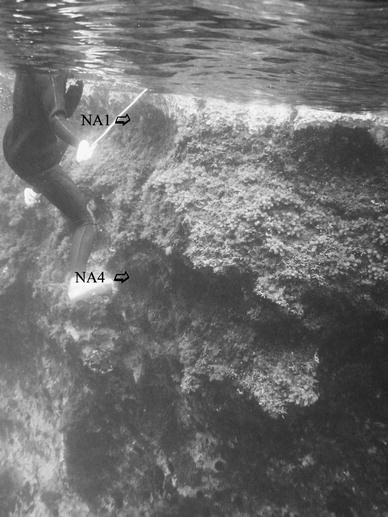 Conclusions Seven submerged notches found in SE Cyclades suggests the occurrence of rapid subsidence events, potentially of seismic origin. Comparisons with other sea-level indicators from Naxos and Delos islands indicates that these relative sea-level changes took place between about 3300 BP and very recent.

The submergence of the uppermost notch is partly ascribed to effects of the recent global sea-level rise occurred during the last two centuries and, partly to effects of recent earthquakes. The coseismic and post-seismic effects of that earthquake may have contributed to the observed subsidence in Sifnos, Antiparos, Paros, Naxos, Iraklia and Keros islands, also if the vertical displacements of other islands, more distant from the earthquake fault, seem to have been affected by other seisms. 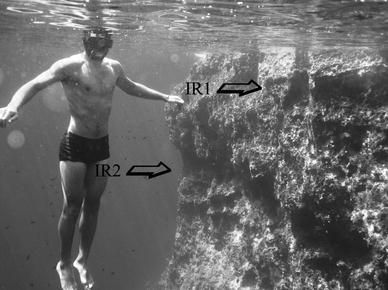