Here we present selected parts of the very interesting paper titled “The Astronomical Orientation of Ancient Greek Theatres in Relation to the Topography and the Greek Mythology“, by George Pantazis. 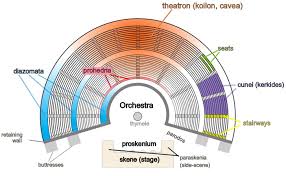 Abstract The study of the astronomical orientation of monuments in Greece has been strengthened over the last decade by the development and application of contemporary methods of measurement and analysis. The study has highlighted important findings related to monuments from the Antiquity up to the modern era. This study includes monuments of the classical antiquity, early Christian basilicas, Byzantine temples and mosques. However, an equally important Monument category is the ancient theatres. These monuments due to both their size and usefulness became the subject of study in this paper. This paper presents the results of a systematic research concerning the determination of the astronomical orientation of six ancient theatres in Greece. At the same time, the interpretation of their orientation and their possible relation to the mythology, the position and movement of constellations and the topography of their site is also studied. The geometric data produced with modern accurate methods of measurement and analysis certainly contributes to a more thorough study and interpretation of the placement and orientation of such large ancient constructions. This systematic research is carried out for six of the most important theatres in Greece. These are the ancient theatres of Dionysus, Delphi, Epidaurus, Ancient Epidaurus, Argos and Sicyon.

Introduction It is known that Archaeoastronomy is the science, which studies the interpretation of the orientation of the monuments. It is considered to be the meeting point between astronomy and archaeology.

The investigation of the astronomical orientation of ancient monuments has revealed significant findings that concern the monuments from the moment of their construction, their placement and the reason of their existence. The study of the astronomical orientation of ancient monuments requires their geometrical documentation. During this process, with the use of geometrical methods, the shape, size and position of each monument are assigned, which is a fundamental element to the progress of the study.

The correlation of ancient theatres’ astronomical orientation with the movement of celestial bodies or religious celebrations requires the systematic recording and study of historical and mythological data. Also the creation of their astronomical-oriented plans is essential.

The Ancient Theatres Ancient theatres are an outdoor amphitheatrical construction of a semi-circular ground plan around a circular square. In ancient times, performances were held only in specific periods and mainly had a devotional purpose to the god to whom each theatre was dedicated.

In its original form, around the 6th century BC, the ancient theatre consisted of a circular space, the orchestra, which was placed on a flattened space at the foot of a hill and the slope which was used as the place where the audience sat. In the 5th century BC, the ″koilon″ of the theatre is created, which was originally coated with wooden benches, the ″ikriomata″. Eventually, its stone form will prevail. The last piece embedded in the ancient theatre is the scene, ″skene″.

The ancient theatre of Dionysus is dated around the 6th century BC, and is located at the southern slope of the Acropolis in the prefecture of Attica. It is considered to be the first ancient theatre of Greece and it appears that most of the extant tragedies were written to be performed there. The theatre is dedicated to the god Dionysus and performances were held, during the Great (also called City) and Rural Dionysia celebrations.

The ancient theatre of Epidaurus is located at the eastern side of Mount Kynortio in the prefecture of Argolis and it is dated back to the end of the classical period, circa 340-330 BC. This is the finest preserved theatre and it stands out for its amazing acoustics. It was built in honor of the god Asclepius while the music and singing contests of Asclepieia took place there.

The ancient theatre of the village of Ancient Epidaurus is located at its eastern side, in the prefecture of Argolis. Its construction seems to have begun in the 4th century BC, developing up until the Hellenistic period and it is dedicated also to the god Asclepius.

The ancient theatre of Argos is constructed at the prefecture of Argolis, in the southeast side of the castle. It is considered to be one of the biggest ancient theatres since it has a capacity of 20.000 spectators. Dated around the 3rd century BC, the theatre hosted the Nemean drama contests, related to the worship of the god Zeus.

The ancient theatre of Sicyon is placed at the hill of the modern village Vasiliko, located 4km southeast of Kiato, in the prefecture of Corinth. It is dated circa 330-251 BC, in the Hellenistic period. The theatre is dedicated to the god Apollo and celebration events in his honor were also hosted there.

Finally, the ancient theatre of Delphi is located in the archaeological site of Delphi at the foot of the mount Parnassus, in Phocis prefecture. Vocal and instrumental music competitions were held in the theatre, as part of the Pythia games as well as other rituals. The theatre was dedicated to Apollo Musagete. Moreover, the Sotiria games in honor of Zeus the Saviour and Apollo were also hosted in this theatre.

Documentation Method The purpose of the geometrical documentation of the ancient theatres is to create plans in an arbitrary local reference system, oriented in relation to the astronomical north. By using these plans the main axis of each theatre as well as its astronomical azimuth, which are necessary for further investigation are determined. Also the possible correlation with stars and star formations or special celestial bodies and constellations are examined. For all the theatres, the necessary measurements were carried out for the transformation of the already existing plans to the required reference system.

The Relation to the Constellations and the Greek Mythology Firstly, it is necessary to define the period during which the performances were held and transform them to their modern equivalent. The outcome of this research also showed an average time period, aided by our knowledge on the chronology of theatres. What was also researched was the relation that the astronomical azimuths of the main axes of ancient theatres might have had to certain stars or star formations as well as to certain planets for each one of these dates during the average time period that each theatre is known to have been built.

It appears that the orientation of each ancient theatre is towards to a constellation, which is relevant to the mythology of the god to which the theatre is dedicated.

The main axis of the theatre of Dionysus, during the celebration period of the Great Dionysia and Lenaia, meets the Hyades constellation. This happens during the period starting from December 1st until January 25th. The period that the Rural Dionysia are celebrated there is a total view from the site to the Hyades constellation which consists of 34 stars. According to mythology Hyades were the daughters of Plioni and Atlas. When Dionysus was born his father Zeus, asked them to breed his son. Also Hyades are identified as the nymphs of Dodoni, who are the followings of Dionysus, as Ambrosia, who was metamorphosed in to vine, and Koronida. 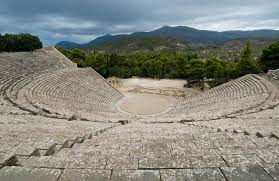 At the theatre of Argos, during the celebration period of the Nemean games, June 22nd to July 21st, the main axis of theatre meets the Aquila star. This star is named Altair and belongs to the constellation of Eagle. According to the myth this constellation represents the Zeus’ eagle, which holds in one of its feet the Zeus’ lightning and in the other Ganymede, who was brought from Troy in order to be cupbearer for Zeus and the other gods of Olympus.

At the theatre of Sicyon, during the celebration date of the Apollonian games (May 1st) the main axis of the theatre meets the Lyra constellation. The corresponding myth refer that Lyra’s constellation represents the lyre that god Hermes gave to god Apollo as a gift. Also this was the Orpheus’ lyre who was the son of Apollo and of muse Kleo. Lyre was coherent to the worship of Apollo as the flute was coherent to the worship of Dionysus.

The main axis of Delphi theatre is oriented towards the Delphinus constellation at the moment when the Lyra constellation is situated at the zenith of the night sky. Delphinus constellation symbolizes the dolphin which has strong relation with Apollo and the basic myth about the site of Delphi as it is considered that the place was named after this. This phenomenon occurs four dates 21st March-May-June and 22nd August. However it is referred as more characteristic the March 21st, when this phenomenon takes place 18 minutes before the rising of Sun, thus it is coincided with the heliacal rising of Delphinus. That means that apart from the rising of Vega (a Lyra’s), are also considered important the meridian transit of the star at the place.

The Interaction of Topography, Audience and Orientation Recent researches have convinced that the facing of theatres choice was firstly based on view reasons, in particular in south of Italy, where it was found that attendants were not disturbed from sun in front, while in Sicily the preferred exposition claims for sun heating the terrace of the cavea in the first afternoon, may be a little time before attendants will be present. The second choice allows to have some late afternoon rising wind along the terrace, or cavea, so to rise up sound rays just as necessary to reduce the absorbing effect from audience’ hairs. The majority of the theatres in Italy are oriented so that the audience is in front of the sea, and it is well known that in the afternoon some kind of breeze is quite always directed from the sea to earth: again we have a little rising effect for sound rays coming from the scene that, in Greek Theatres, was almost completely open on the backside.

Based on the above findings apart from the relation of theatres orientation with the ancient myths and constellations there are also two significant aspects that must be taken in to consideration. The first is the topography of the site where the theatre was built and the second is the convenience of the audience to watch the performances.

All theatres have alternative orientation far away from the East or west in order to collect the lateral sunlight and not straight either at the sunrise or the sunset, as the performances were took place during all day. Also it is notable that the theatres of Delphi and Sicyon have perpendicular orientation to each other as the theaters of Epidaurus and Dionysus have almost parallel orientation.

The orientation of the four out of six theatres is towards the sea so as a breeze could be directed from the sea to earth in order to have a little rising effect for sound rays coming from the scene.