In this post we present the Minoan seal-stone CMS XI No. 325. It is a finding that, if proved genuine, implies radical changes on the History of Alphabetical Writing.

First of all, let’s see what is officially said about this particular seal-stone:

A lion in right profile standing upright on its back legs is biting the neck of a hooved quadruped standing in front of it in the same profile and posture. The latter has a long neck which is bent 90° to the back. A Π-shape is created by the combination of the bodies of the two animals. In the field are engraved five Greek letters: Μ, Α, Ν, Κ, Λ.

Reported to have been found in Milos

The Greek letters have been engraved on the seal face with direction left-to-right. This suggests that the motif was meant to be read directly from the seal face (and not its impression).

The seal shape, stylistic considerations (static as opposed to flowing forms) and the Greek letters speak against an Aegean origin of the piece. The composition on the other hand, brings to mind compositions encountered in animal attack scenes on seals of the Late Bronze Age. Margaret Gill has suggested that this seal is a 19th century imitation of an Aegean piece (CMS XI, pp. XXII, 335).

Gem engravers of the 18th and 19th centuries often copied or were inspired by ancient Greek and Roman seals. The seal was bought by the State Hermitage Museum in 1865 and therefore before Schliemann’s discovery of Mycenae and Tiryns (after which artifacts could be recognized as products of the Aegean Bronze Age). Therefore, if this seal is a 19th century product inspired by an Aegean seal it is almost certain that the engraver would not have identified its prototype as Aegean. The piece has a twin to another ring stone kept in the same collection. The two pieces were probably made together.

Hard stone, Mohs 7. Microcrystaline translucent but cloudy orange, red, or brownish variety of quartz. Dark to black clouding is often encountered in the interior of the stone. Imported in the Aegean. 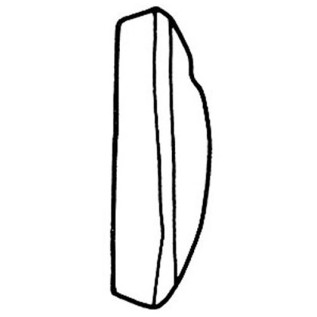 Carnelian (also spelled cornelian) is a brownish-red mineral commonly used as a semi-precious gemstone. Similar to carnelian is sard, which is generally harder and darker (the difference is not rigidly defined, and the two names are often used interchangeably). Both carnelian and sard are varieties of the silica mineral chalcedony colored by impurities of iron oxide. The color can vary greatly, ranging from pale orange to an intense almost-black coloration. It is most commonly found in Brazil, India, Russia (Siberia), and Germany.

The red variety of chalcedony has been known to be used as beads since the Early Neolithic in Bulgaria.

Carnelian was recovered from Bronze Age Minoan layers at Knossos on Crete in a form that demonstrated its use in decorative arts; this use dates to approximately 1800 B.C. 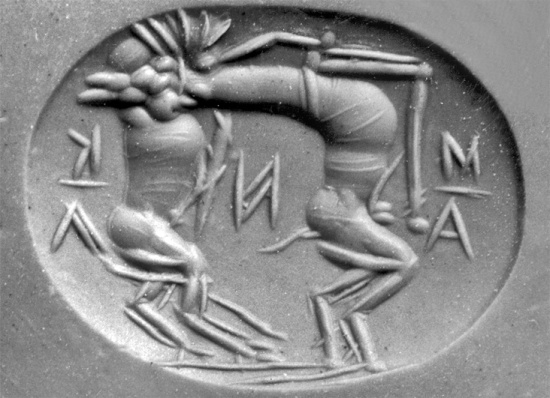 NovoScriptorium: We have researched and affirmed that a good number of seal-stones from Crete were made of cornelian, as there is a decent number of published papers on this fact.

Therefore it is not at all impossible for CMS XI no. 325 to have been produced, as a work of art, in Minoan Crete. We can aslo be 100% positive that the rough material was imported in Crete from elsewhere.

From Scholiastes to Dionysius of Thrace, (183 1) we learn that: “Dosiades (note: 3rd century BC) claims that they (note: the letters) were invented in Crete“.

Therefore, there is a testimony from Antiquity that Crete could indeed be one of the places that an archaeologist would look for possible alphabetical signs.

Incredibly, it is stated that: “Greek letters speak against an Aegean origin of the piece“! How is this ‘reasonable’? we truly wonder.

The standard ex oriente theory teaches that alphabetic writing, among many other things, originated from somewhere in the Near East. Before anything else, we suggest a read of the following article:

In our opinion, the reason that this item is so easily characterized -as we officially saw above- as a ‘forgery’ of recent centuries is clear: it would strikingly overthrow the current ‘theories’ on alphabetical writing. But how scientific is this rejection of its authenticity really?

The specialists agree that the item “brings to mind compositions encountered in animal attack scenes on seals of the Late Bronze Age“, but, without having it appropriately Dated, with the use of available modern methods, they conclude on its…’forgery’! How scientific is this?

This post aims to provoke exactly this: a proper, modern, scientific Dating of the item.