During antiquity, ancient Greek physicians tried to explain cancer in a logical way. In 5th century BC, Hippocrates (460-377 BC) provided to science a rational and systemic basis. One of the most interesting and influential legacies of the Hippocratic approach was the humoral theory of diseases. According to it, disease was determined as a disturbance affecting the whole person through some imbalance in the four bodily fluids, or humors, of blood, phlegm, yellow bile, and black bile. Health was defined as balance between the body fluids (eukrasia) and external environment. If this balance was disturbed, the result was disease or dyskrasia. Based mainly on humoral theory, ancient Greek physicians developed the black bile theory of cancer, stating that an excess of black bile in the body could provoke cancer.

Furthermore, in Hippocratic Corpus the terms “karkinos” (cancer) and “karkinoma” were coined, referring to the shape of a crab. The terms “karkinoma apertus” for superficial and “karkinoma occlusus” for deep tumours were used as well, to describe a non-healing swelling or ulceration of a probable malignant origin. Hippocrates also introduced the term “scirrhus” to describe hard tumours.

Surprisingly, uterine cancer takes up little space in the writings of the ancient Greek physicians. However, few medical authors recognized uterine cancer and contributed in their own way in the development of a specific disease entity. 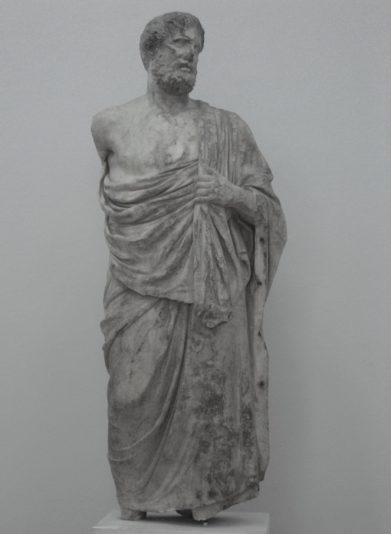 He had also realized the importance of the vascular system for the circulation of “malignant matter” (black bile).

In the following centuries scarce texts are preserved on uterine cancer and Hippocratic notions endured as a standard-setting example of medical practice.

In the History of Animals, the Greek philosopher and scientist Aristotle described first the surgical removal of ovaries and uterus (hysterectomy) on animals. However, the reason for this operation was not a malignancy. Aristotle had observed, among others, that the removal of the ovaries of the pigs had decreased their sexual appetite. The knowledge to carry out so difficult for the time operations allow us to suppose that ancient Greek physicians had probably tried to perform removal of the uterus in an attempt to cure this uterine carcinoma. Adequate evidence to support this hypothesis can be found in the centuries that followed.

The distinguished Roman encyclopaedist Celsus in his work “De Medicina” devoted a whole chapter on uterine cancer. Among others he mentioned: “Females are subject to a malignant disease of the womb…Sometimes this affection deprives the patient of all sensibility, in the same manner as if she falls in epilepsia. Yet with this difference that neither the eyes are turned nor does foam flow from the mouth…there is only a profound sleep”.

Celsus described the anterior groin swelling, the local oedema due to the vein compression, and probably he was the first to recognize nodal metastases.

Celsus writings forgotten for a while, they were rediscovered during Renaissance and
they were highly appreciated by physicians for their medical content.

Soranus , the great Greek physician and gynaecologist who practiced in Rome, left us the most valuable treatise on obstetrics and gynaecology. Soranus’s anatomical knowledge of uterus was excellent and he also described the cancer of the uterus: “The uterus presents sometimes without ulceration sometimes with ulceration. In this case we may experience pains, sharp pains in the kidney’s, in the vertebrae, in umbilicus. The evolution of the disease is malignant”. Moreover Soranus performed hysterectomy, strengthening the hypothesis that from the era of Aristotle such an operation was probably possible. As it is mentioned in Soranus’s work: “Uterus should not be considered as an essential organ for life, not only because it is usually prolapsed but in some cases, it can even be cut, without death to occur… if the entire uterus is bruised (blackened), we must cut it off entirely, not only because some previously mentioned writers noticed that resection is harmless, but also because it has ceased to be a vital organ. In the case of ulcer (cancerous) from continuous prolapse and the creation of adhesion to the labia…, more preferably and most secure is to spare the uterus something from the labia as the separation cannot be accurate…in the case of a more local bruise, uterus could be excised partially”.

Soranus was also a precursor of the operative gynaecologic, as he was strongly familiar with the surgical instruments, such as vaginal endoscopes (speculum-dioptras), hedrodiastoleus (rectal spectum) and “kauterion” (cautery) etc.

Galen, the greatest medical authority of antiquity, followed and supported Hippocrates’ opinions on uterine cancer. He described scleroma of the uterus as a hard tumor which originated from phlegmon of the organ and which might be of long duration.

Concerning the diagnosis of a uterine cancer after clinical examination, Galen wrote that “when the mouth of the womb is closed, and the neck is at the same time hard to the touch, this points to the uterus being diseased”. He also mentioned that the affected women were suffering from extreme pain which goes also to their mouth and legs.

It is of interest that in Galen’s work we may find the name of Maea (or Maia), a woman gynaecologist who mentioned in her work several uterine pathologies.

In his book “On the causes and symptoms of acute and chronic diseases” Aretaeus of Cappadocia, a Greek born physician who studied medicine in Alexandria and practised in Rome, provided the first accurate description of cancer of the uterus. In the chapter entitled “On uterine affections”, Aretaeus mentioned the predisposition of uterus to malignancy “the womb of the female…is conductive to many bad diseases”, recognizing also the high prevalence of this type of cancer.

According to Aretaeus the non ulcerated form presents with the appearance of a tumour inside the uterus: “In another variety of cancer there is no ulceration, but a hard, unyielding lump that extends through the wall of the uterus”. Aretaeus believed that both forms were of cancerous nature, but the ulcerated one had the worse prognosis.

Ancient Greek medical authors recognized cancer of the uterus as a specific entity and provided several descriptions concerning symptomatology, clinical examination and treatment. Their views reflect the level of medical practice in a period that microscopy and pathology were unknown and surgery was not advanced. Their notions on uterine cancer survived and developed further in the following centuries thanks to the work of several brilliant Byzantine physicians.