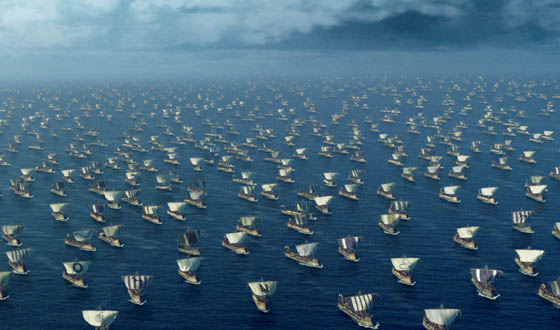 In this series of articles we attempt an in-depth analysis of the Achaean ‘Catalogue of ships‘. Using the etymology of the various names, we receive valuable historical and cultural information.

And they that dwelt in Aspledon and Orchomenus of the Minyae were led by Ascalaphus and Ialmenus, sons of Ares, whom, in the palace of Actor, son of Azeus, Astyoche, the honoured maiden, conceived of mighty Ares, when she had entered into her upper chamber; for he lay with her in secret. And with these were ranged thirty hollow ships.

NovoScriptorium: Our analysis is aided by the Liddell & Scott Lexicon.

For the word ‘Ασπληδών‘, we have not managed to find a proper or obvious etymology . There is only one word that looks close, the word ‘σπληδός‘ = ‘σποδός’ that means ‘ash, cinders‘. Could the ‘Α’ in the beginning denote ‘negativity’, i.e. ‘α-σπληδών’? and hence mean the place ‘without ash/cinders‘? Unfortunately, we cannot at all be certain.

i) derives from the word ‘όρχος‘ which means ‘series of vines‘ but also ‘row of fruit trees‘ (The region has similar characteristics even in our times). The word’s type ‘όρχαμος‘ leaves us with no doubt about the root-word for ‘Ορχομενός‘.

ii) The word ‘όρχος‘ also means ‘όρυγμα‘ = pit, moat, deeply dug place. According to the Lexicon, this word refers to:

a) in siege sewers

b) in metal working

The adjective ‘Μινύειον‘ to describe ‘Ορχομενός‘ clearly relates to the Minyans, to denote something which is ‘Minyan‘. Therefore, there is a strong possibility that Homer used this name with the dual meaning to fully describe the region of Orchomenus. Amazingly, archaeological evidence confirms that Orchomenus indeed had, during the Bronze Age, all these things that this single word contains.

Please take some time to read about the Minyans and their works: The study of geotechnical works constructed in Mycenean Greece reveals skilled engineering, excellent experience and knowledge on construction-site management and project management and 13th century BC Myceneans: The first hydraulic civilization of Europe? Man’s most ancient attempt to control an aquatic environment using hydraulic works

The word ‘Ασκάλαφος‘ is actually the name of a bird. Additionally, for the same word, from another source, the Suidae (or Suda or Souda) Lexicon we learn: ‘παρά το ασκελές της αφής, ο λίαν σκληρός’, which relates the word to something (‘αφή‘ means ‘touch‘) ‘hard‘ and/or ‘rigid‘. As Ascalaphus was a ‘son of Ares’, the second etymology seems far more applicable.

The word ‘Ιάλμενος‘ could derive from the word ‘ιάλεμος‘ which means ‘lament‘, but as an adjective it also means ‘unfortunate‘ and ‘melancholic‘. But another etymology of the word seems far more applicable: it derives from the verb ‘ιάλλω‘ which, in its original meaning, meant ‘hurl, cast‘, combined with the word ‘μένος‘, that is ‘wrath, anger‘. Hence, it would denote someone who is involved in War, someone ‘good at casting/throwing‘. The second etymology is evidently closer to the truth of the text. And that is because Homer calls both ‘Ασκάλαφος‘ and ‘Ιάλμενος‘ as ‘υίες Άρεως‘ = ‘sons of Ares (Mars)‘. And as we all know, Ares (Mars) was the god of War.

The word ‘Άκτωρ‘ derives from the verb ‘άγω‘ and it means ‘guide, head‘, i.e. it denotes the ‘leader‘.

The word ‘Αζεΐδης‘ means ‘υιός του Αζέως‘ = son of Azeus. But what does ‘άζω‘ mean? The verb has the following meanings:

On the other hand, there is a possibility that it derives from the verb ‘άζομαι‘ which means ‘respect, have fear of someone‘.

Having in mind the massive works of the Minyans in their attempt to partially drain the lake Kopais, we cannot at all exclude that Homer used the word in this sense.

If our assumption is correct, then we may learn something else from this excerpt. During the reign of Actor, the son of Azeus, Astyoche gave birth to Ascalaphus and Ialmenus. This could then imply that the famous drainage works were concluded two generations before the Trojan War. It is also possible that Homer intentionally uses here another word with dual meaning so as to make a complete description, i.e. a (if derived from ‘αζομαι‘) respectful leader (Azeus) that organized great (if derived from ‘άζω‘) drainage works, too.

The fact that Ascalaphus and Ialmenus, the two leaders of Aspledon and Orchomenus, were sons of Ares ( =War) and Astyoche ( = ‘she who guards the city’) before anything else implies that the people of this place were very familiar with war and also capable in it (like, more or less, all Myceneans really). The phrase ‘ὃ δέ οἱ παρελέξατο λάθρῃ‘ may imply ‘rape‘ instead of ‘he lay with her in secret‘, because it is Ares who acts ‘secretly’ in order to lay with her on the bed. In this case, the whole narration, as an allegory, may indirectly imply some kind of coup in this polity or a violent change of leadership after events of war.

Finally, the Aspledon & Orchomenus region gave 30 ships for the expedition. Each similar Mycenean ship carried 120 warriors, as we have seen in the analysis for Boeotia. Therefore, the army sent out by Aspledon & Orchomenus region for the expedition would sum up 3,600 warriors. A quite decent number indeed. Similar arguments, on population statistics, to the ones we used in our analysis for Boeotia are also applicable here.

One thought on “Homer’s Iliad; the ‘Catalogue of ships’ and what we can learn from it – Aspledon & Orchomenus”