Trepanation, a neurosurgical procedure in which a hole is drilled through the skull up to the dura mater, is one of the world’s earliest practiced surgical procedures. Evidence of its use can be traced back as far in time as 10,000 B.C., and as widespread as Mesoamerica, South America, Africa, Asia, and Europe. The use of trepanation in India has been traced as early as 2,350 to 2,050 B.C. (4,300–4,000 bp), to a skull from the Neolithic pit dwellers of Burzahom in the Kashmir Valley region in-between present day India and Pakistan. The Edwin Smith Papyrus, the world’s earliest known medical document dated around the 17th century B.C. from Ancient Egypt, contained the first written descriptions of neurosurgical anatomy in soldiers injured during battle. The Papyrus is thought to have contributions from multiple authors and contains rational treatments for head and spine cases, but it does not offer any specifics about the management of head injuries using trepanation. Although historically, the first written descriptions about the use and warnings regarding trepanation in the management for head injuries has been attributed to Hippocrates, the great Greek physician scientist during the fifth century B.C., Susruta appears to have described cranial surgical procedures dealing with warfare injuries and trepanation a few 100 years earlier.

During the Vedic period of Hindu medicine (1,500–800 B.C.), all knowledge, including medicine, was passed down through poetic hymns consisting of songs and prayers. Included among the four Vedas, the oldest scriptures of Hinduism, were hymns about medicine and surgery. Interspersed among these hymns were medical treatments consisting of amulets, magic, offerings, penances, and other early forms of witchcraft and incantations. Not until ∼800 B.C., did Susruta begin to rid Indian medicine of its magical practices and lead it toward a more organized and studied approach.

Susruta, claimed by several authors and historians “as the father of surgery,” lived approximately around 800 to 600 B.C.. As described by Keswani, the time period beginning around 1,000 B.C., was a time where significant advances were made in mathematics and exact sciences, including astronomy and physics.

Susruta, the son of the well-respected sage Vishwamitra, is believed to have been born near Bihar, which is located in the Eastern part of India. Although numerous accounts of how Susruta amassed his vast medical knowledge exist, most accounts point toward Dhanwantari, “the physician to the gods.” Although there has been some confusion about whether it was Dhanwantari or Divodasa who gave Susruta the Ayurveda, a system of traditional or alternative medicine native to India, it is clear that Susruta was the recipient of this knowledge. Susruta, along with other disciples requested that Dhanwantari teach them the science of healing to help those afflicted with illnesses. Dhanwantari agreed to provide the information they requested and began his instruction of the Ayurveda with the topic of surgery. He stated,

“Of all branches of medicine, the science and practice of surgery is most useful, for, with its help one could gain the results very soon. By its practice, we may acquire fame, piety, and may secure Heaven after death.”

Plastic surgeons claim Susruta to be the “father of plastic surgery” for his methods of nasal reconstruction and skin flap surgery. Urologists regard some of his principles and hypotheses for urological procedures, including vesicolithomy, as advanced for his time. In addition to his contributions to neurosurgery, many scholars credit him with discoveries in the fields of ophthalmology, dental surgery, and cardiology, among other fields.

Susruta is accredited for the systemization of early Indian medicine in his treatise, the Susruta Samhita. He taught and practiced medicine in Banaras, an ancient city on the banks of the Ganges river. In a structured program, he encouraged future surgeons and physicians to take hands on approaches to medicine and surgery through the study of anatomy. This was challenging during that time period, as the mutilation of dead bodies was prohibited. To train surgeons without cadavers, he advised his pupils to practice on the carcasses of animals, fruits and vegetables, lotus stalks, and leather bottles among other items to acquire the skills required for particular procedures. Susruta eventually discovered a method in which he could study cadavers layer by layer to understand the complex anatomy present in the human body. This process, termed Avagharshana, is described in the translation of the Susruta Samhita by Bhishagratna:

Cover a dead body with Kusa grass and place it at the edge of the water of a rivulet. After three days take it out carefully, and gradually take off the successive layers of the epidermis and dermis of the muscles beneath by gently and lightly rubbing it over with a soft brush. Thus the smallest and thinnest arteries, which have by this time swelled and obtained a distinct existence are made palpable everywhere even to the minutest.

After completing the training program, each student took an oath, similar to that of Hippocrates, a few hundred years later, before they began treating patients:

Thou shalt renounce lust, anger, greed, ignorance, vanity, egotistic feelings, envy, harshness…falsehood, idleness, nay all acts that soil the good name of a man…live the life of a truthful, self-controlled anchorite and be obedient and respectful towards thy preceptor…Thou shalt help with thy professional skill and knowledge… the helpless and those who shall come to thee from a distance…and thou shalt give them medicine [without charging for it any remuneration whatever]…

Through his skills as an educator, Susruta was able to propagate the teachings of Ayurveda imparted to him.

Two early Indian texts, the Susruta Samhita and the Charaka Samhita form the foundation of Ayurveda, the Indian system of traditional medicine. The Samhitas, Sanksrit for “collection of mantras” or “collection of knowledge,” refer to eight branches of Ayurveda. Charaka, who was a contemporary of Susruta, created the Charaka Samhita which focuses more on medicine. The Susruta Samhita, although a complete work on medicine during that time, gave a special attention to surgical treatments. It is divided into two parts, the Purva-tantra and the Uttara-tantra, which encompass specialties such as medicine, pediatrics, geriatrics, otolaryngology, toxicology, and psychiatry. In 184 chapters, it describes in detail approximately 1,120 specific diseases and over 300 types of operations that require 42 different surgical procedures. His other contributions include instruction on performing laparotomies for the delivery of babies, removing of gallstones/urinary calculi, and even repairing intestinal transections with the heads and mandibles of large black ants.

In total, Susruta used and gave a detailed description of 121 instruments, 101 blunt instruments and 20 sharp instruments. He classifies the instruments into six categories by their shapes (cruciform, pincerlike, spoon-shaped, tubular, rodlike, and accessory instruments). 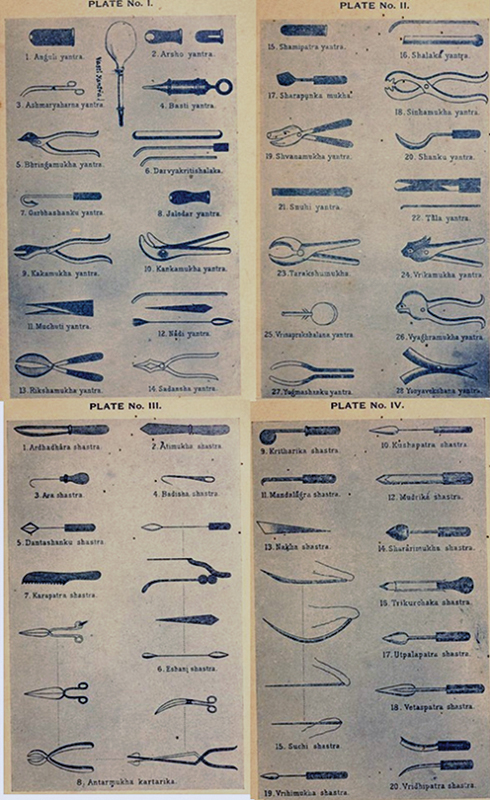 Along with his advances in the fields of plastic surgery, ophthalmology, and urology, Susruta has been touted as an innovator in the field of neurosurgery. According to Banerjee et al:

This would indicate that Susruta had developed neurosurgical methods and procedures dealing with head trauma and probably evacuation of intracranial hemorrhages. The trephined skull from Kashmir discussed earlier provides evidence that others before Susruta had made attempts at gaining access to the cranium, but Susruta’s procedures would be one of the first mentions regarding the early management of neurosurgical trauma.

Furthermore, Susruta had a far advanced understanding of the nervous system, as can be attested by his descriptions of the afferent and efferent nerves:

And finally, his description of the cranial nerves demonstrates how he meticulously studied the neuroanatomy of both his patients and his educational cadavers:

The surgical knowledge and skill set can be attributed to the number of wars and small battles that took place during the Vedic period. Soldiers were injured with weapons such arrows, swords, and maces. Surgeons had to be skilled in removing foreign objects, controlling hemorrhage, and dressing wounds. To surgically intervene in these traumatic injuries to the head, Susruta had to innovate new tools and techniques.

To achieve hemostasis in highly vascular regions of the body such as the cranium, Susruta described the use of cautery years before Hippocrates and Abulcasis as described in the Hippcratic Corpus and Kitab al-Tasrif, respectively. Susruta writes:

A fire (cautery) is better than an alkali as far as its healing property is concerned… A burning of the skin is accompanied by a peculiar bursting or cracking sound. The skin becomes contracted and emits a fetid smell. Similarly, in a case where the flesh is burnt, (the affected part) assumes a dove color of (blackish brown), marked by pain and little swelling, and the incidental ulcer becomes dry and contracted…The regions of the eye-brows, forehead and temple bones, should be cauterized in diseases affecting the head as well as in a case of Adhimantha (Ophthalmia).

On the basis of these writings, Susruta was aware of the vascularity present in the cranium, and had utilized cautery to prevent the patient from exsanguination. Susruta’s descriptions of the pathologies “affecting the head” and nervous system, anatomical descriptions, and management of hemorrhage demonstrate his far advanced understanding of the nervous system and the management of neurosurgical trauma.