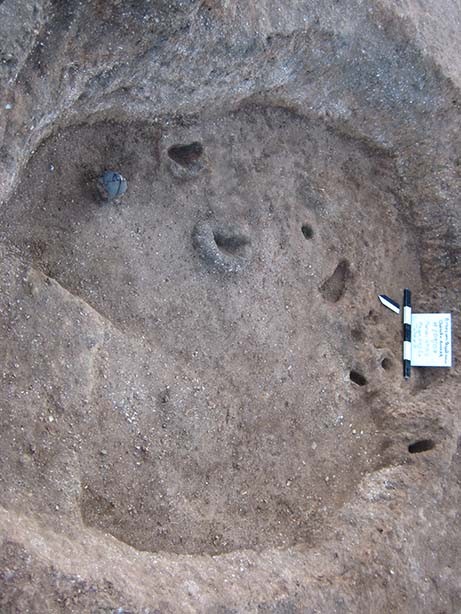 Very few Neolithic sites are known from central Epirus. Although sites of this date are well attested in neighbouring Albania and in western Macedonia, they remain scarce in central Epirus as a result of both limited research activity and the physical constraints of the landscape. Until recently, only four sites have yielded any Neolithic pottery: Asfaka on the edge of the drained Lake Lapsista; Kastritsa on the edge of Lake Pamvotis; Doliana next to the sources of the Kalamas River; and the rockshelter ‘Gouves’ on Mount Tomaros. In particular, the conditions in central Epirus seem to have been very unfavourable for settlement and exploitation during the Early Neolithic, with only a single site (Asfaka) dated to this period. Recent discoveries at the site of Episkopi therefore promise to improve our knowledge of the nature of the settlement and of the exploitation of inland Epirus during the Early Neolithic.

The site of Episkopi extends along the slopes of a low hill, surrounded by small seasonal lakes (polges), on the southern edge of the Ioannina Basin, an ecosystem that favours the cultivation of cereals and pulses, and the grazing of domesticated animals. From 2007–2010, the former 12th Ephorate of Prehistoric and Classical Antiquities (Ioannina, Greece), under the direction of Georgia Pliakou, conducted excavations at Episkopi Servianon, where a Hellenistic rural facility and a Roman cemetery have been uncovered. On the plateau of the hill, in part under the Roman cemetery, excavators have revealed a number of pits containing a large number of stone tools and pottery sherds. Some of these tools are dated to the transition from the Early to the Middle Neolithic periods. The pits were dug into the natural clay and, in some cases, preserved traces of postholes, probably indicating the existence of hut structures of perishable materials. The lithic assemblage is overwhelmingly characterised by blades and bladelets produced almost exclusively from local chert.

The preliminary study of the ceramic assemblage suggests that the vessels were crudely constructed and poorly fired. The shapes are simple with red and brown monochrome surfaces. Open forms dominate, and where shape is evident, bowls and jars appear common. Some sherds have black burnished surfaces, and a group of sherds with impressed decoration, with parallels in Albania and Italy, is of especial interest.

The impressed pottery connects Episkopi with the much wider area of the Early Neolithic Adriatic complex. In addition, a distinct ware has been identified, characterised by very light sherds with many holes on their surface, due probably to the mixing of plant fibres with the clay during production.

Episkopi is a site that has the potential to answer important archaeological questions relating to the Neolithisation of Epirus and its contacts with adjacent areas such as Albania and Italy. The presence of impressed pottery indicates cultural similarities between Epirus, the Ionian Islands (e.g. Sidari Corfu), Albania (Konispol Cave) and southern Italy. It can be assumed that networks of contact and exchange were developed between the herders and farmers across this large region. The location of the site in the landscape—in combination with data from other sites in Epirus—also supports a model whereby people actively chose to settle in or near wetland settings.