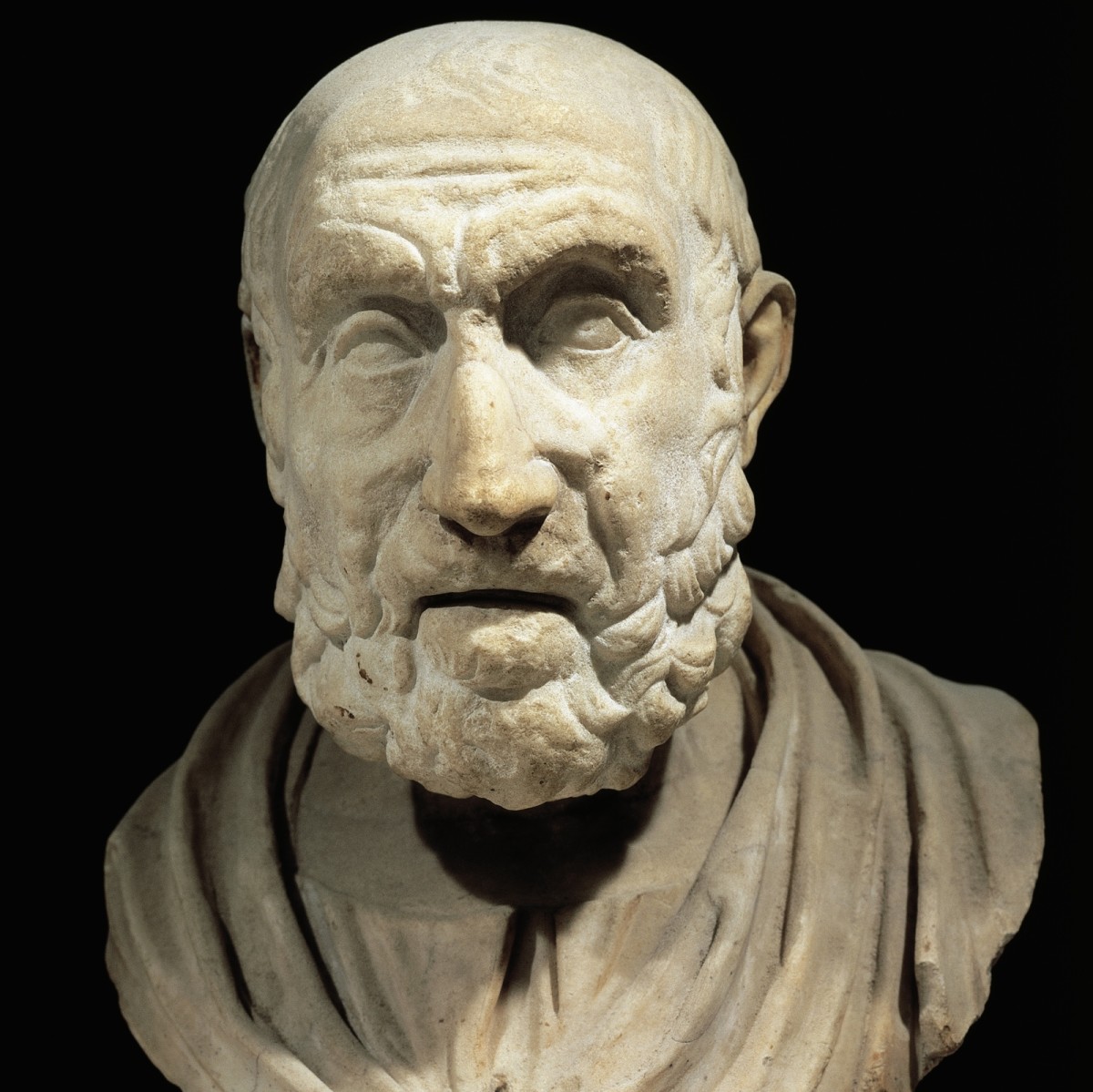 The roots of a rational approach to medicine, particularly to that of the objective observation by the bedside of the patient, are attributed to Hippocrates, a member of a family of well-known physicians on the island of Kos.
He lived and flourished in classical Greece (5th century). Among the scientific achievements of this period, the Hippocratic medicine developed the main concepts of the medical specialties. 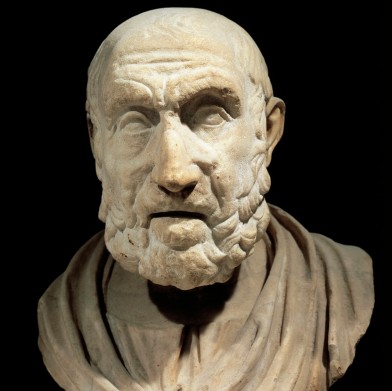 Some topics in Urology, such as uroscopy and stone disease, are presented here. The main references derived from the famous Hippocratic treatise entitled Aphorisms, an anthology of seven sections containing medical truths included in one or two phrases, like epigrams.

The most important healing methods are surgery (including the use of knife, lancet, and cautery), blood-letting, baths, drugs, ointments and plasters, fomentations and control of lifestyle (diet and exercise). There were no reliable anesthetics and antiseptic agents, making a surgical operation quite adventurous and painful, while physicians and patients agreed on the avoidance of this procedure. Historians often comment that Hippocratic medicine delayed the development of Urology by condemning the cutting of the bladder for a stone’s excision, but only the inexperience was condemned. On the contrary, the performance by the specialists was favored pre-announcing the future urological surgeons.

Urological contributions of the hippocratic collection

A detailed study of Corpus Hippocraticum reveals several disorders of the urinary tract. The observations concerning the anatomy and physiology of the related organs and the etiology and treatment of various urological diseases seem accurate. Furthermore, the theory of stone formation is still valid and the diagnostic interpretations of the macroscopic urine examination (uroscopy) are still respectful. It is emphasized that no other system or organ of the human body gives us so much diagnostic or prognostic information by its excretion as does the urinary tract: The urine must be observed to see how far it resembles that passed in health. The less it resembles healthy urine, the more diseased it is; the more it resembles it, the healthier it is. (Aphorisms VII, 67). The analysis of the urinary system in those times, where anatomic dissections were not allowed was rare and coincidental. The holistic approach combining information clinical observations from all organs added to the urologic experience and concluded to interpretations accepted until today.

Moreover, the reluctance of undertaking cutting of the stone by cystotomy seems as evidence of evaluating the dangers and preserving the principle primum non nocere (Epidemics I, 11). Hippocrates considered that the physician must have two special principles in mind, namely, to do good or to do not harm.

Some operations on the kidney were not avoided; pyonephrosis and renal abscess were considered as operable cases and drainage by deep loin incision was recommended. For many centuries, cystotomy tended to cause severe disability and even death. Some complications were also reported such as the leakage of urine, common also after incisions on other organs (bowel). The most severe complication of cystotomy seemed to
be gangrene and necrosis of the testis, due to the cut of the spermatic cord. The Hippocratic advice to the physicians was to avoid this procedure if possible, introducing the category of high risk operation, only for specialists, and attempting to protect the patients from untrained healers.

One of the most typical examples refers to the need for differentiating the upper from the lower urinary tract infection: Small fleshy objects, the shape of hairs, in the urine which is thick, mean there is a discharge from the kidneys (Aphorisms IV, 76) and when blood clots in the urine are accompanied by strangury, abdominal and perineal pain, it is the parts about the bladder which are affected (Aphorisms IV, 80). The astuteness of the objective clinical observations in times of deteriorated anatomic knowledge is impressive. Most of the anatomic passages of the Corpus seem to have been based on animal dissection or secret human dissection. It is noteworthy that Hippocrates baptized many of the urological terms and diseases, such as lithiasis (=stone disease), cystitis, cystotomy, nephritis, orchitis, strangury and many others.

The theory of renal stone formation

The Hippocratic concept of renal and bladder stone formation were based on detailed clinical observation and uroscopy. The possible ways of genesis of lithos (Greek word for stone) are described in several treatises of the Corpus. The presence of a sandy sediment or of stones in the urine means that originally tumors grew in relation to the aorta and suppurated. Then stones were squeezed out through the blood-vessels together with urine into the bladder (On the Nature of Man, 14).

In one of the treatises attributed directly to Hippocrates On Airs, Waters, and Places, a hygiene-oriented epidemiologic text, the qualities of water were considered responsible for stone formation. Drinking water collected from many different sources may be dangerous for stone disease, gravel and strangury: When two sorts of water are mixed they quarrel with one another and will leave sediment of sand and it is by drinking this that the diseases mentioned above are cause.

If the neck of the bladder becomes inflamed and does not allow the urine to pass the
densest and cloudiest part of urine is gathered together. The gravel formed coalesces to form a stone, preventing the urine from being passed. Great pain is thus caused.

A special mention for stone disease in childhood is notable, as it was unusual to focus on pediatric problems and, furthermore, to distinguish male and female children urological problems, based on the anatomic differences of the urethra.

Female children are less liable to stone because the urethra is short and wide and the urine is passed easily in males it is not straight and it is narrow as well. Moreover, girls drink more than boys (On Airs, Waters, Places, 9).

The patient’s age plays a main role in stone formation: Sedimentation after urination is more frequent in children. It is because they are warmer (Epidemics VI, part 3, 7) and sandy urinary sediment shows that a stone is forming in the bladder (Aphorisms IV, 79). For the treatment of lithiasis, fluid intake is recommended (wine mixed with abundant water) or stronger drugs.

The contribution of the Corpus to the development of uroscopy is priceless and his work on this field of Urology reflects the function not exclusively of the urinary system but of the whole body. Hippocrates studied the acute diseases and the evolution of urine during the stages of chronic diseases and emphasized on the constant appearance of certain elements in the urine. Colorless urine is bad; it is especially common in those with disease of the brain (Aphorisms IV, 72). The short phrase indicates a reduced ability to concentrate the urine and may refer to chronic renal failure or to diabetes insipidus (the latter unknown in 5th century BC).

The sudden appearance of blood in the urine indicates that a small renal vessel has burst (Aphorisms IV, 78). It may signify necrotizing renal papillitis due to ischemic necrosis. Bubbles appearing on the surface of the urine indicate disease of the kidneys and a prolonged illness (Aphorisms VII, 34). It may refer to chronic inflammatory activity in the glomeruli and may be identified with the term chronic glomerulonephritis.

(Source: ” “I will not cut, even for the stone”: origins of urology in the hippocratic collection “, by E. Poulakou-Rebelakou et al.) 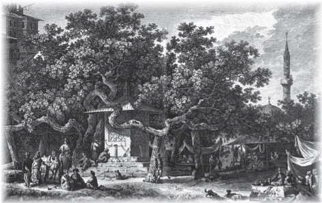