This post is mostly a photographic presentation of monuments from Gwalior Fort, Gwalior, Madhya Pradesh, India.

Gwalior district is one of the 52 districts of Madhya Pradesh state in central India. The historic city of Gwalior is its administrative headquarters. Other cities and towns in this district are Antari, Bhitarwar, Bilaua, Dabra, Morar Cantonment, Pichhore, and Tekanpur. 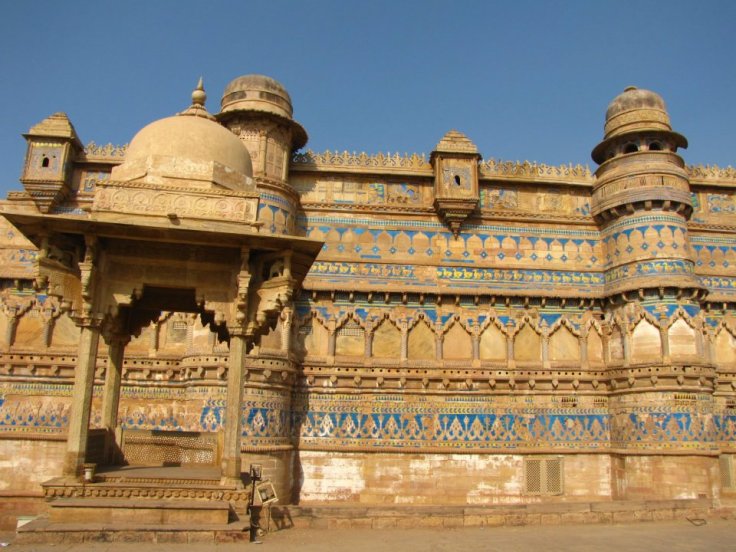 Gwalior is a major city in the central Indian state of Madhya Pradesh and one of the Counter-magnet cities. The city and its fortress have been ruled by several historic northern Indian kingdoms. From the Kachchhapaghatas in the 10th century, Tomars in the 13th century, it was passed on to the Mughal Empire, then to the Maratha in 1754, followed by the Scindia in the 18th century.

Gwalior Fort is a hill fort near Gwalior, Madhya Pradesh, central India. The fort has existed at least since the 10th century, and the inscriptions and monuments found within what is now the fort campus indicate that it may have existed as early as the beginning of the 6th century. The fort has been controlled by a number of different rulers in its history.

Siddhachal Jain Temple Caves were built in 7th to 15th century. There are eleven Jain temples inside Gwalior fort dedicated to the Jain Tirthankaras. On the southern side are 21 temples cut into the rock with intricately carved of the tirthankaras. Tallest Idol is image of Rishabhanatha or Adinatha, the 1st Tirthankara, is 58 feet 4 inches (17.78 m) high.

The entire area of Gwalior fort is divided into five groups namely Urvahi, North West, North East, South West and the South East areas. In the Urvahi area 24 idols of Tirthankar in the padmasana posture, 40 in the kayotsarga posture and around 840 idols carved on the walls and pillars are present. The largest idol is a 58 feet 4 inches high idol of Adinatha outside the Urvahi gate and a 35 feet high idol of Suparshvanatha in the Padmasana in Paththar-ki bavadi (stone tank) area.

There are around 1500 idols on the Gopachal Hill, which includes the size from 6 inch to 57 feet in height. All the idols are carved by cutting the hilly rocks (rock carving) and are very artistic. Most of the idols were built in 1341-1479, during the period of King Dungar Singh and Keerti Singh of Tomar dynasty.

The Teli ka Mandir is a Hindu temple built by the Pratihara emperor Mihira Bhoja.

It is the oldest part of the fort and has a blend of south and north Indian architectural styles. Within the rectangular structure is a shrine with no pillared pavilions (mandapa) and a South Indian barrel-vaulted roof on top. It has a masonry tower in the North Indian Nagari architectural style with a barrel vaulted roof 25 metres (82 ft) in height. The niches in the outer walls once housed statues but now have chandrashalas (horseshoe arches) ventilator openings in the north Indian style. The chandrashala has been compared to the trefoil, a honeycomb design with a series of receding pointed arches within an arch. The entrance door has a torana or archway with sculpted images of river goddesses, romantic couples, foliation decoration and a Garuda. The vertical bands on either side of the door are decorated in a simple fashion with figures that are now badly damaged. Above the door are a small grouping of discs representing the finial (damalaka) of a Shikhara. The temple was originally dedicated to Vishnu, destroyed during a Muslim invasion, restored into a Shiva temple by installing a linga while keeping the Vaishnava motifs such as the Garuda.

Close to the Teli ka Mandir temple is the Garuda monument, dedicated to Vishnu, is the highest in the fort. It has a mixture of Muslim and Indian architecture. The word Teli comes from the Hindu word Taali a bell used in worship.

The Sas-Bahu Temple was built in 1092-93 by the Kachchhapaghata dynasty. Dedicated to Vishnu, it is pyramidal in shape, built of red sandstone with several stories of beams and pillars but no arches.

The Man mandir palace was built by the King of Tomar Dynasty – Maharaja Man Singh in 15th century for his favorite queen, Mrignayani. Man Mandir is often referred as a Painted Palace because the painted effect of the Man Mandir Palace is due to the use of styled tiles of turquoise, green and yellow used extensively in a geometric pattern.

The Hathi Pol gate (or Hathiya Paur), located on the southeast, leads to the Man mandir palace. It is the last of a series of seven gates.

The Karan mahal is another significant monument at Gwalior Fort. The Karn mahal was built by the second king of the Tomar dynasty, Kirti Singh.

The Vikram mahal (also known as the Vikram mandir, as it once hosted a temple of Shiva) was built by Vikramaditya Singh, the elder son of Maharaja Mansingh.

This chhatri (cupola or domed shaped pavilion) was built as a memorial to Bhim Singh Rana (1707-1756), a ruler of Gohad state. It was built by his successor, Chhatra Singh. Bhim Singh occupied Gwalior fort in 1740 when the Mughal Satrap, Ali Khan, surrendered. In 1754, Bhim Singh built a bhimtal (a lake) as a monument at the fort.

The Gujari Mahal now a museum, was built by Raja Man Singh Tomar for his wife Mrignayani, a Gujar princess.