Usurpation in Late Antiquity took diverse forms, ranging from emperors being declared enemies of the state to rebellious generals. Nonetheless, usurpation constituted a political problem, not only a military one, because the claimant wanted to be recognized as a legitimate ruler and acted as such.

The opposition between an emperor and his rival for the title of Augustus had been a political matter since its genesis. Once such usurpers were suppressed, the legitimate emperors continued a propaganda war against their defeated opponents. Late imperial coinage celebrated the successes over the usurpers through depictions of the goddess Victoria promoting the triumph of the emperor. Monuments were another medium of representation for a legitimate ruler.The Senate built an arch at the foot of the Palatine to commemorate Constantine’s victory against Maxentius at the Milvian Bridge; Theodosius I. decided to erect an obelisk on the central spina of the hippodrome at Constantinople in order to celebrate his victory against the usurper Magnus Maximus. Finally, public ceremonies indicated the return of peace after the usurper’s defeat.

In view of these various “imperial” manifestations, sharing an intent to reaffirm the emperor’s legitimacy, a question arises: what did the law say? The war of a legitimate emperor against a usurper continued on an administrative and legal level. A usurper used the same legal forms as a legitimate ruler, because he usurparet imperium.

Consequently, usurpation created a fracture in the legal order because emperors, after defeating their rivals, removed the effects that the usurpations had produced. The condemnation of a usurpation to oblivion was carried out with legal instruments. For the period that runs from Constantine to Theodosius II, imperial constitutions are the most vital witnesses of the actions taken by the emperors. On the one side, in public law, emperors professed to be restoring the status quo ante; in particular, they tended to order that enactments issued under the usurper should be nullified (rescissio actorum). On the other side, they tended to confirm all private legal acts which had been enacted during the time of “tyranny”, because the danger of collapse in social and economic relationships had to be avoided.

Even if different points of view emerge from public and from private law, imperial statutes show a consistent image of what constituted a legitimate ruler.

Removal of a rival generally forced emperors and their administration to review the enactments that the usurper had issued. The question is not simple, as in some cases a usurper may have exercised power for a long period and over an extensive area.

Constantine, to use an important example, had to solve such a situation after defeating Licinius, who had been Augustus for more that fifteen years. Constantine branded him a tyrannus—a term which defines a political enemy but also a usurper—in order to recast his own conquest of the East as a restoration of liberty and the rule of law.

The vacuum that was potentially created by the deletion of Licinius’ laws was filled by the constitutions of Constantine, who connected his own legislation to the ancient law (ius vetus), thus creating a continuation of the legal order.

The link between the emperor and ancient law (vetus ius), stressed in Codex Theodosiani (CTh) 15.14.1, was already expressed in an earlier constitution that Constantine issued in an analogous situation in 313, namely the overthrow of Maxentius. The arrival of Constantine in Rome was followed by a widespread promotion of his person, which had to counteract the city’s preference for his rival. Constantine characterized his opponent as a tyrant, providing, at the same time, a revealing self-portrait in the role of liberator urbis.

In CTh. 15.14.1, Constantine referred to the “tyrant” Licinius’s enactments, leges and constitutiones. In the statute about Maxentius, the same oblivion was imposed on the imperial rescripts, i.e. the answers to petitions, that the usurper had pronounced “against the law” (contra ius).

However, the acts of Maxentius were not abolished in their entirety, for Constantine ordered that the lawful rescripts were not to be challenged. It is important to focus on this decision, because the lawful rescripts received their validity not only because they complied with the ius vetus, but also because Constantine forbade opposition against them. The constitution thus points to an implied evaluation of what valid law is. Even if the usurper as illegitimate legislator has no competence to make law, and his acts must therefore be abolished, some of his rescripts may be granted existence because the legitimate emperor gives them a new life in the world of the law. The criterion that allows these rescripts to retain their validity is their adherence to the ius vetus. In other words, the non-existence of the usurper’s acts can be overcome by the connection between the ius vetus and the legitimate emperor; the former exists independently, the latter is the guarantor of the body of law in its entirety.

The sources show that the discourse linking the emperor and the ius found expression in various ways, even though in terms of semantics and ideology the range was quite narrow. The virtue of justice in the legitimate ruler is more intensely denoted as opposed to the iniquity of the usurper.

The broad circulation of the edicts allowed the emperors to build a common and loyal consent to imperial authority among the population of the empire. The need for approval became more pressing when emperors had to support their legitimacy at the end of a political crisis.

Erasing the usurper’s actions in terms of public law, such as by abolishing constitutions or rescripts and removing officials who had collaborated with the tyrant, was bound to have severe repercussions. At the same time, however, emperors chose to confirm the validity of transactions by private citizens during the period of usurpation. During the reign of a usurper, people evidently concluded contracts, manumitted slaves, and litigated in the courts. In order to avoid the chaos resulting from cancelling all legal actions, emperors tried to mitigate the consequences of the damnatio memoriae by preserving the stability of the law.

Honorius renewed the decision of his predecessor Valentinian (CTh. 15.14.8), and accepted that the intention of releasing someone from slavery was legally sufficient if it was independent from the negative and illegal authority of a tyrannus. When, on the contrary, manumissions were affected by the pernicious influence of the usurper, he ordered that the masters had to repeat the acts.

The respect of people’s liberty in performing legal acts comes to light in another constitution of Honorius, dated about eighteen years before CTh. 15.14.13 to 21 April 395.

Addressed to Andromachus, praefectus urbis, this imperial enactment concerns the usurper Eugenius. Honorius preserved the effects of the legal acts performed by citizens during the usurpation. The emperor tried to cover all private law, and the constitution implied a very good knowledge of the praetorian edict, as the references of many of its institutions show. The long list of legal acts ends with a general provision. The emperor recognized the validity of all acts that had not been indicated in the list and that were embodied in a private agreement (omnia, quae in placitum sunt deducta privatum), provided that they had not been concluded dolo or vi.

The constitution then resolved the problem of the formality of the acts that was the result of deleting in the documents the names of the consuls appointed by the tyrannus. The nomen consulis was a necessary requirement for an act to be legally valid, and its importance is clearly evoked by John Chrysostom. Yet, in the present case, the emperor decreed that the omission of the consuls’ names did not invalidate the contracts and all the other private regulations. Using a fictio, he denied that the praescriptio was able to invalidate these agreements, which the authority of the legislator confirmed.

From a political and ideological point of view, the constitution clearly states that there was a time of the usurper (tyrannicis temporibus / scaevis temporibus / tempora infausta), but that now the time of justice is back. Honorius wanted to erase the time of usurpation, tempus vero ipsum, ac si non fuerit, aestimetur: the time of usurpation must be considered as having never existed, as if no usurpation had ever occurred. However, asserting that the time of the usurpation had never existed threatened the certainty and the stability of relations between the individuals. For this, the emperor gave effect to all private acts, and he based this solution on his power, which was legitimately exercised. The emperor presents himself as the only one able to guarantee the existence and effectiveness of all the actions taken by the citizens during the time of usurpation. The repetition of the verb valeat stresses that the emperor assures the serenity and the prosperity of the empire and safeguards peace among the citizens.

Honorius’ validation of private acts answers to the need to secure the trust of his subjects in imperial power and to strengthen the period of peace after the conflict with the usurper. By doing this, he protects the principle of legal certainty, because the law is certain when the subjects can predict the consequences of their conduct and see the effects of their legal action maintained over time. This principle of law, adopted in the Roman legal system, is a constant in the political programme of all the emperors.

Constantine and Theodosius emphasized that they restored the law, while the usurper was turned into the personification of the absence of any kind of order and justice. In addition, Valentinian and Honorius claimed that they were guardians of the stability of the rules by recognizing the validity of the legal acts of private citizens while they were subject to the power of the tyrannus.

This account traced the connection between emperors and law, which characterized all legal experience in Late Antiquity. The power of issuing enactments was not simply a prerogative of the emperor, but became one of the essential features of his persona. In Late Antique imperial ideology the emperor was not only the source of the law but the law itself.

The ideological system that the emperors manipulated to obtain the subjects’ consensus survived also during usurpations, a period where rival claims of succession in the imperial power shook the routine of the empire’s life. After the removal of the defeated enemy, the language of power, through imperial constitutions, aimed to convince all inhabitants of the empire that the triumph of the emperor restored the rule of law, which had been lost under the “tyranny” of the opponent. Legislation, connected to the communicative framework of the imperial regime, promoted in a very effective way the image of an emperor as legum dominus Romanorum, iustitiae aequitatis rector*.

*[the owner of the laws of the Romans, Justice guide]

(Source: “The Value of the Stability of the Law: A Perspective on the Role of the Emperor in Political Crises”, by Francesco Bono. Taken from the collective work “The Impact of Justice on the Roman Empire – Proceedings of the Thirteenth Workshop of the International Network Impact of Empire (Gent, June 21–24, 2017),  Edited by Olivier Hekster & Koenraad Verboven) 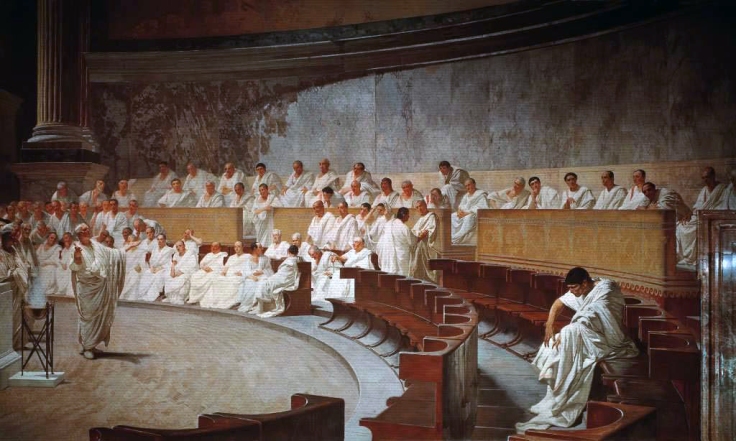