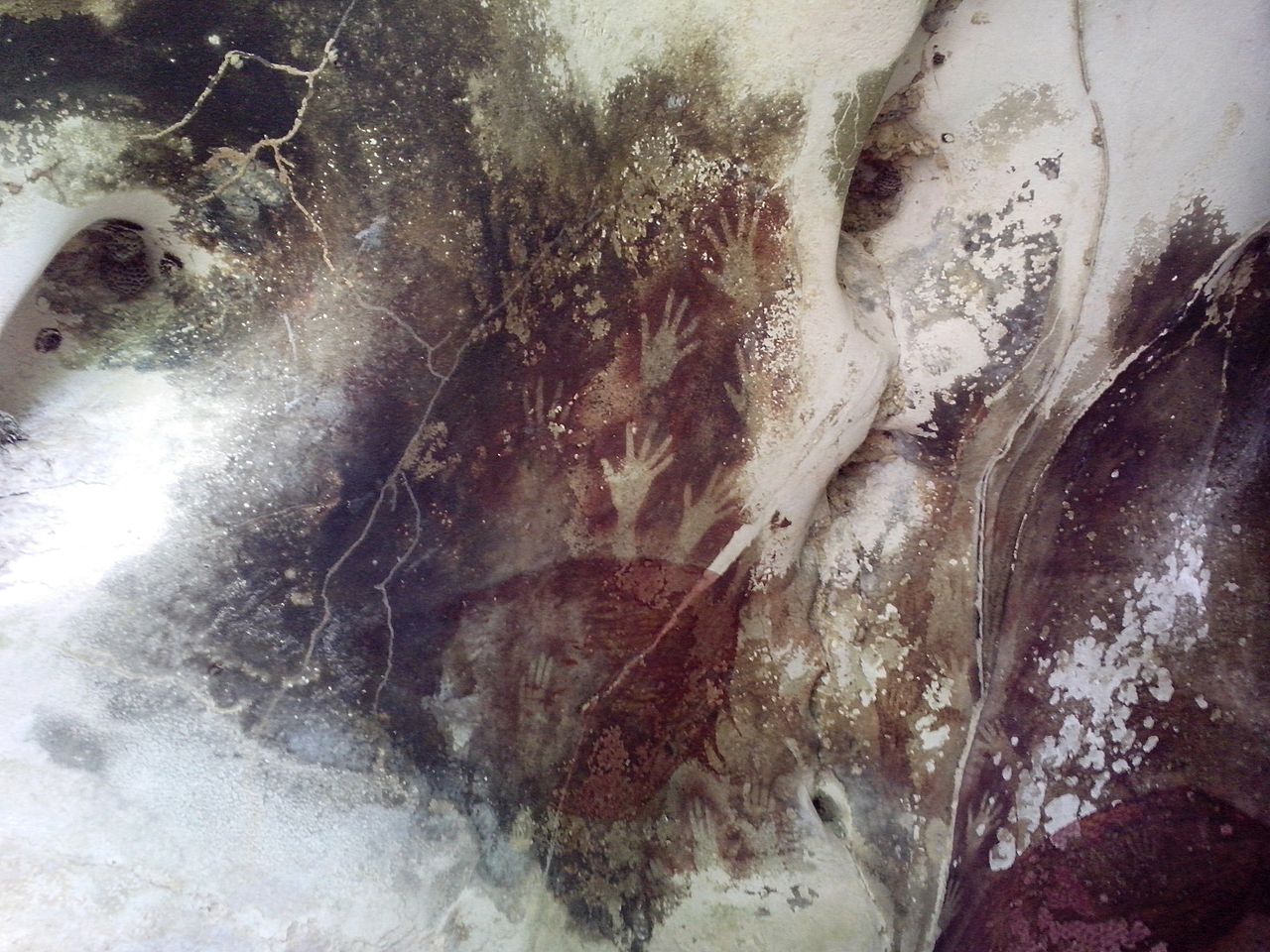 Sulawesi is the world’s eleventh largest island and the biggest and probably oldest in Wallacea, the zone of oceanic islands between continental Asia and Australia.

Extensive networks of footcaves formed around the tower bases and now harbor abundant evidence of prehistoric human occupation. Cemented breccia banks containing archaeological material occur on the rear walls of many caves and rockshelters and at least 90 rock art sites are recorded.

The Maros-Pangkep rock art was first recorded in the 1950s and has been extensively studied by Indonesian researchers, although few detailed reports are published. On the basis of superimposition, two broad periods of prehistoric art production are defined. The earliest of these is characterized by human hand stencils (made by spraying wet pigment around hands pressed against rock surfaces) and, less commonly, large naturalistic paintings of endemic Sulawesi land mammals, including the dwarfed bovid anoa (Anoa sp.), Celebes warty pig (Sus celebensis) and the ‘pig-deer’ babirusa (Babyrousa sp.). These wild animal species are most commonly depicted in profile as irregularly infilled outlines. 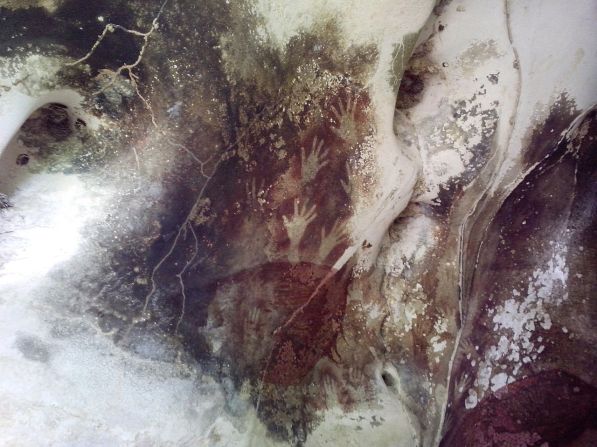 The later rock art phase in the Maros-Pangkep karsts lacks images of this nature. It is instead typified by small depictions of zoomorphs (including dogs and other domesticated species), anthropomorphs, and a wide range of geometric signs, most commonly drawn onto rock surfaces using black pigment (possibly charcoal). This art can plausibly be attributed to early Austronesian immigrants on the basis of stylistic elements, and is thus a few thousand years old at most.

The red- and mulberry-coloured motifs of the earlier phase typically occur on high roofs, elevated parts of rock walls or other difficult-to-access areas in caves and shelters. They are located both close to site entrances and within deep, dark chambers and passages. In most cases the art is poorly preserved, surviving only as weathered patches of pigment on exfoliated rock surfaces.

To determine the age of the earliest rock art in the Maros karsts we undertook an extensive program of uranium-series dating of coralloid speleothems directly associated with the motifs. The sampled materials all comprise static coralloids that formed directly on top of clearly discernable motifs, offering the possibility to obtain minimum ages for the underlying rock art. In some cases, hand stencils and paintings were made over coralloids that then continued to grow, providing an opportunity to obtain both minimum and maximum ages for the art.

Minimum ages for the Maros rock art motifs (n = 14) span the time range between 39.9 and 17.4 kyr ago, with the majority dating to more than 25 kyr ago. The oldest dated motif is a hand stencil from Leang Timpuseng, which has a minimum age of 39.9 kyr, and now represents the earliest evidence for humans on Sulawesi, as well as the oldest known example of this widespread art form. This motif is located on a 4-m high ceiling next to a large irregularly infilled painting of a female babirusa, which has a minimum age of 35.4 kyr. At nearby Leang Barugayya 2, a large painting of an indeterminate animal (probably a pig) has a minimum age of 35.7 kyr. The next oldest motif in our assemblage is another hand stencil at Leang Jarie, which dates to at least 39.4 kyr ago.

At Gua Jing, we dated two distinct hand stencils, one of which yielded minimum and maximum ages of 22.9 and 27.2 kyr, respectively. Thus, given that the Leang Timpuseng hand stencil has a minimum age of 39.9 kyr, we can infer the existence in the Maros karsts of an artistic culture with a duration of at least ~13 kyr.

The discovery of rock art dating back at least 40 kyr ago on Sulawesi has important implications for the debate about the origins of Palaeolithic rock art per se, which is invariably dominated by European data and for which there are two widely debated models. The first of these is that rock art originated in Europe and developed gradually over thousands of years, beginning with abstract, nonfigurative imagery (e.g., geometric patterns) and culminating in sophisticated naturalistic representations of animals, such as those in Altamira and Lascaux dated to ~20 kyr ago and other late Upper Palaeolithic cave sites in western Europe.

This long-standing notion is given new impetus by recent uranium-series dating of rock art motifs from 11 caves in northern Spain, which suggests that Europe’s earliest cave art was nonfigurative in nature and that animal paintings do not appear until considerably later. Currently, the oldest dated rock art motif in Europe (and the world) is from El Castillo, where a single thin calcite deposit overlying a red ‘disk’ yielded a minimum uranium-series age of 40.8 kyr. The alternative model is that cave art first appeared in Europe in fully developed form, as implied by the great antiquity of the elaborate animal paintings from Chauvet Cave in southern France. Although the early chronology for this art is disputed, the oldest animal image from Chauvet Cave is attributed an age of 32,410 ± 720 radiocarbon years BP (~35,000 calendar years BP) on the basis of 14C dating of charcoal pigment.

The earliest dated image from Maros, with a minimum age of 39.9 kyr, now represents the oldest known hand stencil in the world. In addition, a painting of a babirusa (‘pig-deer’) made at least 35.4 kyr ago is amongst the earliest dated figurative depictions worldwide, if not the earliest one. Among the implications, it can now be demonstrated that humans were producing rock art by ~40 kyr ago at opposite ends of the Pleistocene Eurasian world. 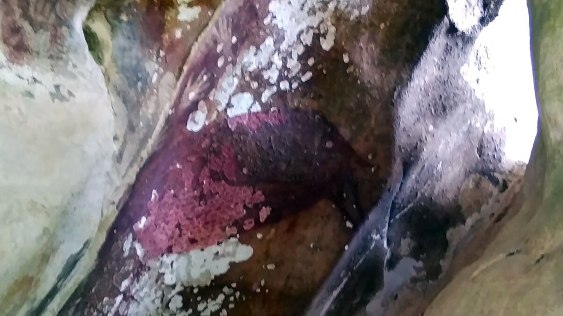