Arcadius died in A.D. 408, at the early age of thirty-one; his imperious consort had preceded him to the grave, and the empire of the East was left to Theodosius II., a child of seven years, their only son. There was hardly an instance in Roman history of a minor succeeding quietly to his father’s throne. An ambitious relative or a disloyal general had habitually supplanted the helpless heir. But the ministers of Arcadius were exceptionally virtuous or exceptionally destitute of ambition. The little emperor was duly crowned, and the administration of the East undertaken in his name by the able Anthemius, who held the office of Praetorian Praefect.

History relates nothing but good of this minister; he made a wise commercial treaty with the king of Persia; he repelled with ease a Hunnish invasion of Moesia; he built a flotilla on the Danube, where Roman warships had not been seen since the death of Valens, forty years before; he reorganized the corn supply of Constantinople; and did much to get back into order and cultivation the desolated north-western lands of the Balkan Peninsula, from which Alaric and his Visigothic hordes had now taken their final departure. The empire was still more indebted to him for bringing up the young Theodosius as an honest and god-fearing man. The palace under Anthemius’ rule was the school of the virtues: the lives of the emperor and his three sisters, Pulcheria, Arcadia, and Marina, were the model and the marvel of their subjects.

Theodosius inherited the piety and honesty of his grandfather and namesake, but was a youth of slender capacity, though he took some interest in literature, and was renowned for his beautiful penmanship. His eldest sister, Pulcheria, was the ruling spirit of the family, and possessed unlimited influence over him, though she was but two years his senior. When Anthemius died in 414 A.D., she took the title of Augusta, and assumed the regency of the East. Pulcheria was an extraordinary woman: on gathering up the reins of power she took a vow of chastity, and lived as a crowned nun for thirty-six years; her fear had been that, if she married, her husband might cherish ambitious schemes against her brother’s crown; she therefore kept single herself and persuaded her sisters to make a similar vow. Austere, indefatigable, and unselfish, she proved equal to ruling the realms of the East with success, though no woman had ever made the attempt before.

When Theodosius came of age he refused to remove his sister from power, and treated her as his colleague and following her advice he married in 421 A.D., the year that he came of age, the beautiful and accomplished Athenaïs, daughter of the philosopher Leontius. The emperor’s chosen spouse had been brought up as a pagan, but was converted before her marriage, and baptized by the name of Eudocia. She displayed her literary tastes in writing religious poetry, which had some merit, according to the critics of the succeeding age.

Theodosius’ long reign passed by in comparative quiet. Its only serious troubles were a short war with the Persians, and a longer one with Attila, the great king of the Huns, whose empire now stretched over all the lands north of the Black Sea and Danube, where the Goths had once dwelt. In this struggle the Roman armies were almost invariably unfortunate. The Huns ravaged the country as far as Adrianople and Philippopolis, and had to be bought off by the annual payment of 700 lbs. of gold. It is true that they fell on Theodosius while his main force was engaged on the Persian frontier, but the constant ill-success of the imperial generals seems to show that the armies of the East had never been properly reorganized since the military system of Theodosius I. had been broken up by the revolt of Gainas forty years before. His grandson had neither a trustworthy body of German auxiliaries nor a sufficiently large native levy of born subjects of the empire to protect his borders. 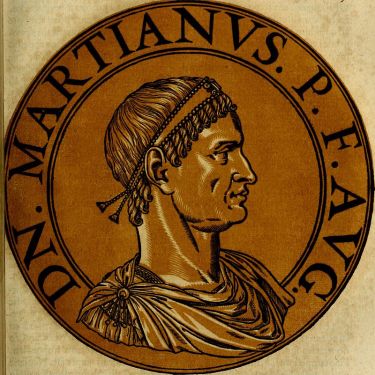 The reconstruction of the Roman military forces was reserved for the successors of Theodosius II. He himself was killed by a fall from his horse in 450 A.D., leaving an only daughter, who was married to her cousin Valentinian III., Emperor of the West. Theodosius, with great wisdom, had designated as his successor, not his young son-in-law, a cruel and profligate prince, but his sister Pulcheria, who at the same time ended her vow of celibacy and married Marcianus, a veteran soldier and a prominent member of the Senate. The marriage was but formal, for both were now well advanced in years: as a political expedient it was all that could be desired. The empire had peace and prosperity under their rule, and freed itself from the ignominious tribute to the Huns. Before Attila died in 452, he had met and been checked by the succours which Marcianus sent to the distressed Romans of the West. 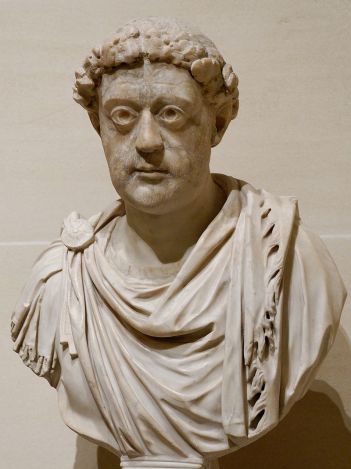 When Marcianus and Pulcheria passed away, the empire came into the hands of a series of three men of ability. They were all bred as high civil officials, not as generals; all ascended the throne at a ripe age; not one of them won his crown by arms, all were peaceably designated either by their predecessors, or by the Senate and army. These princes were Leo I. (457-474), Zeno (474-491), Anastasius (491-518). Their chief merit was that they guided the Roman Empire in the East safely through the stormy times which saw its extinction in the West. While, beyond the Adriatic, province after province was being lopped off and formed into a new Germanic kingdom, the emperors who reigned at Constantinople kept a tight grip on the Balkan Peninsula and on Asia, and succeeded in maintaining their realm absolutely intact.

Both East and West were equally exposed to the barbarian in the fifth century, and the difference of their fate came from the character of their rulers, not from the diversity of their political conditions. In the West, after the extinction of the house of Theodosius (455 A.D.), the emperors were ephemeral puppets, made and unmade by the generals of their armies, who were invariably Germans. The two Magistri militum, Ricimer and Gundovald —one Suabian, the other Burgundian by birth—deposed or slew no less than five of their nominal masters in seventeen years. In the East, on the other hand, it was the emperors who destroyed one after another the ambitious generals, who, by arms or intrigue, threatened their throne.

While this comparison bears witness to the personal ability of the three emperors who ruled at Constantinople between 457 and 518 A.D, it is only fair to remember they were greatly helped by the fact that the German element in their armies had never reached the pitch of power to which it had attained in the West; the suppression of Gainas forty years before had saved them from that danger. But unruly and aspiring generals were not wanting in the East; the greatest danger of Leo I was the conspiracy of the great Magister militum Aspar, whom he detected and slew when he was on the eve of rebelling. Zeno was once chased out of his capital by rebels, and twice vexed by dangerous risings in Asia Minor, but on each occasion he triumphed over his adversaries, and celebrated his victory by the execution of the leaders of the revolt. 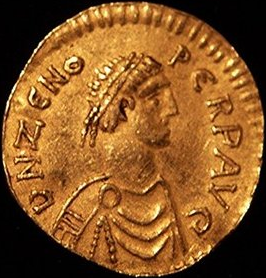 Anastasius was vexed for several years by the raids of a certain Count Vitalian, who ranged over the Thracian provinces with armies recruited from the barbarians beyond the Danube. But, in spite of all these rebellions, the empire was never in serious danger of sinking into disorder or breaking up, as the Western realm had done, into new un-Roman kingdoms. So far was it from this fate, that Anastasius left his successor, when he died in 518 A.D., a loyal army of 150,000 men, a treasure of 320,000 lbs. of gold, and an unbroken frontier to East and West.

The main secret of the success of the emperors of the fifth century in holding their own came from the fact that they had reorganized their armies, and filled them up with native troops in great numbers. Leo I. was the first ruler who utilized the military virtues of the Isaurians, or mountain populations of Southern Asia Minor. He added several regiments of them to the army of the East, but it was his son-in-law and successor, Zeno, himself an Isaurian born, who developed the scheme. He raised an imperial guard from his countrymen, and enlisted as many corps of them as could be raised; moreover, he formed regiments of Armenians and other inhabitants of the Roman frontier of the East, and handed over to his successor, Anastasius, an army in which the barbarian auxiliaries—now composed of Teutons and Huns in about equal numbers—were decidedly dominated by the native elements. 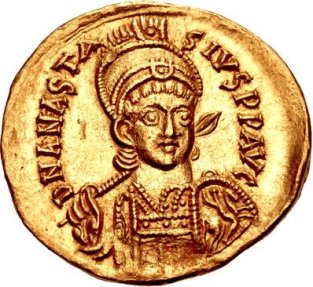