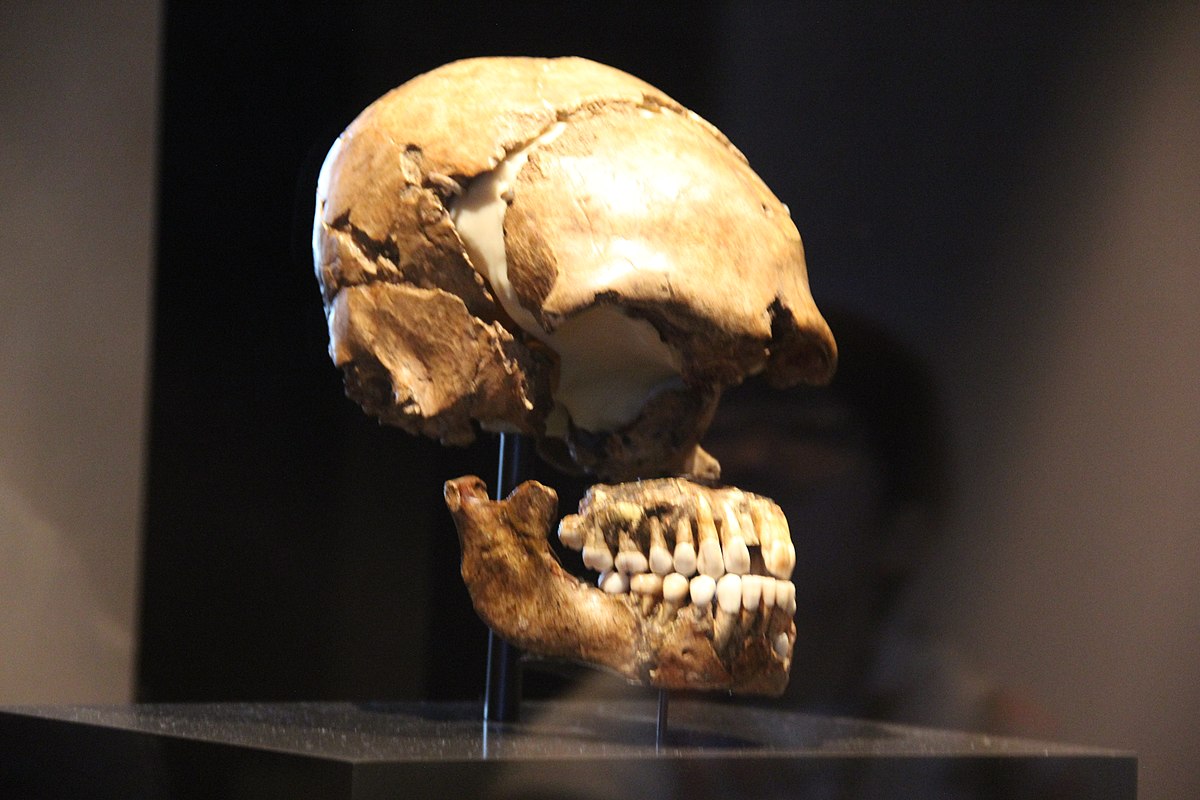 The timing of the Middle Pleistocene glacial-interglacial cycles and the feedback mechanisms between climatic shifts and earth-surface processes are still poorly understood. This is largely due to the fact that chronological data of sediment archives representing periglacial, but also potentially warmer climate periods, are very sparse until now. 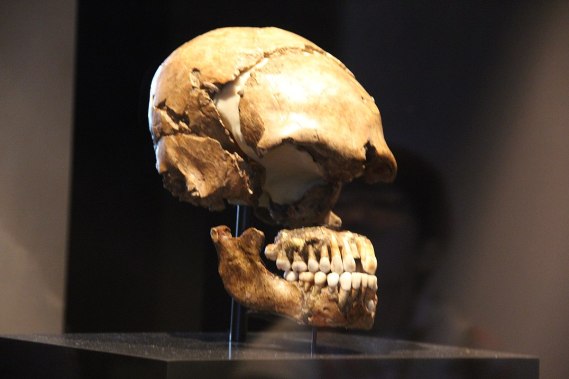 “The Quaternary sediments in central Germany are perfect archives to understand the climate shifts that occurred in the region during the last 450,000 years”, says co-author Tobias Lauer, a geochronologist at the Max Planck Institute for Evolutionary Anthropology. “This is because all sediments representing the ice advances and retreats of Scandinavian glaciers into Europe are preserved here.” The sediments in the region, and especially in the area around the city Leipzig, are extremely well documented due to tens of thousands of drillings over the past few decades and open pits related to brown-coal mining.

Especially relevant are the river deposits of local rivers like the Weisse Elster and the Saale, which are preserved between the moraines of the so-called “Elsterian” and “Saalian” ice advances. “Especially the timing of the first major glaciation has been highly debated within the scientific community during the last few decades”, says Lauer. “By dating the river deposits systematically we found that the first ice coverage of central Germany during the Elsterian glaciation (named after the river Elster) occurred during marine isotope stage 12, likely about 450,000 years ago, which is 100,000 years earlier than previously thought.” To obtain these dates the researchers used luminescence dating, a technology that determines how long ago mineral grains were last exposed to sunlight or heat.

Tools from the Paleolithic

The river deposits also contain Lower- and Middle Paleolithic stone artefacts yielding important information on early human dispersal in central Europe. “The first traces of human Lower Paleolithic occupation in the area date back to about 400,000 years and are connected most probably to the interglacial period following the first major glaciation”, says co-author Marcel Weiss, an archeologist at the Leipzig Max Planck Institute. “These traces are evidenced by more than 6,000 Lower Paleolithic stone artefacts that had been recovered from the gravel pits of Wallendorf and Schladebach in Saxony-Anhalt, Germany.”

Middle Paleolithic stone artefacts from the same region are correlated with river deposits dated between 300,000 and 200,000 years ago and are associated with Neanderthals. The Pleistocene river gravel deposits from the top of the sequence in the former brown-coal mine Zwenkau, which is located south of Leipzig in Saxony, yielded the oldest Middle Paleolithic artefacts. This artefact inventory, the stone tool assemblage of “Eythra”, is known for its numerous handaxes and dates back to about 280,000 years ago.

The youngest sediments from which the researchers obtained the new dates belong to the so-called Saalian glaciation (named after the river Saale). The southernmost ice advance of Scandinavian glaciers into Central Germany occurred about 150,000 years ago.

“Our dates will have a major impact on the understanding of the timing of glacial cycles and climatic shifts of ice-age Europe”, say the authors. “The first major glaciation had a huge impact on the environment and re-modeled the entire landscape. The newly determined ages of the Lower and Middle Paleolithic artefacts will help us in the future to reconstruct the ways in which humans populated or re-populated central Germany and central Europe following this major climatic impact.”

The new data will also enable scientists to look further into questions regarding the ways humans adapted and reacted to the climatic shifts between cold glacials and warm interglacials during the Middle Pleistocene between roughly 450.000 to 150.000 years ago. 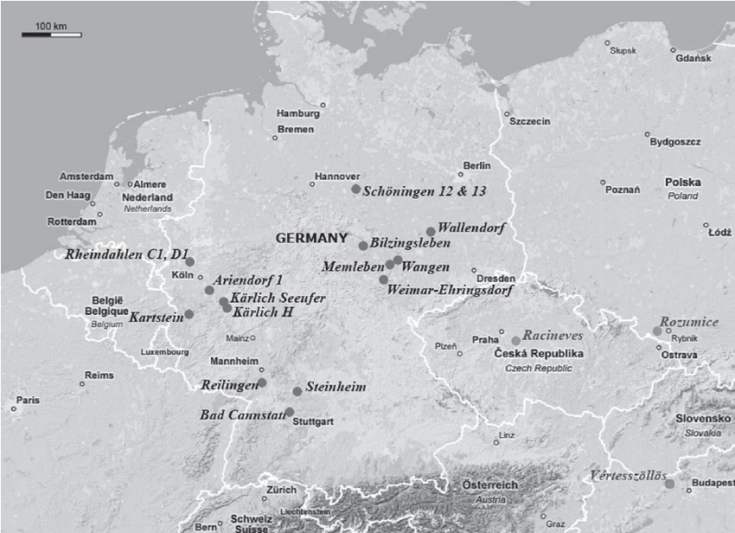 Now let’s have a look at selected parts of the publication itself:

Abstract By establishing a luminescence-based chronology for fluvial deposits preserved between the Elsterian- and Saalian tills in central Germany, we obtained information on the timing of both the Middle Pleistocene glacial cycles and early human appearance in central Europe. The luminescence ages illustrate different climatic driven fluvial aggradation periods during the Saalian glacial cycle spanning from 400–150 ka. The ages of sediments directly overlying the Elsterian till are approximately 400 ka and prove that the first extensive Fennoscandian ice sheet extension during the Quaternary correlates with MIS 12 and not with MIS 10. Furthermore, the 400 ka old fluvial units contain Lower Paleolithic stone artefacts that document the first human appearance in the region. In addition, we demonstrate that early MIS 8 is a potential date for the onset of the Middle Paleolithic in central Germany, as Middle Paleolithic stone artefacts are correlated with fluvial units deposited between 300 ka and 200 ka. However, the bulk of Middle Paleolithic sites date to MIS 7 in the region. The fluvial units preserved directly under the till of the southernmost Saalian ice yield an age of about 150 ka, and enable a correlation of the Drenthe stage to late MIS 6.

Introduction The timing of the Middle Pleistocene glacial-interglacial cycles and the feedback mechanisms between climatic shifts and earth-surface processes are still poorly understood. This is largely due to a lack of dating results of sediments representing the advance and retreat of Middle Pleistocene ice sheets, as well as periglacial, interglacial or interstadial environments.

During most of the Saalian glacial cycle central Europe was characterized by periglacial environmental conditions. Chronological data of sediment archives representing periglacial but also potentially warmer Saalian climate periods are very sparse until now. Therefore, there is a lack of knowledge about the response of sedimentary systems to climatic shifts during the Saalian period.

A better understanding of Middle Pleistocene palaeoenvironmental changes is also of high relevance for the understanding of human dispersal into central Europe, as well as the timing of technological changes within the archaeological record. The Middle Pleistocene is the time period from which we start to have major archaeological evidence for human presence together with the emergence of the Middle Paleolithic in central Europe. Therefore, the oldest traces of human appearance in central Germany post-date the Elsterian glaciation. Whether this first glaciation eroded traces of prior human occupation, or whether the Baltic flint transported to large parts of the central European lowlands attracted humans as a high quality raw material source, remains an open question. Nevertheless, the age of the Elsterian glaciation is crucial for our understanding of when humans (re-)populated the European lowlands. Additionally, a higher resolution dating of the time period between the Elsterian and Saalian glaciations may help to understand when and under which palaeoenvironmental conditions the transition from the Lower to the Middle Paleolithic occurred in the study area.

The most suitable area to investigate the above questions is the type area for the Elsterian- and Saalian glacial cycles, located in central Germany (Saxony, Saxony-Anhalt and Thuringia). This is where the gravel deposits of the rivers Saale- and Elster intertwine with tills and meltwater deposits of both glacial cycles in proximity to the maximum extensions of the Fennoscandian ice sheets in Central Europe. To obtain chronological data for the timing of the Elsterian- and Saalian glacial cycles, we used feldspar luminescence dating stimulating the feldspar-luminescence signal at elevated temperatures.

Discussion and Conclusion The first hominin occupation of Europe and the human dispersal is discussed in several studies, however evidence for the presence of sites older than 250 ka in central Europe is relatively sparse. The Schladebach/Wallendorf site, directly dated in the present study to MIS 11 or early MIS 10, adds an important data point to the ongoing debate about the human occupation and dispersal into central Europe.

Another important site potentially attributed to the MIS 11 interglacial in central Germany is the Thuringian travertine site of Bilzingsleben. Although the anthropogenic origin of the majority of the artefacts has recently been questioned, human cranial remains prove the presence of humans in Bilzingsleben.

We provide evidence here that Wallendorf/Schladebach, with more than 6700 stone artefacts, confirms the presence of humans in central Germany around MIS 11 and/or early MIS 10. These humans had a Lower Paleolithic stone tool industry, with few MP features (e.g. prepared cores) at that time.

Schöningen in Lower Saxony is the next younger Lower Paleolithic site confirming human presence in central Germany during the MIS 9 interglacial.

Like in Schladebach/Wallendorf, the stone artefacts from Schöningen are attributed to the (late) Lower Paleolithic: prepared cores are not present, the tools and the blank production is based on rather thick and broad flakes and, although evidence for bifacial shaping is present, handaxes themselves are missing.

There are only a few sites that have layers correlated with MIS 8, and there is little evidence for human presence during the MIS 8 Pleniglacial. The majority of the early MP sites in Europe are in fact associated with MIS 7.

Considering this European evidence, an MIS 7 age for the occurrence of the fully developed MP in central Germany is more likely. The hypothesis is reinforced by the Thuringian travertine site Weimar-Ehringsdorf. Several attempts have dated the formation of the travertine in Weimar-Ehringsdorf to MIS 7. The artefact assemblage found in several layers within the travertine of Weimar-Ehringsdorf is attributed to the Middle Paleolithic. Importantly, several of the human skeletal remains have Neanderthal features86. The clearly identified Neanderthal features of the human remains indicate that with the emergence of the fully developed MP during MIS 8 (?) – MIS 7 in central Germany, the Neanderthal lineage was linked to this stone tool industry.

During the MIS 6 cold stage, we have evidence from the upper find layer of Markkleeberg that humans adapted to the cold stage environment and were present in central Germany shortly before the major Saalian ice advance around 150 ka.

The Lower Paleolithic human presence started in MIS 11 and lasted until about MIS 9.

With regard to the dates from sites like Markkleeberg and Ehringsdorf, we can infer that the bulk of MP sites dates to the beginning of MIS 7 in central Germany, at the latest.

The age of the upper find horizon in Markkleeberg is suggestive of human presence during the cold phases of MIS 6.

(Source: “Timing of the Saalian- and Elsterian glacial cycles and the implications for Middle – Pleistocene hominin presence in central Europe”, by Tobias Lauer & Marcel Weiss, 2018) 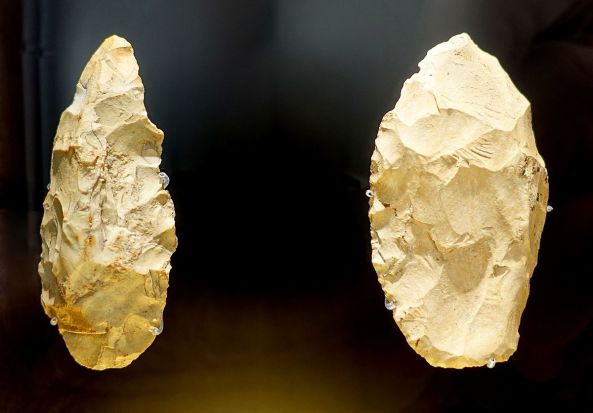