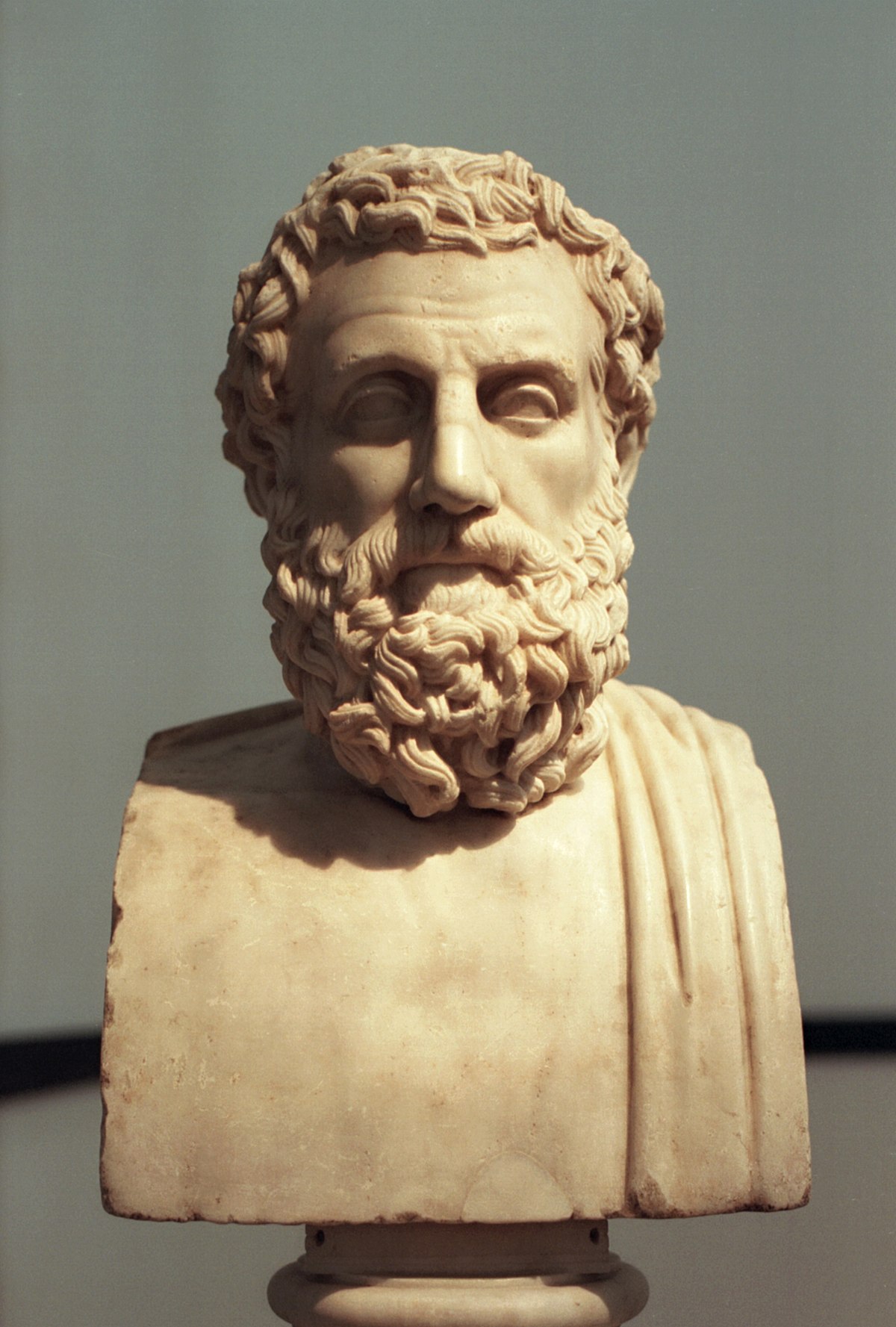 In this post we present and analyze selected excerpts from Aeschylus‘ tragedy, “Persians“.

Before proceeding in our analysis, we must bring to your knowledge some important information about this ancient author.

Aeschylus, born in Eleusis, Attica, was one of the initiated into the Eleusinian Mysteries, whose members were sworn, under the penalty of death, not to reveal anything about the Mysteries to non-initiates. Nevertheless, according to Aristotle, Aeschylus was accused of revealing some of the cult’s secrets on stage. Some sources claim that an angry mob tried to kill Aeschylus on the spot, but he fled the scene. Heracleides of Pontus asserts that the audience tried to stone Aeschylus.

The author himself claims that his writings are “crumbs from the great table of Homer”. Our study has shown that this is indeed the case. Aeschylus writes ‘in the way of Homer’. And as Homer (and Hesiod) used organized older sources (i.e. from the “Museums”) to write his works, the same seems to be valid for Aeschylus. Moreover, the fact that he belonged to the initiated in the Eleusinian Mysteries, i.e. to a spiritual elite of his era that had access to Knowledge that the common Man didn’t, adds weight to the information we can collect from his works. With this in mind let us now proceed.

As usual, our analysis is aided by the Liddell & Scott Lexicon. 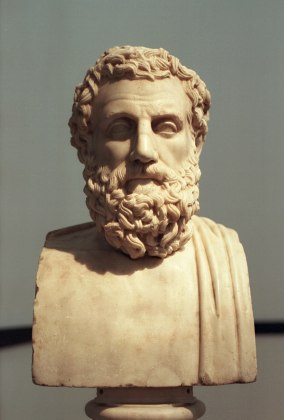 English: Others still the mighty, fecund Nile sent forth—Susiscanes, Pegastagon of Egyptian lineage, mighty Arsames, lord of sacred Memphis Ariomardus, governor of world-old Thebes, and the rangers of the fens, rowers of ships, well-skilled, and in multitude past all numbering.

[NovoScriptorium: The translation of the word “ὠγύγιος” as “world-old” -even though it was often used in this way during Classical Greece- could be  misleading. As we have explained, “ὠγύγιος” refers to a period near, before or after, the ‘Cataclysm of Ogygos’, at unknown times deep in Antiquity. It also appears to be linked to ‘the epoch of the gods’. Hence, if what the ancient Tradtion believed is valid, then the Egyptian Thebes must have been inhabited for thousands of years before Aeschylus’ era]

English: The folk that wields the scimitar follows from every part of Asia at the dread mandates of the King.

[NovoScriptorium: Here we learn that the expedition against Greece was a ‘Pan-Asiatic‘ one, even though the declaration “from every part of Asia” does sound as an exaggeration]

English: For by the will of the gods Fate hath held sway since ancient days, and hath enjoined upon the Persians the pursuit of war that levels ramparts low, the mellay of embattled steeds, and the storming of cities.

[NovoScriptorium: What is interesting here is that indeed the Persians, for more than a thousand years, were indeed warlike, raising countless wars against many (Greeks, Romans and Egyptians among them). It is also interesting to note the strong belief to the will of the Divine. A will that appoints to everyone, individual or nation, a part/role in the great plan for this world (“μοῖρα” means “share”/”piece”)]

English: I have been ever haunted by many a dream at night since my son, having fitted forth his armament, departed hence with intent to lay waste the land of the Ionians. But never yet have I beheld so distinct a vision as yesternight. I will describe it unto thee. I dreamed that two women in fair vesture, one apparelled in Persian garb, the other in Dorian attire, appeared before mine eyes; both in stature far more striking than are the women of our time, in beauty flawless, sisters of the self-same race. As for the country wherein they dwelt, to one had been assigned by lot the land of Hellas, to the other that of the barbarians. The twain, to my fancy, seemed to provoke each other to a mutual feud;

[NovoScriptorium: Aeschylus here uses the Persian Queen-Mother, Atossa, to bring forth some very interesting claims. Persians and Greeks were initially of the same genous, “κασιγνήτα γένους” as it is written. The word “κασίγνητος” means ‘brother’/’born of the same mother’. The reference to ‘Dorian‘ clothing, at the time of the lot, may refer to a certain historical period. For many ancient Greek Philosophers, anything ‘Dorian’ was considered older (and better) than e.g. Ionian, Aeolian. Important note though: this does not cover all Greek History, but instead refers to the Greek tribes after the ‘Cataclysm of Deucalion’, not earlier. Δώρος (Doros) was the son of Ἕλλην (Hellen) and Ὀρσηΐς (Orseïs) the nymph, grandson of Δευκαλίων (Deucalion) and Πύρρα (Pyrrha). The patriarch/initiator of the Dorians, according to the myth, lived two generations after this specific ‘Cataclysm’. Hence, what we are informed of here is that after this great upset, people from the Aegean and the Greek peninsula moved (for whatever reason) towards Asia, where Persia was, and established a new ‘home’ there. For further reading on what the ancient Tradition claimed about ‘Cataclysms’, please see here]

English: Alas! In sooth a mighty sea of troubles has burst upon the Persians and the entire barbarian race.

[NovoScriptorium: Aeschylus here separates the Persians from the ‘other barbarians’]

English: O sovereign Zeus, now indeed that thou hast destroyed the armament of the high-vaunting and multitudinous Persians, thou hast shrouded in the gloom of grief the city of Susa and of Agbatana!

[NovoScriptorium: Here Aeschylus uses the Persian Chorus to inform us that the Persians believed in Zeus]

English: Ye holy divinities of the nether world, Earth and Hermes, and thou, Lord of the dead, send forth to the light the spirit from below;

[NovoScriptorium: The exact translation of “ψυχή” is “soul” (psyche) rather than “spirit”. Here Aeschylus describes an ‘invocation ceremony’ of Darius’ soul from the Underworld. He uses the Persian Chorus to inform us that the Persians believed in Hermes and Gê, among other deities. It is important to note the belief in the existence of the soul and, moreover, to the ‘unique soul’, thus rejecting the various ‘reincarnation’ theories – Aeschylus surely follows Homer on this]

English: O Earth, and ye other rulers of them that dwell in the nether world, vouchsafe, I implore, that the glorious spirit, the god of the Persians, whom Susa bore, may quit his abode.

[NovoScriptorium: Aeschylus uses here the Persian Chorus to inform us that Darius, the former King of the Persians, was honoured as a deity. We have discussed multiple times in previous posts that this was a general practice among the ancient peoples. It was a very ancient custom to ‘deify’ benefactors, heroes or great leaders. Please note that the exact translation of the word “θεομήστωρ” is “one whose will is equal to the will of the gods”]

English: Therefore a calamity most evil and past all forgetting has been wrought by him to its accomplishment; a calamity such as never yet befell this city of Susa to its desolation since our Lord Zeus first ordained this high estate that one ruler should bear sway over all Asia with its flocks and wield the sceptre of its government. For Medus was first to be the leader of its host; and another, his son, completed his work since his soul obeyed the direction of wise thoughts. Third, after him, Cyrus, blest in his fortune, came to the throne and stablished peace for all his people. The Lydians and Phrygians he won to his rule, and the whole of Ionia he subdued by force; for the gods hated him not, since he was right-minded. Fourth in succession, the son of Cyrus ruled the host. Fifth in the list, Mardus came to power, a disgrace to his native land and to the ancient throne; but he was slain in his palace by the guile of gallant Artaphrenes, with the help of friends whose part this was. [Sixth came Maraphis, and seventh Artaphrenes.] And I in turn attained the lot I craved, and many a campaign I made with a goodly host

English: The impetuous lord of populous Asia is driving his wondrous warrior-flock against the whole earth in twofold armament, on foot and by the sea, resting his confidence in his stalwart and stern commanders; he himself, the peer of the gods, a hero whose race is sprung from gold.

[NovoScriptorium: Aeschylus uses here the ghost of Darius to inform us, again, that the Persians believed in Zeus. That Zeus ordained that Asia will be ruled by one ruler (Empire instead of nation-states or city-states). History of Man confirms that Asia indeed saw many different Empires and that this was certainly the most wide-spread form of governance in the continent. According to the second excerpt, it appears that Asia had always been the most populous continent.

“χρυσογόνου γενεᾶς ἰσόθεος φώς” demands a closer look. “ἰσόθεος φώς” means “a man who is equal to the gods”. It is a phrase used very often by Homer, too. Many great heroes and leaders were characterized as such. We have already explained, in previous posts,  what ‘the gods’ really were. Hence, this is just another way to state that the various old deities were earlier humans, ‘deified after death’. Homer even writes it directly, quite a few times, that some of the heroes/leaders were honoured as ‘gods’ in the demos while they were still alive.

Let us now examine the phrase “χρυσογόνου γενεᾶς”. Literally, the phrase means “of a generation/lineage whose genous was golden”. This refers to the myth of Perseus. Perseus was the son of Zeus and Danaë, the daughter of Acrisius, King of Argos. Disappointed by his lack of luck in having a son, Acrisius consulted the oracle at Delphi, who warned him that he would one day be killed by his daughter’s son. In order to keep Danaë childless, Acrisius imprisoned her in a bronze chamber, open to the sky, in the courtyard of his palace. Zeus came to her in the form of a shower of gold, and impregnated her. Soon after, their child was born; Perseus.

Hence, undoubtedly, what is clearly stated here is that Perseus had been the initiator of the Persian genous. Combining what we discussed earlier above, this events took place -if they ever did- some generations after the ‘Cataclysm of Deucalion’ and not during the ‘historical era’.

Moreover, we learn that the first one to form an Empire in Asia was Medus; But who was he?

Medus was the son of Medea. His father is generally agreed to be Aegeas, although Hesiod states that Jason fathered him and Chiron raised him:

“And she was subject to Iason, shepherd of the people, and bare a son Medeus whom Cheiron the son of Philyra brought up in the mountains.”

Medus was driven from Athens to Colchis with his mother. Medea’s father Aeetes was the former king of Colchis, and Aeetes’s brother Perses ruled after his death.

“(The Medes) were formerly called by everyone Arians, but when the Colchian woman Medea came from Athens to the Arians, they changed their name, like they [the Persians] did. This is the Medes’ own account of themselves.”

In other words, what we learn here is that both Medes and Persians had a strong relation with the Aegean region and the Greek peninsula. The possible historical core of the myth may suggest a very ancient expansion of Aegeans towards Asia – one of the many different ones described in various texts. As it seems, the Aegeans did not substitute the indigenous populations; they only became their leaders/leading class. There is a great number of such references in the ancient Greek literature long before the ‘Imperial’ Hellenistic or Roman years. Reading all the above, it may also be suggested that peoples of the Aegean, the Eastern Mediterranean and Anatolia had close bonds, in blood and culture, which dated back very deep in Antiquity. Official archaeological evidence adequately supports such a theory]

(Source for the Ancient Greek text) 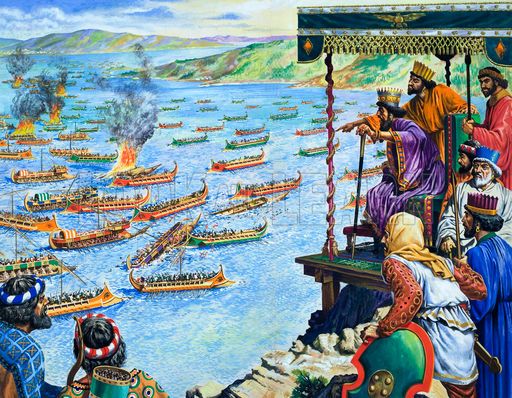