“It would be best of all if the Greeks never made war on each other, but regarded it as the highest favour in the gift of the gods could they speak ever with one heart and voice, and marching arm in arm like men fording a river, repel barbarian invaders and unite in preserving themselves and their cities. And if such a union is indeed unattainable as a whole, I would counsel you at the present moment at least to agree together and to take due precautions for your safety, in view of the vast armaments now in the field and the greatness of this war in the west. For it is evident even to those of us who give but scanty attention to affairs of state, that whether the Carthaginians beat the Romans or the Romans the Carthaginians in this war, it is not in the least likely that the victors will be content with the sovereignty of Italy and Sicily, but they are sure to come here and extend their ambitions beyond the bounds of justice. Therefore I implore you all to secure yourselves against this danger, and I address myself especially to King Philip. For you, Sire, the best security is, instead of exhausting the Greeks and making them an easy prey to the invader, on the contrary to take thought for them as for your own body, and to attend to the safety of every province of Greece as if it were part and parcel of your own dominions. For if such be your policy the Greeks will bear you affection and render sure help to you in case of attack, while foreigners will be less disposed to plot against your throne, impressed as they will be by the loyalty of the Greeks to you. If you desire a field of action, turn to the west and keep your eyes on the war in Italy, so that, wisely biding your time, you may some day at the proper moment compete for the sovereignty of the world. And the present times are by no means such as to exclude any hope of the kind. But defer your differences with the Greeks and your wars here until you have repose enough for such matters, and give your whole attention now to the more urgent question, so that the power may still be yours of making war or peace with them at your pleasure. For if once you wait for these clouds that loom in the west to settle on Greece, I very much fear lest we may all of us find these truces and wars and games at which we now play, so rudely interrupted that we shall be fain to pray to the gods to give us still the power of fighting with each other and making peace when we will, the power, in a word, of deciding our differences for ourselves.”

Agelaus by this speech made all the allies disposed for peace and especially Philip, as the words in which he addressed him accorded well with his present inclination. So that they came to an agreement on all the points of detail, and after ratifying the peace the conference broke up, each carrying back to his home peace instead of war.

It was at this time and at this conference that the affairs of Greece, Italy, and Africa were first brought into contact. For Philip and the leading statesmen of Greece ceased henceforth, in making war and peace with each other, to base their action on events in Greece, but the eyes of all were turned to the issues in Italy. And very soon the same thing happened to the islanders and the inhabitants of Asia Minor. For those who had grievances against Philip and some of the adversaries of Attalus no longer turned to the south and east, to Antiochus and Ptolemy, but henceforth looked to the west, some sending embassies to Carthage and others to Rome, and the Romans also sending embassies to the Greeks, afraid as they were of Philip’s venturesome character and guarding themselves against an attack by him now they were in difficulties. 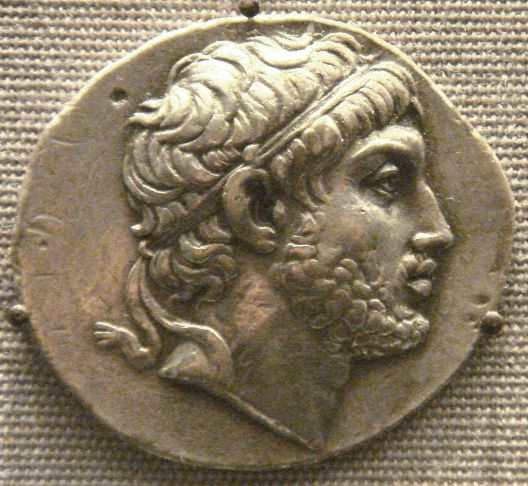 One thought on “The Peace of Naupactus (217 BC) – The speech of Agelaus of Naupactus to Philip V, King of Macedonia”