During the winter (Note: of 216 B.C.) Philip took into consideration that for his enterprise he would require ships and crews to man them, not it is true with the idea of fighting at sea for he never thought he would be capable of offering battle to the Roman fleet but to transport his troops, land where he wished, and take the enemy by surprise. Therefore, as he thought the Illyrian shipwrights were the best, he decided to build a hundred galleys, being almost the first king of Macedonia who had taken such a step. Having equipped these fleets he collected his forces at the beginning of summer and, after training the Macedonians a little in rowing, set sail. It was just at the time that Antiochus crossed the Taurus, when Philip sailing through the Euripus and round Cape Malea reached the neighbourhood of Cephallenia and Leucas, where he moored and awaited anxiously news of the Roman fleet. Hearing that they were lying off Lilybaeum, he was encouraged to put to sea again and advanced sailing towards Apollonia.

Just as he was approaching the mouth of the river Aoiis, which runs past Apollonia, his fleet was seized by a panic such as sometimes overtakes land forces. For some of the galleys in the rear, which had anchored off an island called Sason lying at the entrance to the Ionian Sea, came in the night and informed Philip that some vessels which had crossed from the Sicilian Strait had anchored in the same roadstead and announced to them that they had left at Rhegium some Roman quinqueremes which were on their voyage to Apollonia to join Scerdilaidas*. Philip, in the belief that the Roman fleet would be upon him in less than no time, was seized by fear, and at once weighed anchor and gave orders to sail back. Quitting his anchorage and making the return voyage in thorough disorder he reached Cephallenia on the second day, travelling continuously by day and night. Plucking up a little courage he remained there pretending that he had returned to undertake some operations in the Peloponnese. As it turned out, the whole had been a false alarm. For Scerdilaidas, hearing that Philip had been building a considerable number of galleys in the winter and expecting him to arrive by sea, sent to inform the Romans and beg for help, upon which the Romans sent a squadron of ten ships from their fleet at Lilybaeum, these being the ships that had been sighted off Rhegium. Had Philip not taken alarm so absurdly and fled before this squadron, now was the opportunity for him to make himself master of Illyria, the whole attention and all the resources of the Romans being concentrated on Hannibal and the situation after the battle of Cannae; and most probably the ships would have fallen into his hands also. But as it was the news upset him so much, that he made his way back to Macedonia without suffering any loss indeed but that of prestige.

*Scerdilaidas was the king of Illyrians at the time 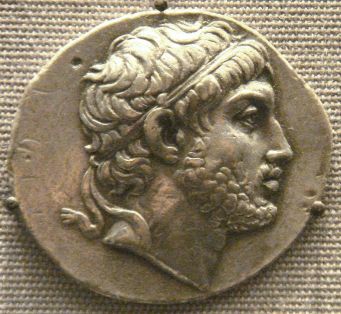