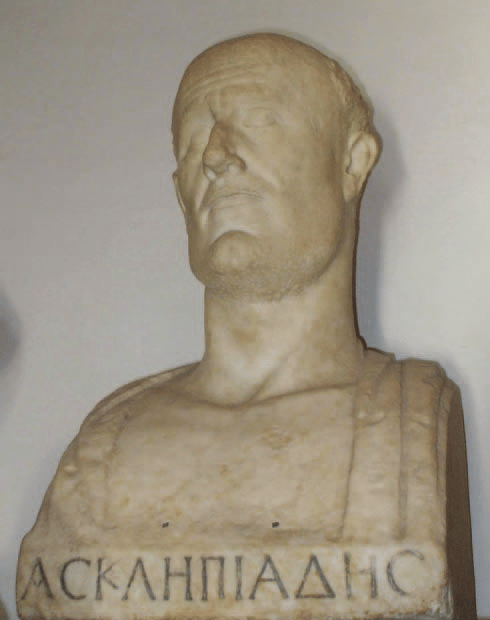 Asclepiades was born in Prousias (also called Cius), a Greek seaside port in Bithynia, the northwest region of Asia Minor. His father Andreas was also a physician. There are reports that as a young practitioner Asclepiades visited Pergamon and Parium in Asia Minor. He was further educated in medicine at the famous Medical School of the Museum in Alexandria and in philosophy at the Epicurean School in Athens, called ‘Keepos’ (Κῆπος meaning garden). Asclepiades refused the enticing offer to serve as official physician of Mithridates Eupator, the king of Pontus who was interested in medicine and natural science in general. Instead, he moved to Rome at the age of around 30 years, where he first taught philosophy and later on practiced medicine. Asclepiades must have been proficient both in philosophy and in medicine as his contemporaries Antiochus of Ascalon and Cicero, a Greek Platonic philosopher and a Roman Stoic philosopher respectively, attest admirably.

Influenced by the Epicurean philosophy, Asclepiades rejected the Hippocratic doctrines of four elements and humors as well as the benevolent Nature axiom. He adhered to atomic theory, chance and evolution, insisting that “Nature does not look after living organisms”. He warned that in most cases if proper care is not provided by a physician the condition of a patient will deteriorate. He suggested that the human body is composed of a) molecules (μέρη, ‘meree’ or ‘corpuscula’) that are made of atoms (ἄναρμοι ὄγκοι, ‘anarmoi ongoi’), and b) void spaces (πόροι, ‘poroi’). According to Asclepiades, diseases are caused by alteration of form, position or free flow of a patient’s molecules; thus, he introduced molecular stereopathology. In order to restore health status, he favored mild therapeutic methods such as a healthy diet, exposure to light, hydrotherapy, massage, physical exercise, although he also employed herbal remedies and surgery if judged appropriate. He was named Philosophicus because of his knowledge of philosophy and Pharmacion because of his knowledge of medicinal herbs, such as his favorite chamomile.

Another characteristic of Asclepiades was the friendly support of patients. His sympathetic consideration for the feelings and comfort of his patients was in great contrast with the infamous callousness of physicians of his era. His motto was “treat the patient swiftly, harmlessly and pleasantly”. In order to offer treatment as painless and pleasing as possible to his patients he even recommended the use of wine in some cases. He maintained that “a physician who respects his profession has a few patients because he attends them very closely”. He advocated the equal treatment of women because most diseases are common to both genders. Asclepiades was a pioneer in the humane treatment of patients with mental disorders. He freed insane persons from confinement in the dark and treated them using labor and music therapy, in addition to healthy diet and massages.

He was the first physician who introduced the highly important division of diseases in acute and chronic ones. Freed by the misconception of a benevolent Nature and influenced by one of the principal sayings of Epicurus regarding pains (“those that are acute are more intense, while those that are lasting are milder”), Asclepiades recognized that some diseases have a short duration, while others are incurable. He realized that the physician has to act swiftly in order to have an opportunity to cure the acute diseases, while the best thing to do in incurable chronic diseases is to comfort the patients. Asclepiades, who charged Hippocratic physicians preceding him with having being “concerned with death instead of life”, was the first to study chronic diseases systematically. It was only after him that the cure of chronic diseases rather than the cure of acute ones became the outstanding accomplishment of doctors.

The humane and naturalistic approach of the Bithynian physician, as well as his medical skills gave him a great reputation in Rome. He wrote many medical works but none remains and his views are known by other writers. Interestingly, the book ‘Precepts’ (Παραγγελίαι), which is oddly included in the Hippocratic Corpus, contains so many of Asclepiades’ ideas that either he or one of his early students is probably the author. It contains references to acute and chronic diseases, proper medical practice with sympathy, caring and friendliness toward patients. The book begins with the dictum that “healing is a matter of time, but sometimes also is a matter of opportunity”. It bases medical practice “not on theories but on experience combined with reason” underlining Zeno the Sidonian’s pragmatic approach based on observation and inference by means of signs. It includes several Epicurean terms and views, including the concept of sense-perception, the consideration of patients’ pleasure, and the avoidance of physicians’ flamboyant pretense. Most importantly, it contains the Epicurean motive of ‘philia’ (φιλία, friendship or friendly love) for compassion to patients: “For where there is love of human, there is also love of the art” (Ἤν γάρ παρῆ φιλανθρωπίη πάρεστι καί φιλοτεχνίη). Last but not least, the Greek text contains latinisms, indicating that the author spoke Latin and lived in Roman era.

Scattered information, recorded by various writers, reveals that Asclepiades was an extraordinary man. He was the first physician who performed an elective non-emergency tracheotomy, according to Galen and Aretaeus. Once, according to Pliny the Elder, in a passing funeral procession Asclepiades noticed that the presumed dead person was not really deceased and he ‘revived’ him (saved him) to the amazement of everybody around. Probably his is the impressive theory that in stagnant waters there are “invisible tiny animals” (microbes!), which if inhaled may cause disease, recorded by his contemporary Roman Marcus Terentius Varro.

Asclepiades died in Rome at an advanced age according to Pliny the Elder. His influence lasted for about half a millennium through the Methodic School of Medicine, which was established by his students. The name of the School is derived from Greek ‘methodos’ (μέθοδος), which implies a systematic line of scientific investigation. Accordingly, Methodic Medicine was based on atomic theory and was free of metaphysical ideas.

Among many famous Methodic physicians are Asclepiades’ Greek students Themison (c.100-20 BCE) and Titus Aufidius of Sicily (c.90-10 BCE). The latter wrote a book, which was later translated into Latin by the Roman Cornelius Celsus under the title ‘De Re Medica’ and became one of the most popular medical texts until the 19th century. The Greek physician Antonius Musa notably cured the emperor Augustus of typhoid fever with cold baths. A probable explanation of the successful treatment is that by decelerating the reproduction of the microbial agent in a cold environment, the Methodic physician gave the opportunity to his patient’s immune system to combat the disease. Other famous followers of Asclepiadian medicine include Thessalus of Tralles, the official physician of emperor Nero (1st century CE), Soranus of Ephesus, who is considered the father of Gynecology, Obstetrics and Neonatology (early 2nd century CE) and Caelius Aurelianus of Numedia (early 5th century CE). It is worth mentioning that in his surviving Greek texts, Soranus refers several times to Asclepiades and other Methodic physicians. Most importantly, he also once mentions Zeno the Epicurean together with the philosopher Aristotle and once, elsewhere, Phaedrus together with the philosopher Empedocles. Phaedrus, probably a close friend of his contemporary Asclepiades, was another famous Epicurean who taught philosophy in Rome for many years according to Cicero and returned to Athens after 86 BCE. It is tempting to assume that Soranus knew the views of Epicureans Zeno of Sidon and Phaedrus from references in the works of Asclepiades. After all, the Bithynian physician was greatly influenced by his teacher Zeno in treating his patients with sympathy and kindness.

Most of the contributions of the Bithynian physician were forgotten for about 15 centuries, except very few such as the division of diseases into acute and chronic ones.

Then, some of the basic ideas of Asclepiades were rediscovered by modern Science. In the 19th century, Dalton proved that the atomic theory was indeed true and Pasteur showed that microbes may cause disease. In the 20th century, it became apparent that all diseases have a molecular basis. The structure of DNA provided a biochemical model of life at its first level of organization initiating the era of molecular biology. Medicine entered its molecular phase, too, in the past decades. No self-respecting physician or life scientist believes in the incorporeal healing powers of a benevolent Nature any-more. Psychological support of patients is currently considered a necessary component of medical conduct. Patients with mental disorders are now respected and treated with music and labor therapy, in addition to appropriate drugs. There are even recent reports that massage may have a beneficial effect in reducing physical symptoms of pain and anxiety in patients of cancer. And yet, Asclepiades of Bithynia still remains widely unknown.

The great Hippocrates of Kos laid the basic foundations of medical practice and ethics. The brilliant Asclepiades of Bithynia offered a more realistic and humane refinement of the medical art in ways that only recently have been appreciated. It is time that Asclepiades be recognized for his contributions as the father of molecular medicine and take his rightful place as a pioneer physician next to Hippocrates, the justly recognized father of clinical medicine.

(Source: “Hippocrates of Kos, the Father of Clinical Medicine, and Asclepiades of Bithynia, the Father of Molecular Medicine”, by Christos Yapijakis, 2009)

2 thoughts on “Asclepiades of Bithynia (124-40 BCE); the Father of Molecular Medicine”