Our knowledge about the very beginnings of the Early Neolithic is very limited; one or two sites can be ascribed to this period: Vlusha in the south-central part of Albania, and Konispol on the southwest coast.

A vertical sequential stratigraphy has been found only in the Konispol Cave, while at the open site at Vlusha there is only horizontal stratigraphy present.

On the other hand, the Podgorie site has yielded quite good stratigraphical and archaeological evidence to confirm a late stage of the Early Neolithic which resulted from migration.

The archaeology of the Early Neolithic in Albania shows that the culture of this period developed in three chronological phases.

Vlusha is a site where Mesolithic and Early Neolithic deposits were found in two different areas of the site, Vidhëz (point A) and Armenina (point B), approx. 300m apart. The site lies on a mountain slope 800m above sea level, on the right bank of the Kapinova River, near the eponymous village in the district of Skrapar.

The excavations at Vlusha revealed that there were two distinct cultural horizons, of which the layer at point A (Vidhëz-Vlusha I) had no pottery, but is securely dated to an earlier period, i.e. the Mesolithic, while the layer at point B (Armenina-Vlusha II) dates to an early phase of the Neolithic. However, this aspect requires further investigation, as Vlusha is indeed a site with great potential for studying the process of Neolithisation of this area, given that the earliest Neolithic layer here, Vlusha II, follows directly after the Mesolithic layer, Vlusha I.

The material culture of both occupation horizons at Armenina (Vlusha II) is represented by some flint tools of micro-dimensional silexes and monochrome ware produced with modest technology, highly fragile and poorly fired. It has a dark grey sandy clay fabric, and in a few cases reddish or ochre colouring. Coarse ware of fabric with medium-sized grains predominates, while pottery with a coarser grained fabric is less frequent. The pottery is highly fragmented and contains few diagnostic elements. Spherical and semi-spherical cups predominate, along with conical bowls, generally with a flat base, which in a few cases appear to have small tubular handles, particularly in the case of the coarser fabric ware.

Decoration is rarely present and consists of impressed lines placed around the neck or just below it, mainly observed on the coarser fabric ware. Impresso and barbotine style decorations are entirely absent. The excavated area in this sector, except for a few flint tools, produced no tools of polished stone or bone.

The material culture is particularly striking because of the presence of micro-dimensional silexes, some of which are similar in shape and retouch style to Mesolithic microliths found during the excavations at Vidhëz.

The general characteristics of the pottery at Vlusha do not correspond to any of the Neolithic cultures known so far in Albania, which makes the cultural and chronological evaluation of this material complex, especially as the material is limited in quantity and has no clear stratigraphic provenance. However, the monochrome pottery, its poor firing quality, the simplicity of the shapes, and the limited and uniform decoration indicate that this material represents a new cultural phenomenon that cannot be chronologically associated with a classic phase of the Early Neolithic period. In this sense, it is interesting that in the layer that contained pottery finds, some microliths are similar to those found at site B (Vidhëz). Thus, we believe that the locality of Vlusha was occupied during both the Mesolithic and Early Neolithic.

The closest analogies (both in forms and decoration) to the dark grey coloured monochrome pottery of Vlusha IIa were found at the settlement of Krainici in the Struma valley in Southwest Bulgaria. The decoration on the pottery from both settlements consists only of plastic ornamentation.

These similarities provide indications of the cultural and chronological affiliation of Vlusha with the wider Aegean-Balkan region, as well as connecting the Neolithisation process of this area to that of the Aegean regions.

Since excavations at this site remain limited, future investigations are required to fully clarify the picture. The strong Mesolithic tradition supports the idea that pre-Neolithic groups were involved in the Neolithisation of the region. On the other hand, the presence of coarse monochrome pottery, known from some other Early Neolithic sites in the Southern Balkans, seems to indicate that the first farmers arrived in this part of Albania through the first wave of Neolithisation, known as ‘Monochrome’ Neolithic. It appears that two different populations lived together at this settlement, the indigenous groups and the newcomers, undergoing processes of assimilation and integration.

The Konispol cave is located in the southern extreme of Albania in the lime formation of the Saraçin Mountains, 400m above sea level, near the Ionian Sea. There, Early Neolithic Impresso pottery appears immediately above the Mesolithic layer.

The Konispol cave is the settlement where the first compact layer of Mesolithic culture in Albania was discovered, lying immediately above an Upper Palaeolithic layer.

The Mesolithic tools are of high-quality flint, predominantly red and brown, and with fine, high-quality retouch. They comprise of small geometric microlithic tools, mainly triangular or trapezoidal scrapers with a fine single blade or terminal retouch, or dogtooth blades with a fine single or bifacial retouch. The lithic industry was accompanied by faunal finds, including wild goat (Capra ibex). With regard to the technical and morphological aspects, the microlithic finds at Konispol II are similar to those at Vlusha. There are also parallels with finds from several Mesolithic sites in the Balkans, such as the cave at Odmut in Montenegro and the Francthi cave (phase VIII), despite the small differences in the dimensions of the compared microliths. Further analogies can be found between Konsipol II and Mesolithic Sidar on Corfu.

This stratigraphic sequence is of particular interest for the interdisciplinary study of the Neolithisation process in the south-western region of Albania. According to the excavators, the Early Neolithic phase at Konispol is represented by pottery that, although of limited quantity, is significant in determining the chronological and cultural character of the deposit in which it was found. It is mostly of coarser fabric, made of a mixture of clay and fine sand and very well fired. Light slip appears to have been applied to some of the dishes, while others have a smoothed surface. Red and reddish brown are the predominant colours, while dark grey is also observed in a few cases. Depending on the intensity of firing, the background colour of some fragments appears to have double nuances. Typologically, the Early Neolithic pottery at Konispol was not very varied. The most common types of vessels are cups with a straight or slightly inward curved rim, a rare type of cup with a conical trunk, and dishes with a body which gradually narrows towards the neck. The Konispol IIIa vessels mostly do not have handles.

The Impresso pottery connects layer Konispol IIIa with the much wider area of the Early Neolithic Adriatic complex. The ceramic assemblage at Konispol IIIa has parallels with that of Level C Top at Sidar (Corfu), and with the Impresso ware from Koirospilios (Leukas) as well as with other sites on the Italian side of the Adriatic coast. The discovery of a large number of domesticated animal bones in the Early Neolithic layer at Konispol, mainly of goat and sheep, and a small quantity of carbonised grain seeds attest to the emergence of an early form of agricultural and pastoral economy in this area at the time.

Konispol fits the model of an autochthonous culture, and has yielded data on the transformation of its Mesolithic hunter-gatherers into Neolithic herders, mainly of sheep and goat. We think that the Konispol cave site has to be included among types of site where food production preceded pottery production, a known scenario in Greece (e.g., Francthi cave, Argissa Magula, Nea Nikomedia) and the Eastern Adriatic (e.g., Crvena Stijena).

The Konsipol cave fits the so-called ‘regional contact model’ involving trade and the exchange of ideas, as well as individual frontier mobility, according to Zvelebil’s classification.

This cultural group is found mainly in South-eastern Albania, with its centre in the Korça basin, where the main sites at Podgorie, Vashtëmia and Barçi were discovered.

At the three settlements, the Early Neolithic cultural deposits lay directly above the sterile levels of the plain, and were not preceded by any other older cultural layer to which the Podgorie I–Vashtëmi cultural group could be related. Podgorie has yielded the richest data and shows the clearest development of this Early Neolithic group.

The cultural layer consists of seven building levels (3.10–3.20m in depth), developed over three phases, Ia–c. The two earliest phases, Podgorie Ia–b, represent the classic stages in the development of this culture, while phase Ic is a stage of decline.

The Podgorie Ib phase includes the same pottery categories as Podgorie Ia, as follows: white on red painted ware is also present, but in not in the same quantities as in the earlier phase; Impresso pottery increases in frequency compared to the preceding phase; incised ornaments appear very rarely; nail pinching and nail printing techniques can be identified; shallow grooved lines are rare. Red slipped monochrome ware gradually begins to decrease until it almost disappears completely in the following phase Ic. A new phenomenon that is exclusively related to this phase and distinguishes it as a separate stage in the classic development of this culture is the appearance of barbotine decoration.

The polychrome pottery distinguishes Podgorie I–Vashtëmi from other similar cultures, placing this group chronologically at a later developmental stage of the Early Neolithic. Actually, the earliest stages of this cultural group are not known in Albania. On the other hand, its analogies and similarities, mentioned above, suggest that this culture could be considered as deriving from other Early Neolithic cultural groups of the Anatolian-Balkan regions.

It appears that only during this phase were farming communities fully established in Albania.

During this phase (II1) we can see the extension of Neolithic groups into the deep hinterlands of Central and Eastern Albania. A strong Adriatic impulse moves from the southwest (e.g., from Konispol) to the east, establishing new sites of later chronological phases, such as the settlement caves at Blaz and Nezir (Mat), as well as the settlement cave at Katundas (Berat).

According to the relative chronology, the three phases of Neolithisation in Albania produce the following picture:

Thus far, no evidence has been found of the presence of a PPN horizon in Albania.

(Source: “Different models for the Neolithisation of Albania”, by Adem Bunguri, 2014)

NovoScriptorium: For more on the Neolithisation process in the Balkans and Europe please read the following pots: 1, 2 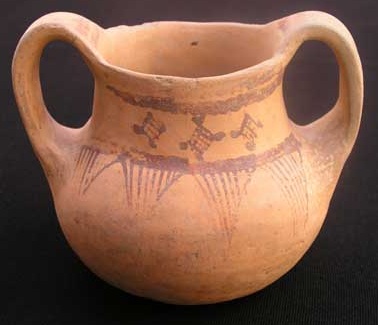 One thought on “The Early Neolithic in Albania”