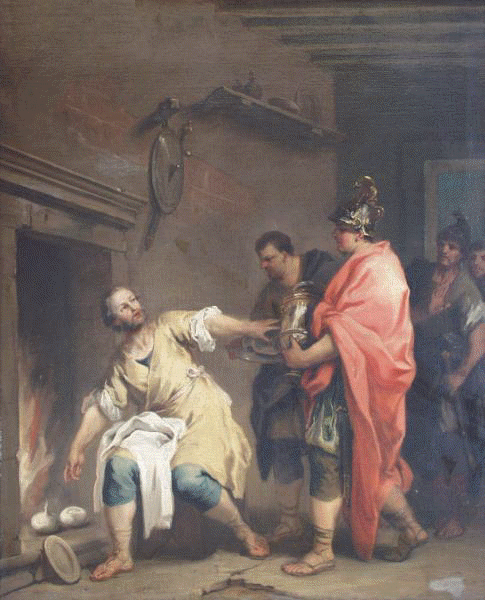 In this post we present an excerpt from Plutarch’s ‘Moralia’ (Apophthegmata Romana).

1. “When some complained against Manius Curius because he apportioned to each man but a small part of the land taken from the enemy, and made the most of it public land, he prayed that there might never be a Roman who would regard as small the land that gave him enough to live on.“

2. “When the Samnites came to him after their defeat and offered him money, he happened to be cooking turnips in pots. He made answer to the Samnites that he had no need of money when he could make his dinner from this sort of food; and for him it was better than having money to hold sway over those who had it.“

a) Manius Curius was a pious man (“he prayed that…”)

b) He cared for the common/public good

c) He despised wealth, having realized the danger of avarice and greed, and the individual and general corruption that they bring along

e) He had realized that you can only convince other people about your ideals/beliefs when you ‘practice what you preach‘, to the detail

All the above are indicative of a man whose way of thinking is clearly Philosophical. Therefore, what he suggested to his fellow Romans was also a Philosophical way of living, in an attempt to secure the Roman Polity from future corruption.