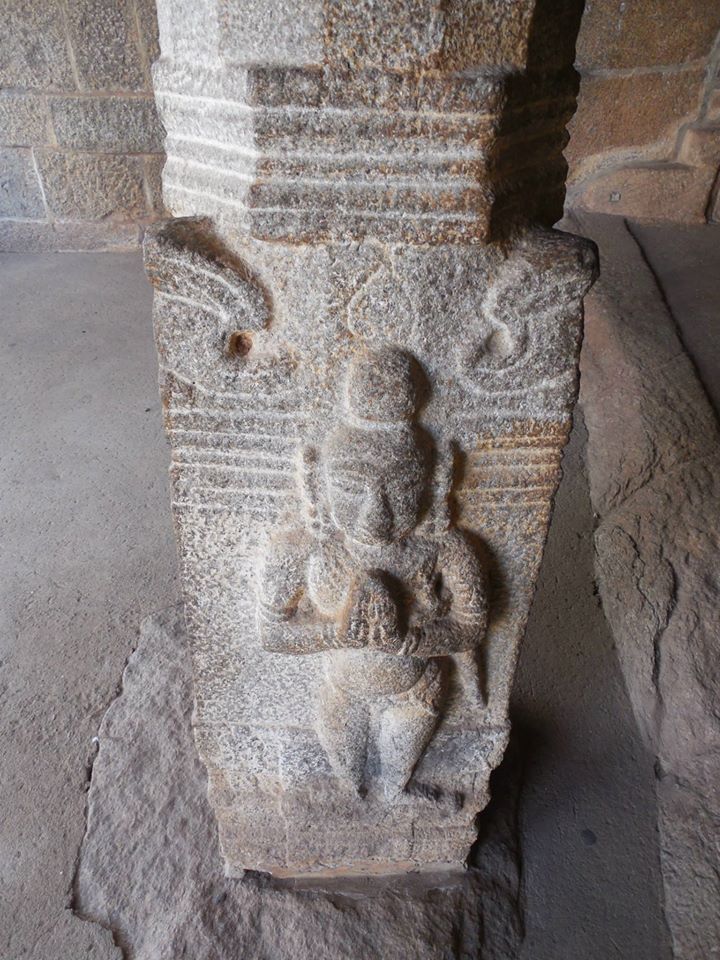 This post is mostly a photographic presentation of monuments from Mamallapuram, Tamil Nadu, India.

Tamil Nadu is a state in southern India. Its capital and largest city is Chennai. Tamil Nadu lies in the southernmost part of the Indian subcontinent and is bordered by the union territory of Puducherry and the South Indian states of Kerala, Karnataka, and Andhra Pradesh. It is bounded by the Eastern Ghats on the north, by the Nilgiri Mountains, the Meghamalai Hills, and Kerala on the west, by the Bay of Bengal in the east, by the Gulf of Mannar and the Palk Strait on the southeast, and by the Indian Ocean on the south. The state shares a maritime border with the nation of Sri Lanka.

The region was ruled by several empires, including the three great empires – Chera, Chola and Pandyan empires, which shape the region’s cuisine, culture, and architecture.

Mandapa of Krishna or Krishna Mandapam is a monument at Mahabalipuram, on the Coromandel Coast of the Bay of Bengal, in the Kancheepuram district of the state of Tamil Nadu, India. It is part of the Group of Monuments at Mahabalipuram, a UNESCO World Heritage Site inscribed in 1984. It is located on a hillock next to the open rock relief of Descent of the Ganges (Mahabalipuram).

It is constituted by an originally open-air bas-relief dedicated to Lord Krishna, dating to the mid-seventh century, which was later enclosed within a mandapa in the 16th century during the Vijayanagara Empire. Notable carvings inside are sculpted panels that bring out the story of Krishna lifting the Govardhana Hill to protect the cowherds and gopis (milk maids) from heavy rains and floods – the “most poetic and endearing” Indian or Angkor sculpture-based representation of this legend – and there are also scenes of Krishna frolicking with the milk maids.

Krishna’s Butterball is a gigantic granite boulder resting on a short incline in the historical coastal resort town of Mamallapuram in Tamil Nadu state of India. The boulder is approximately 6 meters high and 5 meters wide and weighs around 250 tons. It seems to float and barely stand on a slope on top of 1.2-meter (4 ft) high plinth which is a naturally eroded hill, and is said to have been at the same place for 1200 years. A part of the boulder on top back has eroded away, making it look like a half-spherical rock from the back, while it looks round shaped from other three sides.

Mahishasuramardhini Mandapa (Cave Temple; also known as Yampuri) is an example of Indian rock-cut architecture dating from the late 7th century, of the Pallava dynasty. It is a rock-cut cave temple located on a hill, near a lighthouse, along with other caves in Mamallapuram. Mamallapuram, also popularly known as Mahabalipuram, is a small village to the south of Chennai, in the state of Tamil Nadu, India. The temple is part of the Group of Monuments at Mahabalipuram, a UNESCO World Heritage Site inscribed in 1984. This Cave Temple has many interesting architectural features of which three exquisitely carved reliefs on the cave walls of three sanctums are prominent. One is of Vishnu reclining on the seven hooded serpent, Adisesha, another of Durga, the main deity of the cave temple Durga slaying the buffalo headed demon Mahishasura, and the third sanctum also has a sculpture of Shiva.

The Olakkannesvara Temple (“flame eye”; commonly Olakkanatha; also known as, “the Old Lighthouse”) is in Mahabalipuram town, overlooking the Coromandel Coast of the Bay of Bengal in Kancheepuram District in Tamil Nadu, India. Like the Shore Temple, the Olakkannesvara Temple is a structural temple. Built in the 8th century, it is situated directly above the Mahishasuramardini mandapa on a hillock which provides scenic views of the town. As the area is within a high security zone because of a nuclear power station a few kilometres to its south, photography is prohibited. The Olakkannesvara Temple is sometimes mistakenly referred to as a Mahishasura temple. It is dedicated to an incarnation of Shiva. It is one of the Group of Monuments at Mahabalipuram that were designated as a UNESCO World Heritage Site since 1984.