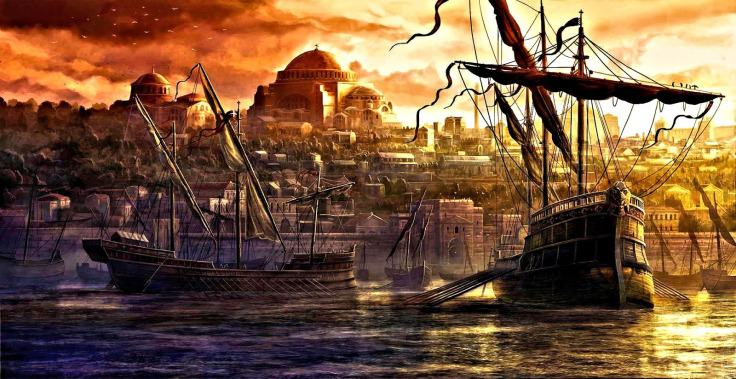 There is no period of history which has been so much obscured by incorrect and misleading titles as the period of the later Roman Empire. It is, I believe, more due to improper names than one might at first be disposed to admit, that the import of that period is so constantly misunderstood and its character so often misrepresented. For the first step towards grasping the history of those centuries through which the ancient evolved into the modern world is the comprehension of the fact that the old Roman Empire did not cease to exist until the year 1453. The line of Roman Emperors continued in unbroken succession from Octavius Augustus to Constantine Palaeologus.

Now this essential fact is obscured as far as language is able to obscure it by applying the name ” Byzantine ” or the name ” Greek ” to the Empire in its later stages. Historians who use the phrase “Byzantine Empire” are not very consistent or very precise as to the date at which the ” Roman Empire ” ends and the ” Byzantine Empire ” begins. Sometimes the line is drawn at the foundation of Constantinople by Constantine the Great, sometimes at the death of Theodosius the Great, sometimes at the reign of Justinian, sometimes (as by
Finlay) at the accession of Leo the Isaurian ; and the historian who adopts one line of division cannot assert that the historian who adopts a different line is wrong. For all such lines are purely arbitrary. No ” Byzantine Empire ” ever began to exist; the Roman Empire did not come to an end until 1453.

But, it may be objected, is it not true that the Roman Empire in the days of Constantine VII, who reigned in the tenth century, was completely different from what it was in the days of Constantine I., who reigned in the fourth century? and having in view this great difference in character, is it not permissible for historians, as a mere matter of convenience, to distinguish the later period by some confessedly appropriate word like ” Byzantine ” or ” Graeco-Roman “? Such a use may be of course convenient and harmless in conversation among those who are fully aware that it is only a phrase of convenience ; and there is no objection to ” Byzantine art ” or ” Graeco-Roman law.” But in writing or lecturing, such expressions as Byzantine, Greek, or Romaic Empire are highly objectionable, because they tend to obscure an important fact and perpetuate a serious error.

It seems especially unfortunate to adopt one of these names as the title of a book, and thus help to stereotype as a separate unity what is really a part of a continuous series. Every century of the Roman Empire differed from the preceding and from the succeeding, but the clevelopment was continuous ; the Empire was still the Roman Empire, and I am not aware that it is usual to give a man a new name when he enters upon a new decade of life. We designate a man as young and old; and so we may speak of the earlier and later ages of a kingdom or an empire. But Byzantine is a proper adjective, and is too apparently precise not to be misleading. Gibbon perhaps is almost the only modern historian who, in treating this subject, has not done injustice to the continuity of history by the title of his work ; but unfortunately in reading the later chapters one is apt to forget what that title is.

Moved by these considerations, I have avoided speaking of a Byzantine, a Greek, or a Graeco-Roman Empire, and have carefully restricted myself to the only correct appellation. For the sake of distinction the word “later” has been added on the title-page; and no further distinction is required, at least till the year 800, which marks the termination of my work.

This brings us to another unfortunate use of words, which similarly tends to perpetuate an erroneous impression. A rival Roman Empire was founded in the West by the coronation of Charles the Great in 800 ; and it is evidently very convenient to distinguish the rival Empires by prefixing the adjectives Western and Eastern. And this nomenclature is not only convenient, but quite justifiable ; for it suggests no historical error, while it expresses succinctly the European situation.

But unhappily the phrase Eastern Roman Empire is not confined to this legitimate use. We hear of an Eastern and a Western Roman Empire in the fifth century; we hear of the Fall of a Western Empire in 476. Such language, though it has the sanction of high names, is both incorrect in itself and leads to a further confusion. In the first place, it is incorrect. The Roman Empire was one and undivided in the fifth century; though there were generally more Emperors than one, there were never two Empires. To speak of two Empires in the fifth century-and if such speech applies to the fifth it applies also to the fourth-is to misrepresent in the grossest manner the theory of the imperial constitution. No one talks about two Roman Empires in the days of Constantius and Constans; yet the relation of Arcadius and Honorius, the relation of Theodosius II and Valentinian III, the relation of Leo I. and Anthemius, were exactly the same as the political relation which existed between the sons of Constantine. However independent one of another, or even hostile, the rulers from time to time may have been, theoretically the unity of the Empire which they ruled was unaffected. No Empire fell in 476 ; that year only marks a stage, and not even the most important stage, in the process of disintegration which was going on during the whole century. The resignation of Romulus Augustulus did not even shake the Roman Empire, far less did it cause an Empire to fall. It is unfortunate, therefore, that Gibbon spoke of the “Fall of the Western Empire,” and that many modern writers have given their sanction to the phrase. Notwithstanding all that Mr. Freeman has said on the matter in sundry places, it will be probably long time yet before the inveterate error of assigning a wrong importance to the year 476 A.D. has been finally eradicated.

In the second place, this nomenclature leads to a further confusion. For if the erroneous expression Eastern Roman Empire be admitted into use for the fifth century, the inevitable tendency is to identify this false abstraction with the Eastern Roman Empire, rightly so called, of later days. And this identification unavoidably leads to the idea that a state called the Eastern Roman Empire came into being after the death of Theodosius the Great, in 395 A.D., and continued until 1453 A.D.

The simplicity of history is thus obscured. Nothing can be easier than to apprehend that the Roman Empire endured, one and undivided, however changed and dismembered, from the first century B.C. to the fifteenth century A.D.; and that from the year 800 forward we distinguish it as Eastern, on account of the foundation of a rival Empire, which also called itself Roman, in the West.

…It is convenient and harmless to talk about Byzantine art or even “la vie byzantine,” but it is dangerous to talk about a Byzantine Empire; for if we do so we run the risk of provoking universal verdicts of history. It might therefore be advisable, even if this were the only ground for doing so, to abandon the name and elude hard sentences by leading the accused forth under a different appellation. But it is not the only or the most important ground; as we have already seen, the name is improper, and it is therefore
not only advisable but necessary to discard it.

…The coronation of Charles the Great marks a new departure in European history, and it therefore forms, as Arnold recognised, a suitable end as well as a suitable beginning. After 800 there are two Roman Empires…

…The Church was so closely connected with the State that the ecclesiastical element cannot be ignored in histories that are not ecclesiastical ; but I have endeavoured to encroach on this ground as little as possible. As time went on, the influence of the Greek Church became stronger, and consequently, with each succeeding century, church affairs claim a larger measure of a historian’s attention…

2 thoughts on “The reasons why the term ‘Byzantine’, used to describe the Christian Roman Empire, is incorrect and dangerous”