Ancient rock carvings in Sweden evidently aren’t of local boats but show ships bringing the metal from the Levant.

Bronze tools found in Sweden dating from 3,600 years ago were made using copper from the Mediterranean, archaeologists have shown. They now also believe that rock carvings of ships found in Bohuslän, Sweden were visual documentation of trade between ancient Scandinavia and the Mediterranean.

Most of the copper circulating in Bronze Age Europe apparently originated from Sicily, Sardinia, the Iberian peninsula – and Cyprus, going by isotope analysis. (Although there seems to have been some exploitation of the copper mines in Timna, ancient Israel during the Bronze Age, it was small in scope and not involved in this trade.)

The precious copper was exchanged for Nordic amber, which was as cherished as gold in Mycenaean Greece and in the prehistoric Middle East. And, it seems, cultural and religious influences joined on the ride.

The ancient Cypriot copper industry produced relatively pure stuff, which was smelted into “oxhide ingots”. Oxhide ingots were not made of cow pelts. They were Bronze Age copper slabs that looked like nothing so much as stretched hides, with four extruding corners that were used to carry them. Corners to carry them would have been a great convenience because they were horribly heavy – about 37 kilos each.

Vast quantities of ingots have been found in Cyprus, Sardinia, mainland Greece and Crete. The biggest collection was found in the “Uluburun shipwreck,” that sank in the late 14th century BCE off Turkey. Underwater excavation shows that the ship carried 10 tons of ingots, all of which seem to have originated in Cyprus.

The copper trade around the Mediterranean Sea is evident from around 1550 BCE – but going by the bronze finds dating to about that same time in Scandinavia, it apparently began earlier. In any case, Gothenburg University researcher Dr. Johan Ling thinks however that Cypriot copper was not massively and purposefully imported to northern Europe, but trickled along the Bronze Age trade routes.

Gems for weapons and the body of a bride

Isotope analysis of some 70 bronze daggers and axes from Bronze Age Sweden by scientists from Sweden’s University of Gothenburg, headed by Dr. Johan Ling, proved that at least some originated in Cypriot copper mines. Most probably, it was traded for amber.

“Bronze was as valuable a raw material as oil is today,” says Prof. Kristian Kristiansen of the University of Gothenburgs archaeological department. It and amber were the twin engines of the Bronze Age economy, to the extent that marriage alliances are believed to have been forged between powerful families in ancient Europe in order to secure the amber trade.

The “Egtved Girl,” the body of a Bronze Age girl dating from around 1380 BCE, whose well-preserved remains were found in Denmark in a barrow (a tree-trunk coffin) in 1926, seems to emblemize the practice of prehistoric long-distance marriages to seal trading bonds, though she cannot be connected specifically to a specific branch of commerce.

Analysis of the girl’s hair, teeth, and nails shows that she originated in a region far from Denmark, and strontium analysis of her hair shows that she had been on a long journey shortly before she died. Even the woolen fabric of her clothes is not native, but seems to be from the Black Forest in Southern Germany. “My guess is that the Egtved Girl was a southern German girl who was given in marriage to a man in Jutland, to forge an alliance between two powerful families,” Kristiansen says.

Amber was used not only to pay for copper, which was turned into bronze weapons, but also for fripperies, such as glass beads imported from the Levant. A separate study of 271 glass beads found in Danish Bronze Age graves found they dated to around 1400 BCE and that 23 of them originated in Egypt and Syria.

And now the archaeologists think they have recognized images of the ships that brought the copper north.

Thousands of elaborate rock carvings dating to the Bronze Age have been found in Scandinavia, mostly in the region of Bohuslän, on the Swedish west coast. A recurring motif on the rock carvings is ships – and intriguingly, most of these ship carving sites also have images that resemble Mediterranean oxhide ingots. 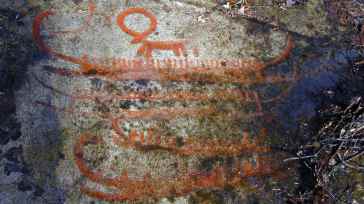 A copper ingot found at Torsbo is the same in shape as ingots excavated in Crete, at the palace of Hagia Triada, Tylissos and Mochlos, and is just like the copper ingots found in the Uluburun shipwreck. And a markedly similar depiction of a copper even appears on the Tomb of Rekhmire.

Another peculiar feature of these carvings in Scandinavia is large bulls by the ships, and scenes of bull-leaping – a common motif of Middle Bronze Age figurative, notably of Minoan Crete and also found in Hittite, Anatolia.

The appearance of rock art depicting ships and oxhide ingots around 1600 BCE in Scandinavia is accompanied by Aegenized depictions of warriors, weapons, chariots, omega symbols and also, symbolic representations of Mesopotamian sun disks and ornaments on jewelry and sword hilts.

All attest to a cultural exchange that went far beyond the mere transfer of goods. Ideas also evidently travelled along the trade routes.

Identical spiral ornaments appear on a piece of jewelry found in the tomb of “the distant traveller” at Simrishamn, Sweden – and in the necropolis of Asine at Argolis in Greece. The “Kings Grave” in Kivik, southeast Sweden, dating to around 3000 years ago, has numerous images and religious symbolism also found in the Mycenaean world.

Kaul Flemming, a researcher from the Danish national museum who studies beads in Danish Bronze Age burials, is convinced that there was a cultural transfer between the Aegean and Scandinavia. “The motifs from the Kivik grave may well been taken from Mycenean Greece,” he tells Haaretz, adding, “The chariots, the light two-wheeled cart, can also be seen on the Mycenaean grave steles.”

Chariots were common in the Bronze Age Mediterranean, where they were employed as fast and prestigious military vehicles, and were often depicted in art.

Flemming believes that the spiral patterns should also be seen as a cultural transfer from Mycenaean Greece. Numerous other objects, such as a single-edged razor with horse head handle, also seems Mediterranean in origin – in concept at least. However, Flemming makes clear these were not imports, but rather imitations.

“I think that similar cosmological beliefs were in play, that, altogether, indicate some kind of connection,” Ling concludes.

(The photo above – The spiral decoration on objects from Bronze Age-Sweden (left) and Greece (right) are practically identical, indicating a cultural interchange between the two regions. Credit: Nils-Axel Mörner, Long Distance Travell and Trading in the Bronze Age: The East Mediterranean- Scanadinavia Case by Nils-Axel Mörner and Bob G Lind, Archaeological Discovery, 2015, 3, 129-139)