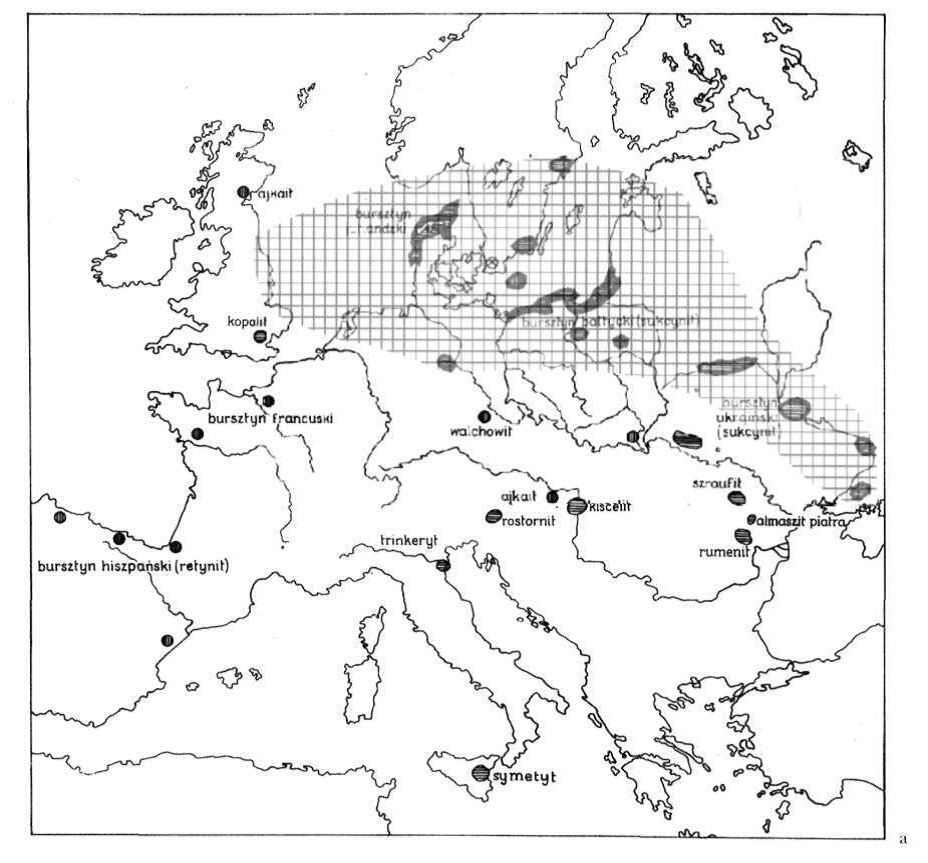 The archaeological artefacts that we study form only a minor fraction of the objects that were in circulation in prehistoric times. In the case of amber, however, there is an exceptional degree of underestimation. Amber is soft, fragile, inflammable and weathers easily. All this taken together makes the single amber artifacts that we find, in fact, representative of much larger quantities that were in use by a community under investigation.

There are a lot of places in Europe where fossil resins have been found.
However, on the basis of physico-chemical analyses it is easy to distinguish Baltic amber (succinite) from all other kinds of fossil resins. Owing to many analyses of fossil resin artifacts, which were started by Prof. Kurt Beck, it has become clear that it was Baltic amber that predominated in both Europe and the Mediterranean over many centuries.

(…) As a result of quaternary geological processes relating to glacial and stream transportation, amber can be found in many places all over Europe. Yet this fact does not undermine the opinion that the main cultural role has been played throughout prehistory and virtually to this day by the centre at the mouth of the Vistula River on the Baltic (…) All those who wanted to have continuous supply of amber in any meaningful quantity had to establish contact, directly or indirectly, with the southern shores of the Baltic.

(…) Until the end of the 4th millennium BC, amber remained a local raw material. Not until the beginning of the 3rd millennium BC did its cultural career start. The first archaeological culture to spread amber goods far beyond the Baltic area was the Neolithic Globular Amphora culture. This happened in the first half of the 3rd millennium BC. This culture developed the oldest broadly spread style of amber goods (“amphora style”). The items characteristic of this style were discs and v-perforated buttons, and simple beads. The discs and pendants must have been chest ornaments suspended on a leather strap, whereas the beads served as applique ornaments especially sewn on to the upper part of dress.

Amber continued to spread in the Bell Beaker period, i.e. the second half of the 3rd
millennium BC. In this case also we deal with a specific style of amber goods (especially, v-perforated buttons) and other kinds of simple beads. V-perforated buttons must have continued as dress appliques whereas simple beads formed parts of necklaces. A characteristic typological difference can be observed between v-perforated buttons encountered in the Globular Amphora culture and the Bell Beaker phenomenon. In the former the perforations are bored from the convex side, while in the latter they are always made from the flat side. Together with Bell Beakers, amber reached the Mediterranean for the first time, as C. du Gardin showed in her works. This took place in southeastern France.

The next styles of amber goods are already linked to the beginnings of the Bronze Age,
specifically to the Unetice, Otomani-Fuzesabony and Tumulus cultures. Within the Unetice culture one can distinguish two types of amber goods. The first is related to the northern frontier of this culture (north-Unetice style for short). Its dominant form was that of discs, which occur only in rich graves (in particular under barrows) in company with gold and bronze goods. They were worn, as in the Globular Amphora culture, on the chest. Their presence in assemblages together with Early Bronze Age types of artefact points to the vitality of post-Neolithic traditions in this part of Europe. Their findspots include Przysieka Polska, Brusy, Szczecin-Plonie (with a gold object) and Łeju Małe (with gold objects). Hence amber was an element of a broader cultural phenomenon, whose characteristic features included the so-called princely graves (Helmsdorf, Leubingen, Łęki Małe), fortified settlement centres (Bruszczewo for one), or elaborate tin-bronze metallurgy, what was recently shown by Knut Rassmann.

The second style, south-Unetice, was made up primarily of necklaces consisting of amber beads and bronze (copper) spirals. It should be stressed here that amber goods enjoyed a different status in the northern and southern styles. In the north, they are found in graves classifiable as high-status graves that have prestige, social and political significance (barrow graves in which amber occurs together with gold and bronze, i.e. with other “strategic” materials), whereas the southern style’s contexts are graves containing more standard types of grave-goods, for the most part female inhumations.

Close, presumably direct, contacts of Unetice culture populations with amber-producing areas on the southeastern Baltic are attested not only by many imports of Unetice metal types but also by an extraordinary find, an amber model of an Unetice dagger from the vicinity of Nidzica. The find is a further indication of the great prestige that metal goods, specifically daggers, enjoyed among those societies (in the literature the find is generally identified as a “schematic idol.” Prof. F. Mazurowski of Warsaw University has drawn my attention to a more profound interpretation. In his opinion the find has a formal resemblance to Cycladic stone idols). Other metal goods of distant origin are known from the region, for example a bronze winged pin from Kleszczewko (In German, Fliigelnadel), which shows us relationships to the Alpine region, a gold lunula from Malbork, a gold pendant from Wąsosz (both having western links, to Ireland and Jutland), and a gold halberd from Inowrocław. Their presence justifies the hypothesis that areas on the southern Baltic were included in the network of long distance exchange by the Early Bronze Age at latest.

In the Otomani-Fuzesabony culture, which centred upon the upper Tisza River, the
style of amber goods continues south-Unetice patterns. Amber goods are found in graves that belong to large cemeteries. The set of elements used in putting together necklaces is expanded: besides amber and simple spirals there are found faience beads, the teeth of wild animals, and other metal pendants.

A major change is brought by the fashions of the Tumulus culture, known especially
from Alpine regions. Along with beads (as parts of necklaces) spacer-plates appear, which can be divided into two types, the simple and complex. They indicate the development of new ways to create complex amber necklaces, for which reconstructions were suggested by Ralf Hachmann some years ago.

In sum, taking into consideration the spectacular character of the objects and the context in which they occur, the following scenario of the cultural adoption of amber emerges for Central Europe: amber was known to all the societies of Central Europe by the beginning of the 3rd millennium BC. In certain places and periods, however, it acquired a special position as an indicator of the highest prestige, together with other “strategic” raw materials such as gold and bronze. This was the case in the northern zone affected by the influence of the Unetice culture (on the central European plain). The exceptionally advanced level of the societies in these areas will need to be elucidated in future investigations.

Our knowledge of the chronology of the late Neolithic and early Bronze Age is relatively well established, thanks both to very many Carbon-14 dates and increasingly numerous dendro-dates. At present, there are no indications that these data might in any way contradict stratigraphic information or classic typochronology. Using these data, one can suggest the following chronology for the styles of amber goods mentioned above:

– The style of the Globular Amphora culture (covering the classic horizon of this culture): the first half of the 3rd millennium BC;

– The style of the Bell Beaker phenomenon: the second half of the 3rd millennium BC;

During the first half of the 2nd millennium BC, amber appeared in the Aegean. This
question was studied in depth by A. Harding and H. Hughes-Brock. Summarising their
discussions, one may claim that in the Mycenaean culture two amber styles can be distinguished, namely, an early Mycenaean (LH I-II) and a late Mycenaean (LH III). The first is linked to the Shaft Graves. A characteristic feature of this style is the use of spacer-plates. Hence, it has a clear stylistic connection to the Tumulus style of Central Europe. Amber was counted then among objects of the highest prestige and occurred almost solely in graves of the ruling elite. The late Mycenaean style, apart from the so-called Tiryns beads (whose function has not been clearly identified at present), does not have such spectacular contexts. Amber was to be found in graves in different parts of Greece; moreover, it was available to people coming from broader social groups.

(…) According to the short chronology, the early Mycenaean style would continue from ca. 1600 to 1400 BC, and the late Mycenaean one from ca. 1400 to 1065 BC. According to the long chronology, taking into account S. Dietz’s belief that the oldest amber artefacts appeared at Mycenae as early as MH IIIB, the first occurrences of amber there could fall between 1800 and 1700 BC. The dating of the late Mycenaean style would not involve many changes.

For the question of amber, these differences are significant only in part. For in the light of current data there is no doubt that the classic stage in the development of the Unetice culture, i.e. the first apogee of amber in the cultural sense in the prehistoric societies of Europe, precedes the beginnings of the Mycenaean culture by far. The latter flourishes contemporaneously with the Otomani-Fuzesabony and Tumulus cultures in Central Europe. These are the cultures that display the most connections in their material cultures with the Mycenaean culture.

The literature on the subject has traditionally accepted, from the time of J. M. de Navarro, a route of distribution along waterways (linking the Elbe drainage, through the Alpine region and the Adriatic, with the Aegean). In more recent literature, more and more evidence has been gathered in favour of this route and its significance is beyond dispute today.

The significance of the land route (from the lower Danube drainage, along the valleys of the Morava/Vardar river, or along the Strymon/Struna river) is open to question.

(…) There are, however, more and more clear signs of the significance of an eastern sea route, which ran from the upper Vistula drainage and the northeastern part of the Carpathian basin along the Boh River to the Black Sea, and which may be dated to the declining years of the Bronze Age and the early Iron Age. A noteworthy argument in its favour is the cemetery in Gordeevka on the upper Boh. Discoveries were made there of numerous amber items, including Tiryns beads. The site can be synchronised on the strength of analogies between metal goods with the Tumulus culture in Central Europe, which is confirmed by a series of Carbon-14 dates as well. In the Aegean, the site corresponds in terms of style and chronology to the late Mycenaean style.

(…) The process of amber dissemination can be ordered into a few stages, with the raw
material reaching the Mediterranean in the second half of the 3rd millennium BC, in the period of the Bell Beaker phenomenon, hence, before the dawn of the Bronze Age in Central Europe. It must be noted here, however, that this took place in the central part of the Mediterranean, i.e. in southwestern France and northern Italy.

Slightly later, namely in the early 2nd millennium BC, amber-producing areas on the
southeastern Baltic were a permanent point in the network of long-distance contacts. We have evidence (finds) confirming this. The contacts had been established before amber appeared in the Aegean, which took place in the beginning of the Mycenaean culture.