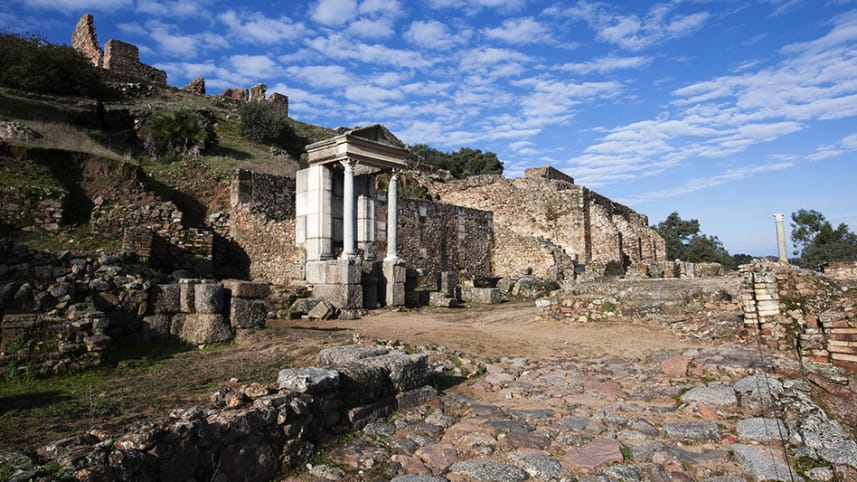 Archaeologists excavating the ancient city of Munigua in southern Spain have found a vast Roman copper mining operation built on an older mine dating back thousands of years.

Exploitation of ore at Munigua apparently began by the Turdetani, the original inhabitants of the region, over 4,000 years ago. Now the excavators have discovered an elaborate system of ventilated underground galleries connected by tunnels dating to the Roman era. 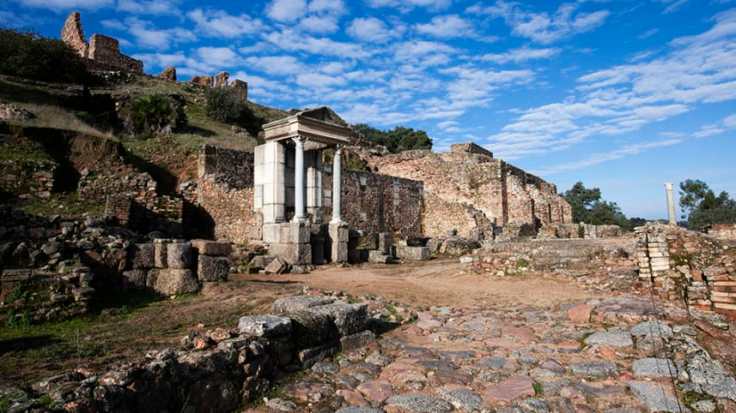 They also found shafts connecting at various heights forming floors that let the miners extract metal deeper than had been believed possible at the time. Happily for the miners, the ancient Romans were on to the secret of ventilation.

The Munigua mine supplied the Roman Empire with vast amounts of iron and copper until the late second century C.E., when all the mines in Hispania were shut down.

The earliest evidence for actual settlement at Munigua, as opposed to mining operations, is Greek ceramics from the fourth century B.C.E. Archaeologists believe that the first settlement was established by the Turdetani. By the time the Romans conquered it for its mines, the city was apparently already a major hub.

Archaeologists digging there since 1956, most recently from the German Archaeological Institute in Madrid, have found temples, smaller sanctuaries, a two-story hall, a forum, thermal baths, city walls and a vast necropolis.

The monumental terrace sanctuary at Munigua has been known all along, going by drawings from the 18th century; historical sources refer to it as the Castle of Mulva.

Exactly what divinity was adored there remains uncertain, although it may well have served the cult of the emperor (Fortuna Augusta and Hercules Augustus). Certainly the monumental sanctuary atop the 150-meter-high hill had to be constructed to worship somebody vastly important such as the emperor himself.

“This type of terrace sanctuary is found in republican Latium – the region around Rome. Here in Munigua we have the only example of this monumental architecture in Hispania,” says Prof. Thomas G. Schattner, director of the Madrid office of the German Archaeological Institute and head of the excavations.

Valuable enough to kill for

It was partly pursuit of valuable metals that motivated Rome to invade places as far-flung as Israel. Certainly the ancient copper mines in today’s southern Israel stepped up production during the Roman occupation.

In Spain too the Romans didn’t introduce mining, they exploited mines already in use. But first they had to overthrow the mines’ new overlords, the Carthaginians.

Copper and iron had been mined in Andalusia for over 4,000 years. Come the late third century B.C.E., the Punic general Hamilcar Barca of Carthage set out to expand his empire and founded Carthago Nova (New Carthage) on Spain’s southeast coast. He also took over the mines of Munigua.

Within mere years, the Spanish mines had refilled the original Carthage’s coffers.

Inevitably, the Punic ambitions led to conflict with Rome. In 218 B.C.E., the Roman commander Cornelius Publius Scipio landed on the Iberian Peninsula with a Roman army and targeted the mines, including those in New Carthage and Castulo, in an attempt to cut off Carthage’s metal supply and strangle its economy.

In a daring attack, when the water in the harbor had dropped lower than usual, 500 Roman soldiers waded ashore and, passing the forts, conquered New Carthage. From that point things went steadily backward for the Carthaginians in Spain.

Over a hundred years later, in the second century B.C.E., metal again began to be mined massively, which ancient authors link with massive migration from Italy to Hispania – the Roman name for the Iberian Peninsula.

We know that metal production enormously increased partly from vast slag deposits in Munigua, some the size of football fields. This has much to do with our knowledge of their mining operations.

“Slag is a first-class archaeological source material, as it can be analyzed and can give precise information about the metal melted, the process by which melting was achieved and the chemical characteristics of the metal,” Schattner told Haaretz.

The Romans did more to make Spain their own, and while about it, knew how to make the most of mountainsides. In Munigua, on the second terrace halfway up the hill, the archaeologists found a tetrastyle temple with a podium, probably dedicated to the Roman god Jupiter. A temple of Mercury is situated beside a two-story porticus and a nymphaeum (a monument consecrated to the nymphs, usually situated in public bathhouses).

The lower terrace was the true nerve center of the city. Here the archaeologists uncovered a square plaza with porticoes, surrounded by public buildings, among them the curia and tabularium. The curia was the place where the inhabitants of the town discussed their affairs, and the tabularium was where official state documents were stored.

Two inscriptions carved on bronze tablets were found in the forum. One, dating to the Augustan period, is a hospitium-treatise in which Munigua accepts the control of its Roman patron Sextius Curvius Silvinus. The second is from Emperor Titus to the city, dated September 79 C.E.

Baths found on the lower terrace dating to the time of Nero still have intact stucco on the walls, and an arched ceiling. The floors of the frigidarium (cold bath) and the tepidarium (warm bath) were found fully preserved, with bricks laid in a herringbone pattern.

A dozen houses were discovered, half of which have been excavated. All date to Vespasian’s development of the city, which began around 70 C.E. The archaeologists also found two necropolises, one featuring richly decorated coffins and another cut into the rock containing urns that would have held cremated bodies.

Yet for all Munigua’s great development, the large-scale Roman ore extraction seems to mark the end of the settlement.

In the third century C.E., a hiatus is observed, perhaps originating in a massive earthquake that left buildings in ruins from which Munigua seems to have never fully recovered. The city would have inhabitants for another 300 years, but no new building program seems to have been undertaken.

By the late sixth century C.E., the place seems to have been all but abandoned. A few pieces of Islamic ceramics attest that some life remained, but not much, and not for long. 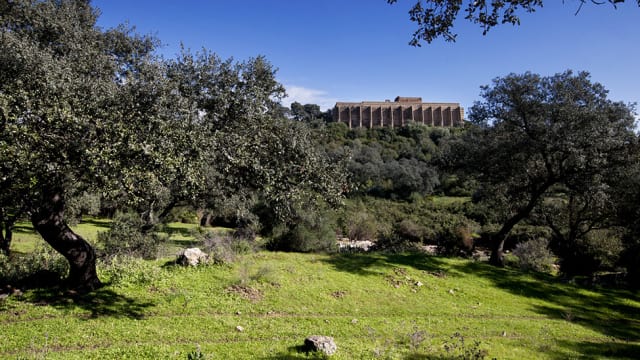