Here we present selected excerpts from Dionysius of Halicarnassus’ book ‘The Roman Antiquities‘ (The Loeb Classical Library). Dionysius informs us here of Romulus’ two institutions, the Senators and the Celeres

“As soon as Romulus had regulated these matters he determined to appoint senators to assist him in administering the public business, and to this end he chose a hundred men from among the patricians, selecting them in the following manner.

He himself appointed one, the best out of their whole number, to whom he thought fit to entrust the government of the city whenever he himself should lead the army beyond the borders. He next ordered each of the tribes to choose three men who were then at the age of greatest prudence and were distinguished by their birth. After these nine were chosen he ordered each curia likewise to name three patricians who were the most worthy. Then adding to the first nine, who had been named by the tribes, the ninety who were chosen by the curiae, and appointing as their head the man he himself had first selected, he completed the number of a hundred senators. The name of this council may be expressed in Greek by gerousia or ‘council of elders’, and it is called by the Romans to this day; but whether it received its name from the advanced age of the men who were appointed to it or from their merit, I cannot say for certain. For the ancients used to call the older men and those of greatest merit gerontes or ‘elders’. The members of the senate were called Conscript Fathers, and they retained that name down to my time. This council, also, was a Greek institution. At any rate, the Greek kings, both those who inherited the realms of their ancestors and those who were elected by the people themselves to be their rulers, had a council composed of the best men, as both Homer and the most ancient of the poets testify; and the authority of the ancient kings was not arbitrary and absolute as it is in our days.”

“To the senate he assigned honour and authority as follows: to deliberate and give their votes concerning everything the king should refer to them, the decision of the majority to prevail. This also Romulus took over from the constitution of the Lacedaemonians; for their kings, too, did not have arbitrary power to do everything they wished, but the gerousia exercised complete control of public affairs.” 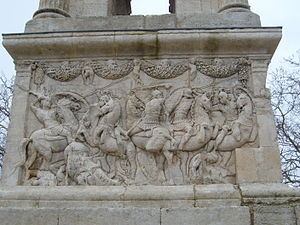 “After Romulus had also instituted the senatorial body, consisting of the hundred men, he perceived, we may suppose, that he would also require a body of young men whose services he could use both for the guarding of his person and for urgent business, and accordingly he chose three hundred men, the most robust of body and from the most illustrious families, whom the curiae named in the same manner that they had named the senators, each curia choosing ten young men; and these he kept always about his person. They were all called by one common name, celeres; according to most writers this was because of the ‘celerity’ required in the services they were to perform (for those who are ready and quick at their tasks the Romans call celeres), but Valerius Antias says that they were thus named after their commander. For among them, also, the most distinguished man was their commander; under him were three centurions, and under these in turn were others who held the inferior commands. In the city these celeres constantly attended Romulus, armed with spears, and executed his orders; and on campaigns they charged before him and defended his person. And as a rule it was they who gave a favourable issue to the contest, as they were the first to engage in battle and the last of all to desist. They fought on horseback where there was level ground favourable for cavalry manoeuvres, and on foot where it was rough and inconvenient for horses. This custom Romulus borrowed, I believe, from the Lacedaemonians, having learned that among them, also, three hundred of the noblest youths attended the kings as their guards and also as their defenders in war, fighting both on horseback and on foot.”