This post is a summary of information on two legendary inventions of Archimedes, the ancient Greek mathematician and engineer; the Sun-focusing mirrors and the Steam cannon, both used to defend Syracuse from the Romans. Science has tested whether or not inventions like these were possible (and, to what extent, effective) back then.

Archimedes is said to have built fantastic machines of war, ranging from catapults to giant claws, that were used against the Romans during their siege of Syracuse, Sicily, in the third century BC.

One of the most controversial stories is that Archimedes set fire to Roman ships by focusing the sun’s rays onto them with concave mirrors. Sceptics say it would be impossible to use mirrors to keep the sun’s rays focused on a moving ship. What’s more, they say, the fires would start slowly and could easily be put out by those on board.

He points out that several scholars, including Petrarch and Leonardo da Vinci, wrote that Archimedes invented a cannon which used pressurised steam to force a projectile out of the barrel at high speed. In 2006 a team at the Massachusetts Institute of Technology constructed such a cannon to their own design and successfully tested it.

Rossi reckons that steam cannon could explain the mirror legend. He suggests that such a cannon could have been heated by sun-focusing mirrors, while the projectiles would have been hollow and filled with an incendiary fluid – perhaps a mixture of sulphur, bitumen, pitch and calcium oxide. Rossi has worked out a possible design for the cannon.

Rossi calculates that a cannonball measuring 20 centimetres across would have weighed around 6 kilograms and could have been fired from the gun at 60 metres per second. A gun positioned 10 metres above sea level and firing at an angle of 10 degrees to the horizontal would have had a range of around 150 metres.

Abstract In the paper is discussed the possibility that Archimedes built and used against the Roman fleet a steam cannon. It is well-known that Archimedes, during the siege of Syracuse, designed and built several war machines to fight against the Romans. Among these war machines, the legend about the large concave mirrors that concentrated the sun rays burning the Roman ships is rather interesting. On this topic are also interesting some drawings by Leonardo Da Vinci where a steam cannon is described and attributed to Archimedes. Starting from passages by ancient Authors (mainly Plutarchos, Petrarca and Da Vinci), the author investigates on the possibility that Archimedes built a steam cannon and used it to hit the Roman ships with incendiary projectiles.

(Source: “Archimedes’ Cannons Against the Roman Fleet?”, by Cesare Rossi)

NovoScriptorium: The ‘steam cannon’ is a different invention from the ‘burning mirrors’. Please read below extracts from two old relevant articles, from the NY Times.

Dr. Ioannis Sakkas, an engineer of the Greek state power corporation and also an amateur historian, set out to prove possible the claim about Archimedes’s burning mirrors, which he had long defended.

He obtained about 50 5-by-3-foot mirrors coated with bronze to resemble ancient mirrors and instructed 50 sailors at Skaramanga naval base near Athens as to how to hold them. Thus arrayed with the mirrors, the sailors succeeded in setting a rowboat afire in a matter of minutes, using only the weak sun of late autumn.

A leading Greek authority on Archimedes who is a staunch advocate of the mirror legend, Dr. Evanghelos Stamatis, helped with the experiment and said he had no doubt that. Archimedes had done something similar. He guessed that Archimedes had used about 100 mirrors to fire Roman galleys at a range of about 160 feet.

Greek scientists have carried out an experiment to show that antiquity’s most famous inventor Archimedes, could indeed have used solar energy to burn the Roman fleet in about 212 B.C.

They lined up 50 to 60 sailors on the pier of the Skaramanga naval base, near Athens each holding a five‐foot oblong mirror. On command the sailors reflected the sun’s rays on a wooden boat 160 feet away. Within seconds it was on fire.

There has always been skepticism about the legend that Archimedes, the Greek mathematician who, tradition has it, yelled “Eureka?” after discovering a principle of weight in water, used some kind of “burning glass” to set fire to the Roman galleys that besieged his Sicilian hometown, Syracuse, from 215 to 212 B.C.

Dr. Ioannis Sakkas, a Greek engineer who works for the state power corporation, said that if Archimedes engineered such a plan, he would have sought to create the effect of a vast concave mirror.

“You can produce this effect by using a large number of flat mirrors lined up and beamed on the same target,” he explained. “Archimedes probably used about a hundred bronze mirrors to set fire to each galley at a distance of 130 to 160 feet.”

The story of the burning of the Roman fleet in Syracuse was vaguely reported by ancient writers, but Dr. Sakkas took up the puzzle after reading a sixth‐century book on “strange devices.”

Dr. Sakkas, who has carried out several experiments since and has succeeded on five occasions, said: “At first I thought Archimedes had invented a large convex lens that he used to focus the sun’s rays on the bows of the wooden galleys. I discarded it early because it would have been an impossible feat. We built about 200 flat bronze‐coated mirrors, measuring 5 feet by 3.”

The target was a small rowboat‐afloat 165 feet from the pier, where the mirrors had been lined up under a fairly weak winter sun. A simulated silhouette of a Roman galley had been stuck to one side.

“It is made of tarred playwood, which burns slowly, although ancient ships were made of cedarwood,” Dr. Sakkas said. “Archimedes would be operating under far better conditions.”

The first smoke appeared in seconds; there were flames in less than two minutes.

Prof. Evanghelos Stamatis, the contemporary authority on Archimedes in Greece, who helped with the experiment and was present, said there was no doubt in his mind that Archimedes had used the sun to burn the Roman ships.

A group of Greek scientists including engineer Alexandros Oikonomidis made a successful test firing a replica model of the ancient steam cannon designed by Archimedes of Syracuse (287-212 BC), the ancient Greek mathematician, physicist, engineer and inventor.

The test was carried out in a field at Koropi, a suburb of Athens. Original cannon had been used to defend the city from invading Romans (213-211 BC). The replica model was constructed four decades ago by Oikonomidis’ late colleague Yannis Sakkas.

The steam cannon basically consists of a metal tube. One end of the tube is capped while the other is loaded with the projectile. Once the tube is heated and reaches high enough temperature, a small amount of water is injected in behind the projectile. It rapidly turns into high-pressure steam, blasting the projectile out of the barrel.

A projectile of about 6 cm diameter reached some 30 meters, far less than the over 1,000 meters the ancient steam cannon larger in size could reach. Still the mission was accomplished.

Oikonomidis, assisted by Yorgos Sakkas, the son of the late engineer, and other Greek experts, proved once again that the design of the machine is working and simple ideas can make great difference.

NovoScriptorium: You may watch optical material (video) from the above mentioned experiments in the following link (mostly available in Greek, with some parts in English, too)

Abstract Archimedes Steam Cannon is worked by a vessel, that can withstand a lot of pressure, to which we add water, and start a fire underneath. The fire heats the vessel, and that causes the water molecules to leave the liquid and populate the vessel. As the temperature increases, the pressure inside the vessel also increases. Once the pressure climbs to a suitable PSI, the valve of the vessel is yanked open, and the water molecules burst out of the vessel, and straight to the projectile, causing the projectile, to shoot out of the barrel at a deadly speed. If the scale of this procedure is amplified, and use a rocket as our projectile, we can successfully achieve 100% fuel efficiency in rocket launch, without using a singularity of fuel stored in the rocket. 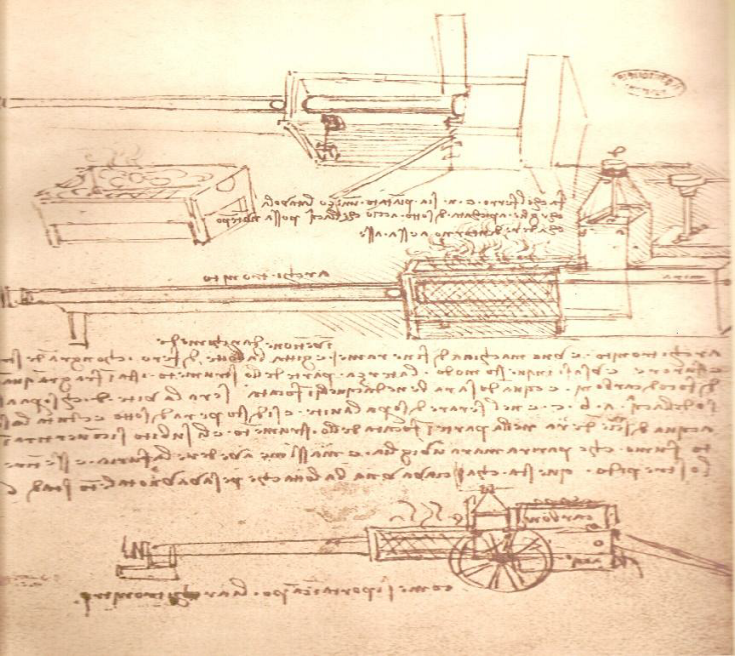 This paper consists of ideas proposed and implemented by Archimedes of Syracuse, in 214-212 BC, practical tests conducted by MIT (Massachusetts Institute of Technology), and also how we launch rockets into space. What this paper really is about though, how one of Archimedes projects can help us achieve 100% of fuel efficiency. A problem that great space associations like NASA, have been pondering upon for a very long time.

The Archimedes Steam Cannon, feared as a weapon of mass destruction, that was invented and used in the Siege of Syracuse, in 214-212 BC, is a Cannon that uses steam or gaseous H2O to push a projectile, such as 5-pound Iron ball, at a deadly velocity. Velocity so great, that it had the potential to destroy battleships in 214-212 BC.

This is a diagram from the ArchiMIT’s team, where students from MIT tested to see, whether this experiment really worked or not. And sure enough, it did.

According to Da Vinci’s drawings, we need a vessel or a tank that is capable of holding a lot of pressure, and add water inside the vessel. When the water is heated at really high temperatures in a closed system, the water molecules leave the liquid and start to populate the vessel. As the temperature increases, the pressure in the vessel increases, as the gaseous water particles exert a force on the inside of the vessel. After the pressure reaches to a considerable quantity ( approx. 4500 PSI),and the valve being yanked open, the projectile will be exposed to the burst of steam that was in the vessel, all at once, providing enough energy to shoot out of a barrel at a great speed. The ArchiMIT’s used this theory to conduct an experiment on 5th November 2006, by setting up apparatus with the following details: 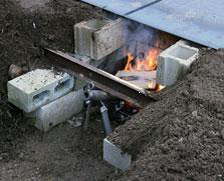 They observed the firings, which were aimed at a sand berm, on remote moniters, behind a hill, 150 feet away from the cannon. Two rounds were fired from the cannon, with the time to reload the cannon being close to 2 minutes. The muzzle velocity observed from a high speed camera was over 300m/s (approx. 630 mph). The shells kinetic energy was calculated to be approximately 23 KJ – which is 1.3 to 1.8 times the energy of a 0.50 BMG caliber bullet fired from a M2 machine gun (a comparison made by the ArchiMIT’s). Now with this data, we are safe to say that Archimedes isn’t wrong.

The experiments conducted above prove that Archimedes Steam cannon, is a plausible working idea. Using this idea we can achieve 100% fuel efficiency, to get a body or projectile such as a rocket or a shuttle, out of the earths atmosphere. It would be 100% fuel efficiency for the rocket as, we aren’t using the fuel stored in the rocket, but instead giving the rocket a little push from below, using the priniciples of Archimedes’ steam cannon.

Conclusion The Steam Cannon, can help us achieve 100% fuel efficiency in a rocket launch, which will help us last longer in space, and with the extra fuel we have to our disposal, we can travel a greater distance in space, and even decrease the weight of a the rocket itself, as the payload of the rocket weighs approximately 20 times less than the sections of the rocket that are dropped back to earth.

Our reader might find the following relevant published papers interesting:

One thought on “The genius of Archimedes; Sun-focusing mirrors and Steam cannons – The legend tested by modern Science”