This post brings to your knowledge the oldest known, so far, evidence of cat-taming in the world.

The bones of a cat were found near human bones in a grave uncovered in Cyprus, dating from 7,500 to 7,000 years B.C., during excavations carried out under the supervision of Jean Guilaine of the Collège de France (1). Jean-Denis Vigne, CNRS research director (2), showed that this was the oldest known evidence of the taming of cats.

It is generally taken for granted that cat domestication began in Egypt, with the first clear evidence dating from 2,000 years B.C. 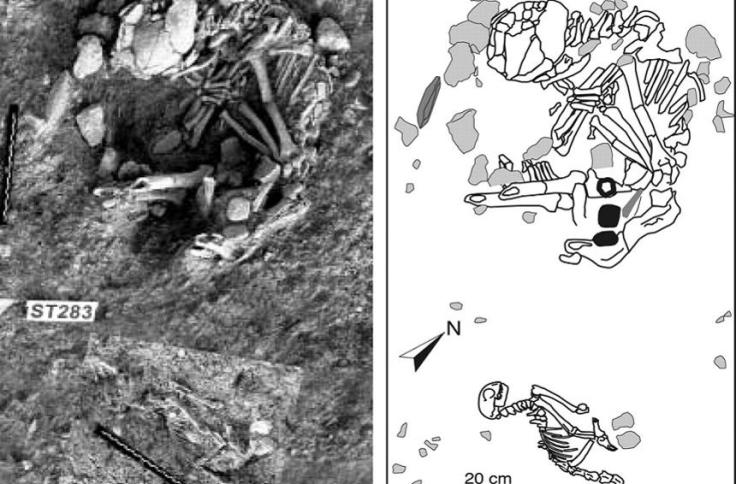 At the end of the 1980’s, the discovery of the jawbone of a cat on the island of Cyprus, at Khirokitia, in sediment from the Neolithic Age dating from more than 6,000 years B.C., had already suggested that the domestication of this species could have begun earlier and elsewhere than in Egypt.  The distance of the island of Cyprus from the continent and the absence of a local feline species during the Neolithic Age clearly implied that Neolithic populations had voluntarily introduced the animal to the island.

Digs at the site of Shillourokambos, led by Jean Guilaine under the direction of the Department of Antiquities of Cyprus and the French School of Athens, have recently unearthed a burial site in which a cat and a human are associated.  It dates from 7,500 to 7,000 B.C. Not only is it older by almost one thousand years than the first evidence of the presence of the cat in Cyprus, but it leaves no doubt as to the existence of a strong association between humans and cats as of that time, at least at the symbolic level. The cat buried with the human was approximately eight months old and had almost reached its adult size.  The morphology of the skeleton suggests that it was a big cat, similar to wild cats found in the Near East today. The morphological modifications of the skeleton associated with domestication are not yet visible, justifying the use of the term “tamed”, rather than “domesticated”.

“This particular relationship between humans and cats could have begun at the very beginning of agriculture, when cats were attracted into the villages because mice came to eat the stored grain”, explains Jean-Denis Vigne.

The complete body of the animal was buried in a small pit at about twenty centimeters from the human grave.

The tomb, particularly rich in offerings in comparison to other graves known from this period in Cyprus, suggests that the individual had a special social status.

Τhis grave certainly bears witness to relationships between humans and cats in the 8th millennium B.C., not restricted to the material benefit of humans but also involved in spiritual links.

Domestication and taming Archaeozoologists generally use the word domestication when they have good evidence for morphological modifications such as the decrease of the general size or the shortening of the face and tooth raw. However, morphological modifications may not appear for some considerable time after the original association with man. We use the term ‘taming’ for the early history of the domestic cat when no morphological modification is visible. In addition this term, which has also been used by Malek for the same stage of domestication, fits well the status of cat as an ‘exploiting captive’. Cultural situation of Shillourokambos. The cultural characters of the late 9th millennium Shillourokambos archaeological assemblages are very similar to those of the mainland for the same period. Indeed, it has now been established that Cyprus was settled by Neolithic farmers from the continent who brought with them both crops and herds.

Brief description of the human burial The sub-circular (55 x 60 cm) grave was situated in the upper part of the archaeological deposits, just under the 25/30 cm thick arable ploughed earth. It had been dug into the remains of a mud building which dates to the middle phase of the occupation of Shillourokambos. It contained the complete skeleton in primary position of a human of 30 years of age or older; the body, which had partly collapsed during decomposition, had probably been buried in a bag, in a semi-sitting position, facing West; the arms were crossed against the chest and his legs completely folded. The list of the ten ceremonial items is as follows: a marine shell, a stone pendant, a very uncommon discoid flint scraper, two small polished axes (one of them broken), a pumice stone, a fragment of ochre, a large flint piercing tool, and several non-retouched flint blades and bladelets. This is the only burial with such a high number of offerings for the whole Preceramic and Aceramic Neolithic in Cyprus.

Description of the cat grave and skeleton The grave was oval (43 x 25 cm) and ca. 15cm deep. It was dug into and filled with the same archaeological layer as the human burial, at the same level and 20 cm away from its southeastern edge. A small asymmetric mound of sediment all along the North edge of the grave was probably composed of the packed down-products of the excavation of the grave, attesting man-made excavation. The cat skeleton was complete, except the last lumbar vertebra, sacrum, pelvis, possible baculum, tail bones and a few elements of the limb extremities. The missing parts were all situated at the highest level, suggesting that the complete body had been buried and that the uppermost parts were destroyed by ploughing; the skeleton laid on its left side, the head to the West and the back to the South, i.e., in the same orientation as that of the human skeleton; the head was bent backwards in relation to the neck; fore and rear limbs were grouped under the stomach, respectively backwards and forwards stretched, but the removal of the limb extremities precludes any explanation to this peculiar arrangement. The finds have been withdrawn as a block, for laboratory excavation and casting. The entire skeleton was articulated, a small amount of movement to the anatomical arrangement being due to collapse during the decomposition process. There is no indication about the origin of the death. Microscopic examination did not reveal any cut or burn marks. The absence of significant quantities of sediments between the right and left rib series indicates that the thoracic cavity had not been opened before the burial.

Though severely damaged, the skull was sufficiently well preserved to allow a good determination of the species among the different small felids of Western Asia, according to the morphological criteria which allow clear-cut distinctions between them.